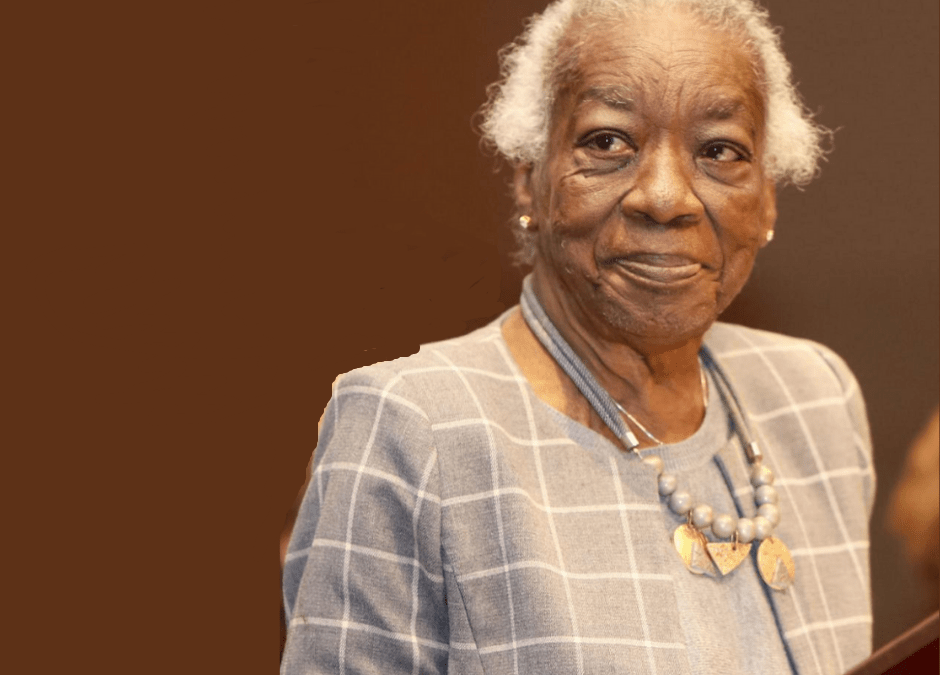 My dad sent me an obituary last month.

It was a notice from the Madison, Wisconsin, Black Chamber of Commerce, and the deceased was a woman named Milele Chikasa Anana. In his note, my father explained, “You would have known her as Betty Latimer.”

The instant I read the name, a memory hit me like a ton of bricks.

“Was that the woman who came to stay with us because the Klan burned a cross on her lawn?” I asked.

“You have a good memory,” my dad responded.

Racism was explained to me at a young age.

When I was five years old, my family lived on a rented farm in Amherst, Wisconsin. We were poor white trash, and food stamps helped keep the family fed. Food stamps, and the animals on that farm. We gathered our chicken’s eggs for breakfast, had a small garden, and when the pain-in-the-ass of a rooster chased my mother one too many times, he became dinner.

One summer day, a woman and her two daughters came to visit us. They were black, though I couldn’t have told you that at the time. To me, they were just people. Children see the world through innocent eyes; adults are the teachers of difference, intolerance, and hate.

The girls and I ran around doing whatever it is kids do.

We probably played in my tree house, and I bet I showed them what a daredevil I was by putting on my Superman cape and running through the bull’s field. That was the roulette I played as a child. I would wait until the bull was on the far end of the field, then I’d enter his space and race to the closest fence.

My red cape would drift along behind me, which usually caught the bull’s eye. He wouldn’t charge every time, but he did so often enough to make it exhilarating, and dangerous. It was a race to see who was faster: the bull coming from the far side of the field toward me, or me darting from fence to fence on the near side. My mother hated that I did such a thing, and shouted “STOP THAT!” constantly, but I continued to race against death anyway. Mostly because I had no concept of death, or danger, really.

(Now that I’m a parent, I can only imagine the fear I’d feel if I saw my almost-six-year-old son taunting a penned bull.)

At some point during the day, I caught wind of a serious conversation.

While we kiddos were being gleeful, the adults were somber. It turns out the trip wasn’t made for the sake of visiting friends, the family was seeking respite from the outside world.

Betty Latimer was an activist; a champion of black rights. Certain white folk in northern Wisconsin didn’t take to that kindly, so they decided to send her a message. A hateful, know your place message. This was explained to me in very plain terms.

As a child, I didn’t understand why someone would want to target the girls I was playing with or their mom just because they looked different from me. To be honest, time hasn’t changed that confusion very much. Sometimes I find it amazing that it’s 2020, and we still haven’t overcome such stupid things as racism, sexism, or homophobia. It all seems like an episode of The Twilight Zone.

(“Imagine if you will, a world where skin color determines whether or not a person has value…”)

Then again, everyone has known since forever that smoking makes you smell horrific, rots your mouth and teeth, and oh yeah, causes cancer. Yet people still smoke. Which means speaking truth to stupid is like your favorite metaphor, be it “herding cats” or “kicking water uphill.”

Anyway, Miss Latimer wanted to get away from her house for a day and leave the hate behind, so she came to our farm and visited with us. I played with her girls, and that was that.

In all honesty, that’s the only memory I have of her, but it is an experience that helped my parents shape me.

Because of their straightforward explanation of racism, it was burned into my brain.

(A few years later, my parents would give me the same frank discussion regarding homosexuality. My uncle was gay, and one summer we visited him and his partner in Provincetown, Massachusetts, a “gay mecca.” I saw men holding hands with men, and women holding hands with women, tugged at my mom’s shirtsleeve and asked, “What’s up with that?” I was told: “Well, some men like women, some men like men. Some women like men, and some women like women.” It was said with a shrug, but not indifference. “Such is life,” if you will. As a child, so as you’re told, so you will believe. If you treat something normal as normal, kids will absorb the information correctly. If you treat normal as abnormal, then the child will start down the path of troglodyte in training, e.g. “Dur, gay is a sin!”)

Fortunately, the cross burning backfired; Betty Latimer wasn’t cowered into silence, she steeled herself and redoubled her fight for black rights.

According to her obituary, Betty Latimer adopted the name Milele Chikasa Anana, which means “a rare and sparkling jewel.” She wrote for Essence, Ebony Jr., and The Black Scholar, and worked as a Professor of English at Florida A & M. She Marched on Washington, and worked with the NAACP during the Boston bussing crisis.

In Wisconsin, she ran for the Madison School Board, was elected, and became the first African American in Wisconsin elected to public office in this capacity.

I may not remember her well, but the fact Betty Latimer knew my family left an indelible mark on me.

Give a click and examine more of my writing on Amazon.