Eminem: A Revisionist History Not Told by Malcolm Gladwell 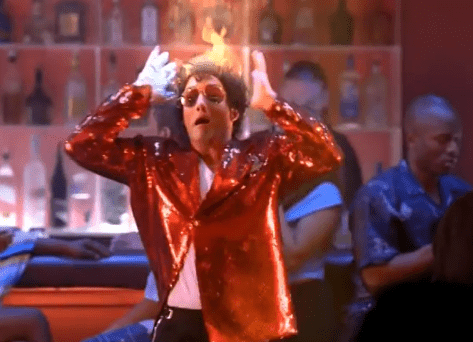 If you don’t listen to Revisionist History, the Malcolm Gladwell podcast, you should.

Season one is pretty fantastic; seasons 2 – 4 have a couple gems in them.

Every episode involves Malcolm examining something we think we know everything about, and adding a twist to it.

Think Kitty Genovese. For many years, her murder was used as a shining example of big city apathy. When put under a microscope, however, it was discovered everything we thought we knew was a lie. Malcom does that with myriad topics in his podcast. From the runaway Toyotas of 2009 to the Boston Tea Party, a new light is shone on an old event.

Which had me thinking about Eminem, and his 2004 hit Just Lose It.

A single from his album Encore, the song made it into the top 10 worldwide. It made it to #6 on the Billboard Hot 100 in the United States, and went to number 1 in a handful of countries.

The video for Just Lose It went into heavy rotation, because MTV actually played music videos back then. It also generated considerable “controversy.”

Eminem, long known for mocking pop culture, took some jabs at Michael Jackson in the video. He made fun of the Pepsi incident where Michael’s hair caught on fire, mocked the perpetual surgeries MJ was having, and alluded to the pedophilia charges that had been surrounding Jackson since the early 1990s.

The video for Just Lose It made Jackson and his supporters angry.

Man-on-the-street fans were outraged, and several celebrities added their voices to the cacophony. Steve Harvey said, “Eminem has lost his ghetto pass. We want the pass back.” Stevie Wonder described the video as “kicking a man while he’s down,” as well as “bullshit.” Geraldo Rivera parroted the Wonder quote, stating “He (Eminem) is bullshit,” and record producer Raymond Scott asked BET to remove the video from their rotation. BET complied.

Michael himself went on record, stating, “I am very angry at Eminem’s depiction of me in his video. I feel that it is outrageous and disrespectful. It is one thing to spoof, but it is another to be demeaning and insensitive.”

(Jackson also asked (or demanded, depending on which article you read) that all video channels stop playing the Eminem “homage.”)

What’s odd/funny/dumb about the outrage is threefold: first, it’s laughably amusing that a song titled Just Lose It caused people to lose their shit. I mean, how perfect is that? Second, none of the offended parties had a problem when Eminem was making fun of Limp Bizkit, Moby, Britney Spears, Christina Aguilera, Elvis, or any other pop star that had already been mocked by the blonde rapper. It was a simple case of hypocrisy. Either what Eminem did is disrespectful to everyone, or everyone is fair game. You can’t pick and choose.

The third reason the outrage was odd/funny/dumb is: by 2004, Jackson had already been brought up on pedophilia charges, the rumors of his surgeries/sleepovers/overall-eccentricities had been running rampant for years, and he was facing another round of pedophilia charges.

There’s an old saying: fool me once, shame on you. Have repeated charges of pedophilia leveled against you while openly discussing your young-boy slumber parties, and, um… won’t get fooled again? Something like that. Google it.

Anyway, it’s 2019, and the Leaving Neverland documentary pretty much sealed the deal when it comes to whether or not Jackson was into buggering boys.

Turns out, Eminem was right when he figured Jackson was worth poking fun at. And, to repeat, the stories and charges were out there. This wasn’t something Eminem just dreamed up; people knew what Jackson was up to. If they didn’t? That was them being willfully ignorant.

Compare the Eminem video ruckus to Sinead O’Connor’s 1992 appearance on Saturday Night Live. If you don’t remember, Sinead torpedoed her career by tearing up a picture of the pope in protest of church sanctioned molestation. The world was outraged, which confused me. I remember watching the program, live, and thinking, “Ballsy. Good for her.”

I had no idea the outrage being honest would spark, and foolishly figured that tearing up a picture of a tottering old figurehead was fair game. I mean, people in 1992 knew the Catholic Church had a molestation problem. Like with Jackson in 2004, if people didn’t know about the Catholic Church, it meant they were just playing ostrich. Only they had their head somewhere more personal than buried in sand.

Which brings us to revisionist history of Eminem.

Basically, I wonder how everyone blasting Eminem in 2004 feels now? Have any of them come forth and apologized? Has anyone–either Steve, be it Harvey or Wonder–admitted to being on the shit side of history?

It’s interesting how quickly people cough, murmur, and turn away when discovering they backed the wrong horse. They dismiss it as haven taken place a long time ago, or use selective amnesia to forget they ever took a bad position. People will ignore reality, and pretend events that don’t mesh with their stances never happened. Which, in this case, is fine. The song was a hit for Eminem; the outrage didn’t even so much as create a speedbump to his career.

If anything, examination of the “Just Lose It” controversy should be seen as a cautionary tale about knee-jerk reactions.

Unfortunately, it won’t be a cautionary tale for anyone, because we are still a nation fueled by outrage.