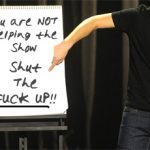 In his teaser to Season 3 of Revisionist History, Malcolm Gladwell “debated” his friend, professor Adam Grant.

I put “debated” in quotes, because it was more a friendly conversation than anything else. They did, however, have disagreements, including one right out of the gate.

Grant asked, “What is the occupation that has the most insight into human nature, and human behavior?”

“Totally disagree,” he stated, before going down a completely misinformed path of how stand-up comedy works.

Gladwell stated comedians deal with people in a “tightly controlled setting,” and that he “cannot imagine an easier set of circumstance for navigating a social situation” than that of a stand-up comedian. “They go to Vegas, and they go to the Comedy Cellar… they control their environments.”

The idea is simplistic, and incorrect.

Most people don’t realize this, but comedians don’t always perform in comedy clubs; we go wherever the paycheck takes us. Bars, casinos, cruise ships, corporate parties, weddings… every situation is different, and many are less than ideal, not “tightly controlled.”

Sometimes the bar won’t tell its patrons they decided to have a comedy night, so you’re dealing with surly regulars completely disinterested in jokes. Even better: bars will occasionally leave the televisions on in the background. Especially if there’s a major sporting event going on. The owner will state quite clearly that doesn’t want to upset people not interested in comedy, so you can just “Talk over the TVs.”

Then you have rules; clubs aren’t free-for-all champions of the 1st amendment. Some dictate what you can do and say while on their stage.

Many clubs serve food to increase their bottom line. Try and perform while dinner is being served, and people’s heads are bowed.

Add to all of the above, the aspect of couples. Many people at comedy clubs are married, or on a date. In those situations, sometimes one person is placating their partner. They aren’t really interested in comedy, it was just their partner’s turn to choose on date night.

(To that end: half the room might have voted for one candidate, and the other half the opposing party.)

It’s varied, and comedy is the only place where the general public expects to just show up and be catered to.

Jazz musicians don’t get booked at rock clubs, and the entertainment director of a hospice probably wouldn’t hire a hip-hop artist for Sunday afternoon activity time. No one would contract a carnival caricaturist to paint a family portrait, and it is doubtful you’d pay a still-life photographer to shoot your wedding.

Comedians, however, are expected to be universally amusing.

People expect to just show up at a comedy club and be entertained to their liking. Even though individual members of an audience have varied tastes in food, music, clothing, and comedy, whatever comedian is on stage at the moment is expected to appeal to all of them.

It’s technically not fair, but to quote Omar: “It’s all in the game.”

Expanding the “varied tastes in music” analogy, when it comes to music you have people who enjoy rock. There are fans of country. Hip-hop. Classical, and anything and everything across the radio dial.

When people go to a concert, they know exactly who they’re going to see. It’s why you don’t find cowboy hats at a Kendrick Lamar show, and you’re not going to come across too many sixty-year-old men at an Ariana Grande concert.

If you’re an unknown comedian, however, people just decide to go to the local comedy club. You’ll have an audience full of people who like country, jazz, hip-hop, rock-and-roll… and the comedian is expected to make them all laugh.

They might all like “comedy,” but as stated above: that’s a generic term. People tend to have wildly different ideas as to what’s funny.

Gladwell also believed stand-up comedy is easy because everyone is “doused in alcohol.”

“Have you ever given a performance before a group of people who have been drinking?” he asked. “They’re like putty in your hands.”

Gladwell is suffering from the delusion that people will have one, maybe two drinks, get a nice, warm buzz, and settle in and behave.

While having a drink or two works for some people, there are always those who like to drink hard. Does the concept alcohol makes people more difficult to control really need explaining to someone as learned at Malcolm Gladwell?

They shout out. And I’m not just talking about rude or angry hecklers; there is nothing more disheartening than someone that’s overly enthused at a comedy club. Someone whooping and trying to “help” the comedian. When a club owner has to settle down someone having too much fun, it’s depressing. They go from being in a great mood, to sullen.

In a comedy club showroom, people yell. They argue with one another. They order their drinks like they’re sitting in a helicopter, and no matter how many times you tell them up front to silence their cell phone it’s still going to go off and ruin a comedian’s punchline.

Maybe Gladwell doesn’t have hecklers at his shows, but comedy always seems to invite interaction. No one shouts “Yo, Hamlet! You suck!” at a play, and it’s been joked that no one brings their own guitar to a rock concert and challenges the band on stage, but at comedy shows—thanks to a combination of alcohol and Gladwell-like feelings toward comedy—it happens. People treat the showroom like it’s their living room; comedy is the background noise to their conversation.

To be fair, I should hashtag that #NotAllPeople.

The majority in any audience are great. But all it takes is one or two belligerents to waylay an entire show. And if you have the idea hecklers are removed from clubs, that’s not always the case. Better clubs police their rooms; less-than-stellar clubs say, “Hey, that table is buying the most alcohol, so they stay.”

The comedian is left to deal with it.

The long and short of it is: comedy isn’t easy.

You have to be able to read audiences. You have to draw them into your world, and make them laugh on your terms.

Malcolm Gladwell said, “comedians like to pretend that their profession is a terrifying, death-defying high wire act,” and that he would do a stand-up performance a million times before he would teach a class of first graders.

I don’t know a single comedian who thinks of our profession like that description. Being a comedian is a job. It can be compared to a garbageman, teacher, or author. It’s neither death-defying nor terrifying.

My friend, comedian Bengt Washburn nailed it with his take:

I think [Gladwell] has spent the last decade addressing his fans. He has never had to earn the respect of an audience with his voice, he did that with his writing (and that is very hard). But then this success has skewed his own sense of his performance abilities.

I am sure making his adoring fans laugh is pretty easy. But how would he do as an anonymous face trying to win over a crowd with jokes? It would take him his 10,000 hours just like the rest of us. I think he saw a few comics in a club (which is an ideal setting) making the high-wire act of standup look easy, so easy that he didn’t even notice they were walking on a high wire.

Then he compared that to his experience speaking in front of his own fans and from there he drew his conclusions.

There’s a misguided perception that stand-up comedy is easy; that anyone can just get on stage and do it. If Gladwell really thinks stand-up is easy, I say fair enough.

He should go do it.

Not as “Malcolm Gladwell, famous guy catering to people who already like him.”

He should attend random open microphones. He should hit the stage anonymously, like any unknown beginner, and tell jokes for ten minutes. Many comedians have proven they can be authors and podcasters; Gladwell should prove he can do a comedian’s job and bring the funny.

He should go somewhere where nobody knows who Malcolm Gladwell is; remove his security blanket of fame, and stare down a room of drunks that expect to be amused.

I believe the experience would be sobering.

Want to read more? Give my Amazon Author page a glance.