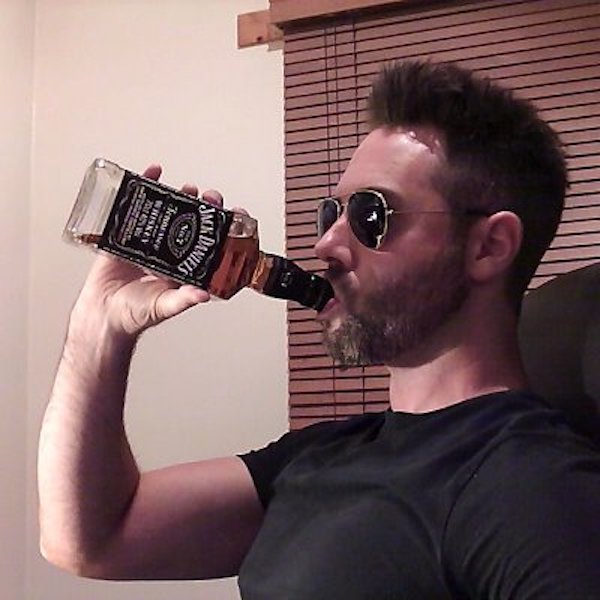 In August, 2020, my good friend Robert introduced me to The Critical Drinker.

I’d just seen Christopher Nolan’s latest release, Tenet, and posted a status full of contempt for the film. Reading my complaint, Robert linked me to a YouTube review by The Drinker, who exorciated the movie. The review was thoughtful, funny, and intelligent.

I did a little browsing, and ended up watching several more Drinker videos. His take on Avatar made me laugh out loud, and more importantly, was everything I’d always thought about the movie but was too inelegant to put into words myself.

In short order, I became a fan of The Drinker.

The Drinker reminds me of Oscar Wilde in that he’s an artist, and a critic. These days—or maybe it’s always been this way—you’re either one or the other. Artists cannot be critics, because they cannot be honest with their peers. When was the last time you heard anyone in Hollywood criticize a colleague’s product?  If you criticize their movie, they’ll criticize yours, and that would make you a sad panda. Hollywood egos are too fragile to withstand truth.

Conversely, critics cannot be artists. When they try, they become Roger Ebert writing Beyond the Valley of the Dolls. Yes, it’s now “fresh” on Rotten Tomatoes, but that’s only because modern reviews have delighted in its “camp.” At the time (and in reality), it was (is) a critical failure.

Returning to the point at hand: The Drinker is an author. He’s someone who writes for a living, and therefore understands narrative structure and the importance of good storytelling. Thus, his biggest criticisms are leveled at contrived plot devices; moments where something happens not because it’s logical, but because the story needs to move forward. The Drinker isn’t simply a fanboy either cheering for or crowing about movies, he’s a logical thinker who enjoys quality work.

I subscribed to The Drinker’s channel, and now devour his releases when they arrive.

Over time, I’ve discovered something about his fan base. Since The Drinker is a stalwart champion of good storytelling, he doesn’t get distracted by identity politics or current trends. Therefore, he doesn’t forgive a movie for being horrible just because it’s politically correct. In fact, The Drinker’s vocal contempt for those who pander to current political trends at the expense of good filmmaking is a breath of fresh air in today’s climate.

Unfortunately, that also tends to draw a crowd that’s just there for the “anti-PC” elements of his rants. Which is sad. The Drinker shouldn’t be defined by one aspect of his personality, but I worry that’s what’s happening. I worry that there’s a segment of his fanbase that only tunes in for takedowns of the woke filmmakers.

When The Drinker goes all in on a rant against an inferior product—Wonder Woman 1984, or the 13th season of Dr. Who—the count explodes. But one of his lowest rated reviews is also his best: It’s A Wonderful Life. The Drinker praises the hell out of It’s A Wonderful Life, and does so with all the scrutiny and wit with which he demolishes a bad film. Despite this, the video is one of his least watched reviews.

I don’t know if this is a sign of “If it bleeds, it leads,” where anything scandalous is more exciting than something benign, but there is a pattern on The Drinker’s page: his recommendations—Die Hard, The Thing, Jaws, Dredd—all rank lower than his scathing takes. The Drinker doesn’t put less effort into his recommendations, but people just aren’t as interested in them.

The reason I’ve titled this “The Positivity Paradox,” then, is because we as a species enjoy positivity.

We feel better when our lives are going well. So why do we seek out and enjoy negativity? Not that The Drinker is negative, but his examinations of films he doesn’t like… are they inherently more compelling than his praise of films he does like? I don’t have answers for these questions, I’m hoping a comment or two will explain things to me.

If I were to make one guess, it would be the idea that everyone enjoys a real, live, “emperor has no clothes” moment.

When Hollywood spends north of $200 million in order to dress up something like Star Wars: The Last Jedi, having someone like The Drinker point out the film isn’t wearing anything at all makes us feel better. Like we’re not crazy. Hollywood spends so much money trying to sell us complete garbage, it’s nice to know that there are others out there not buying it. The Drinker has created a sort of community; a band of folk who realize, “Hey, we’re not so alone in the world.”

The Drinker is intelligent, and there’s no doubt he’s made note of what gets the most hits on his channel.

I hope that doesn’t mean he forgoes his critical takes of praise, even if he knows they won’t get as many hits as a video where he picks apart a bad movie.

And if he would do an in depth analysis of the best movie of 2020, Money Plane? That would be amazing.

Want to read more of my nonsense? Give my Amazon Author Page a gander.