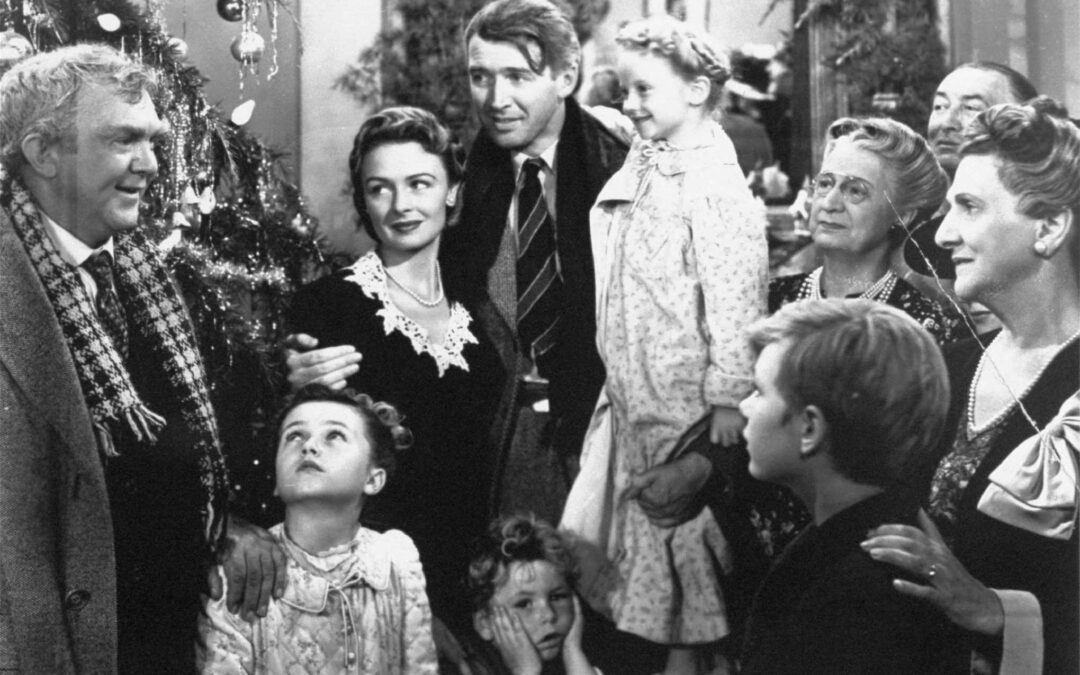 The man we all miss, Phil Hartman, played Uncle Billy, and in the sketch he remembers accidentally giving the missing deposit to Old Man Potter. The gathered masses thus rush to Potter’s bank and kick the crap out of him.

It’s hilarious, and in a way, cathartic. I mean, we all wanted to see Potter get busted, right?

Well, 1986 was over thirty years ago. It’s time for an update. We need a new ending that both skewers our present-day politics, and exposes us for who we are today.

The turning point would be right before George Bailey heads out to the bridge, in the bar. After he prays for help, George is laid out by the husband of Zuzu’s teacher. If you remember, that teacher “let” Zuzu walk home with her coat unfastened; Zuzu didn’t want her petals to be crushed, after all. The teacher had called the Bailey home to check in, and in a fit of anger, George tore into her. At the bar, when George’s identity is discovered by the teacher’s husband, he decks George and shouts him down; “It isn’t enough she slaves teaching your stupid kids to read and write and you bawl her out!”

That’s where the new ending begins. Instead of the celebratory, joyous finale we’re all used to, or the “get Potter” ending SNL gave us, things take a darker turn.

We live in an era of woke perfection, where no matter what you’ve done with your entire life, one moment is enough to get you “canceled.” Twitter mobs arise and take action, shaming whoever needs shamed, made an example of, or cast into the cornfield. George being shunned instead of supported would be the modern take of It’s A Wonderful Life.

“What?” woke activists would shout. “George Bailey insulted a teacher? A hero?!“

Their indignation afire, people would start talking about how evil he is. They would write opinion pieces for the Bedford Falls newspaper. They’d boycott the Bailey Savings & Loan, and decry anyone who dared use the business. George’s friends would fall to the wayside. Not because they don’t like him, but because it’s just not worth it to get involved and defend him. The mob is fickle, after all, and once they’ve got a victim in their sights anyone who dares stand up for that target is fair game as well. Collateral damage, so to speak.

Instead of rewarding George for his lifetime of good deeds, he would be a pariah because of one moment of anger.

Because that’s where we are today.

We don’t forgive, we don’t take things in stride, and we don’t understand that people are fallible.

Or, maybe we do understand that people have good and bad moments, and that society changes, or that what might have been “acceptable” back then isn’t anymore, or that sometimes people change and don’t act the way they used to… and we just don’t care. We don’t care, because it’s easier and more fun to shame someone else than it is to monitor growth in a person.

Maybe it’s more fun to attack than it is to live your own life. Maybe some people lead such miserable lives that attacking others is the only way they can feel satisfied. Or maybe we believe that if we join the mob and attack others, we can keep the focus off of us and all our failings.

I’m spitballing here, but the turning point doesn’t even have to be George yelling at the teacher; it could be something he did or said years earlier. Sure, the Internet wasn’t around then, so there aren’t any old Tweets to dig up, but I’m sure something could be found…

The incident with the robe and bush! Instead of gallantly (and immediately) giving Mary back the robe and averting his eyes, George toyed with the situation a moment, a clear example of patriarchy and cisgender white male privilege.

Because again: that’s how we work. Even if you’ve done nothing wrong in the present, something from your past is worth digging up and attacking you for.

Look, I might not have the script written, but I’m certain I’m onto something.

Hey! Check out my comedy over on Spotify! Exclamation points!

(Also: this isn’t the first time I’ve written about this movie. Read more, yo.)