Comedy and the Art of Lying 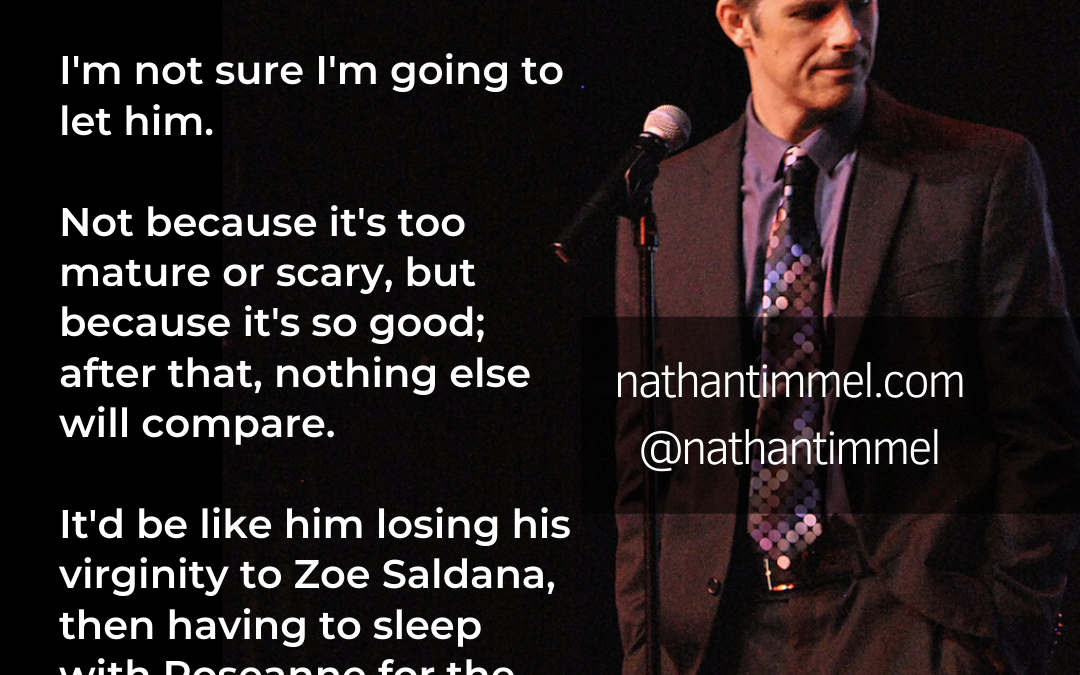 There are two approaches to comedy.

There are a thousand styles of comedy—storytelling, prop, parody songs, setup & punchline, etc.—but there are two approaches. One is, “How can I invent something funny?” The other is, “I think this might be funny if I tell it right…”

I use an ellipsis at the end of the second sentence because of the trail off it suggests you’re at the beginning of a joke. There’s an idea forming, but it hasn’t taken hold or gestated yet. Something has sparked the creative part of the mind that makes a comedian want to arrange words in a manner best eliciting a giggle.

I’m that latter form of comic; I’ve never been the former.

I cannot sit down and “write” a joke; nothing in me has ever said, “Time to be creative… OK, airline food. That’s funny, right?” I have to have an experience, or a “magical thought.”

(By that, I mean that sometimes jokes just pop into my noggin uninvited. But I’ve discussed that already.)

Sometimes I wish I was able to just dream stuff up. The ability to sit down with pen and paper, ponder upon the joys known as airline food, and then come up with jokes about it might be easier than waiting for life to happen.

Once something amusing does occur to me, then it becomes a matter of deciding how honest I want to be. Which means, yes, I lie onstage. Sometimes it’s to protect people—I’ve told many a story about a friend and changed their name—but most often it’s a lie used to get a bigger laugh than the truth might.

One of my jokes that “just happened” involves my son. He’s six years old, and after watching a couple of the Harry Potter movies, he expressed an interest in reading the books. In fact, he straight up asked me, “Can I read the Harry Potter books?”

In an instant, I had a joke.

Here it is in what the kids call “meme” form. 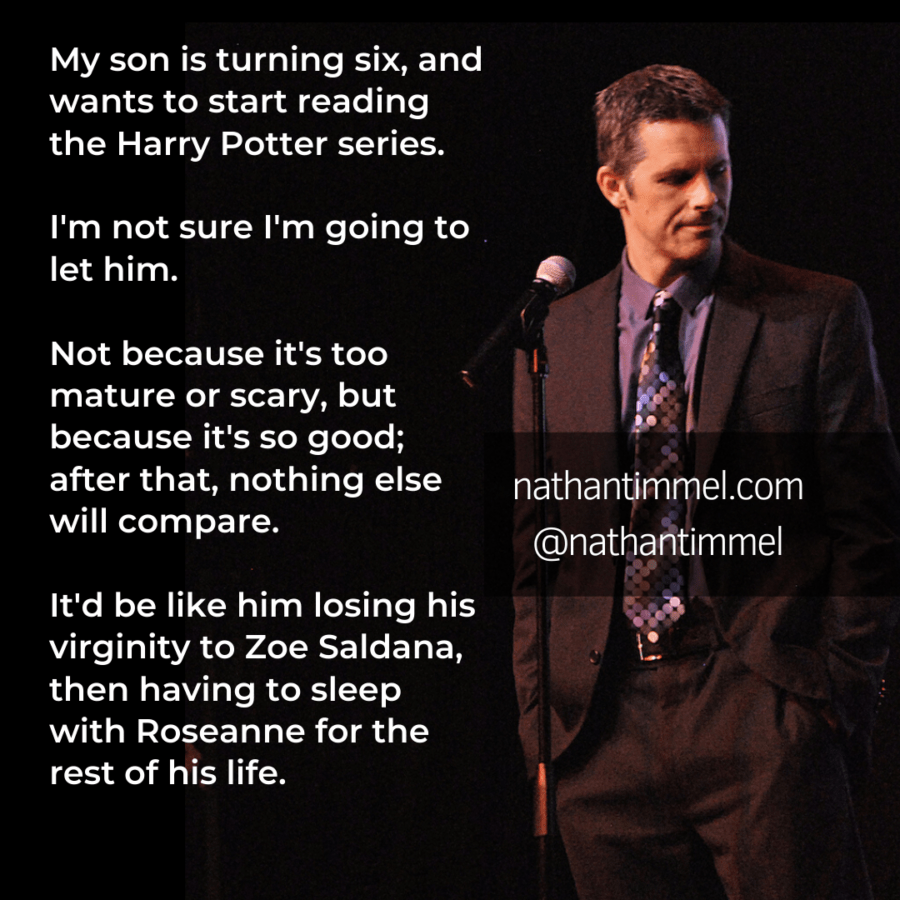 That’s the way I posted it online, and did quite well.

When I’ve said it live, it gets a good laugh, too…

But when I changed part of it to a lie, it got a huge laugh.

What did I change? I swapped out Zoe Saldana for Scarlett Johansson.

Which is a lie; I’m not all that into to Scarlett. She’s by no means unattractive, she’s just not my type. If I wanted to be really honest, I’d use Anna Kendrick—she’s my #1 celebrity crush. But neither Anna nor Zoe is as popular or widely recognized as a sex symbol as Scarlett. So, I alter the joke—make it slightly less personal—in order to get a bigger laugh. And it works.

Am I selling out?

Maybe. I don’t know. Maybe that’s why I’m writing this; to see if anyone responds with an answer.

I know some comics will say “Be pure!” while others won’t care.

Let me give one more example before you pass judgment.

One of my oldest and best jokes involves a former roommate, “Roy.” Now, to be fair, I did have a college roommate named Roy, but this joke isn’t about him. It’s about another friend, one I want to protect because of the joke. So I swapped out one roommate for another.

The joke is: “My college roommate Roy is my dad’s hero; he always brings him up. ‘How’s Roy doing? Talk to Roy lately? I always liked Roy…’ Well, Roy screwed his life up, so I gave my dad a call to shove it in his face. I told him, ‘Roy got the girl he was about to break up with pregnant, now he’s stuck in a loveless relationship, with a kid he doesn’t want, and he doesn’t know what to do. What do you think of your hero now, dad?’ Without skipping a beat, my dad said, ‘Eh, maybe I should give him a call. I been there.'”

That joke contains two lies. The first, as said, is in the use of “Roy.” I’m protecting a friend, which is important. I never wanted my actual friend’s kid to hear the joke and… well, know the truth.

The second lie is in the actual conversation with my dad. When I told him about “Roy” getting the girl he wanted to break up with pregnant, my dad grew thoughtful. What he actually said was more along the lines of, “Hmmmm… well, I have a little experience there. Maybe I should call Roy, and talk him through it.”

Same sentiment, just not as funny as, “Eh, maybe I should give him a call. I been there.”

What my dad said is too wordy; what I did was to boil it down to its essence.

(I also add a gruff, drunken tone to replace the thoughtful one my dad actually had.)

Again, is that OK? Both the ‘Harry Potter’ and ‘Roy’ jokes are based in truth; they’re actual events that happened to me that I then nudged into something stageworthy. But does altering the truth diminish the craft of comedy? Or does it enhance it? I’m sure at one point in my life I would have argued for purity, while now I’m no longer so sure.

If you’re reading, and you have any thoughts on this glimpse behind Oz’s curtain, I’d be damn curious to hear them.

Other than that, I suppose I’m writing to let you know that I am a dishonest man.

But at least I’m honest about it.

Want to hear more of my dishonesty? I’ve got comedy aplenty on Spotify.