Flickerstick, and the Importance of Passion 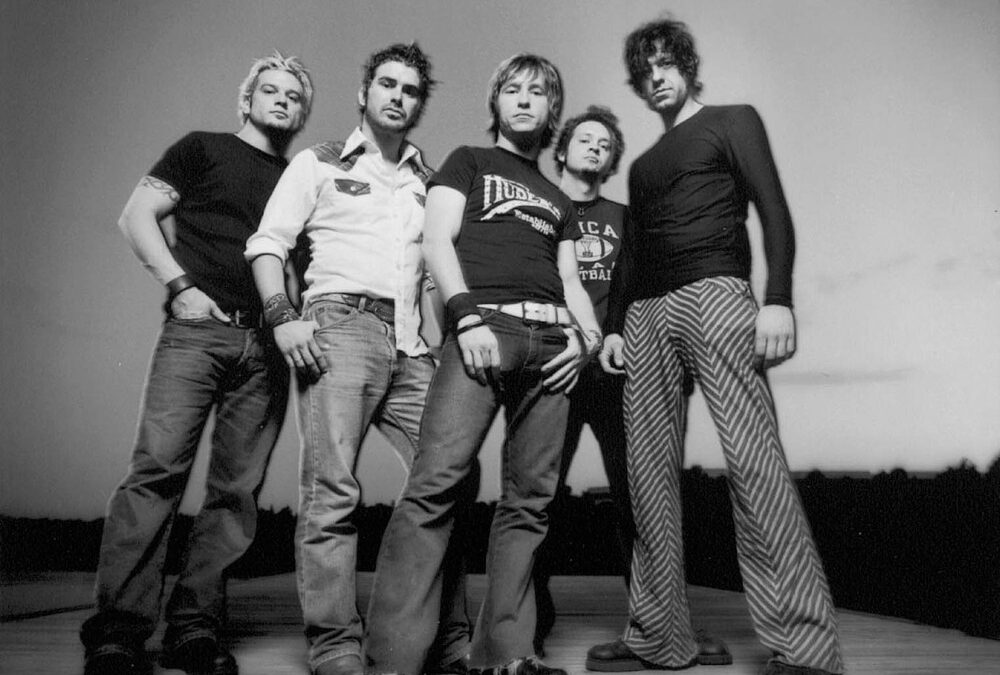 “Hey… Look at me, causing a catastrophe…”

~Direct Line to the Telepathic

In 2001, VH1 aired a reality program called Bands on the Run.

You probably haven’t heard of it, because the show tanked. I don’t know what the official ratings were, but there was only one season. Had it been a hit, like Survivor, it would still be running.

Four bands competed for $100,000 worth of equipment, $50,000 in cash, a professional music video, and a showcase in front of industry powerhouses. Each band got $20 a day, a phone card, a gas card, and 2 hotel rooms. They had to drive from Chicago to Miami, stopping in a handful of cities along the way, and perform on the same night at different venues. The goal was to raise more money than their counterparts, which was done via a combination of ticket and merchandise sales. Every few weeks, the band with the lowest cash total was sent home.

Those bands were The Josh Dodes Band, Harlow, Soulcracker, and Flickerstick.

Flickerstick was perpetually last in sales; they were portrayed as a group of loveable, slacker drunks. They stayed out all night, slept all day, fought with one another, cheated on girlfriends/fiancés, and avoided responsibility like the plague.

Conversely, Soulcracker were the hustlers. They were up every morning, booked extra shows, pushed merchandise, handed out flyers… They. Were. Driven.

By the final show, Flickerstick was behind over $3,000 to Soulcracker.

“Wait,” you say. “If Flickerstick was perpetually last in sales, how did they make it to the end?”

Flickerstick, by popular consensus, had two things going for them: great songs, and a fantastic live show. In the world of art, it doesn’t matter how hard you work behind the scenes; what matters is your final product. When stacked up against the other three bands? Flickerstick had the edge. Harlow and The Josh Dodes Band each had their niche, and Soulcracker had drive, but Flickerstick had that intangible something called “it.”

So, The Josh Dodes Band went home first, Harlow second. The championship round was between Soulcracker and Flickerstick.

They decided to win the battle of the bands, which created a problem: Soulcracker had come in last in previous battles. Ambition allowed them to eyeball the finish line, not popularity.

What could a band that couldn’t win on merit do? Rig the system.

The final contest was in Miami. Once Soulcracker got to town, they began a slander campaign against Flickerstick. They made friends with a few local bands and told those bands that Flickerstick played “corporate rock.” They said the only way to save hard rock (their genre) was for the local bands to show up with as many fans as possible and vote for Soulcracker.

Basically, they tried to stack the audience.

Which leads me to a question: is it better to lose with integrity, or win at all costs?

When I was younger, I might have said “win at all costs,” but the older I get, I lean toward “lose with integrity.”

I’ve been a part of many a comedy competition, and quite a few are based on a biased audience vote. The producers aren’t shy about this; they flat out say, “The more people you bring, the better your chance of winning!” They aren’t trying to create an impartial environment where anyone can win, they’re actively pushing comedians to sell tickets for them.

Returning to the final battle of the bands, Soulcracker wasn’t coy; they flat-out told the cameras they were going to attack Flickerstick at every turn. What’s funny is that even though they were trying to juke the numbers, they also displayed incredible arrogance. After admitting their plan was to slander Flickerstick, the members of Soulcracker would turn up their noses and say, “We definitely think we’re the better band.”

The thing is, actions speak louder than words.

If Soulcracker actually thought they were the superior band, they’d have allowed the situation to be neutral. They’d have gone on stage, done their thing, and trusted in both their abilities and the audience. The battle would have played itself out accordingly; a musical version of Thunderdome—two bands enter, one band leaves. Soulcracker was thumping their collective chests—“We’re awesome!”—while avoiding a merit-based conclusion.

Which leads me to believe that despite all the outward appearances of confidence, deep inside, Soulcracker was scared.

The thing is, I don’t think they could verbalize their anxiety, or even understood their own emotions. In fact, I’m not sure Soulcracker actually understood… well, music. An odd statement to make about a band, but I’ll explain.

Their conceit toward Flickerstick peaked right before the final battle of the bands. Throughout the show, bands were given “bonus opportunities,” which were mini contests that allowed bands earn more cash toward their overall total.

The penultimate bonus opportunity was a “battle of the players.” Each band was to have their drummer and one guitarist compete in a one-on-one showcase; drum solo vs. drum solo, and guitar solo vs. guitar solo.

Soulcracker pounced on the opportunity; Flickerstick ran the other way. The drummer for Flickerstick actively refused to take place, stating he had no clue how to play a solo. The guitarist representing Flickerstick made a joke of his slot, playing a few atonal licks and rubbing the guitar on his jeans. Like the drummer, he explained that he had no clue what to do if performing by himself.

The guitarist and drummer for Soulcracker won their respective contest easily, and as a whole the members of Soulcracker made scathing remarks about how they were much more “proficient” musicians than anyone in Flickerstick.

Meanwhile, Flickerstick was using confessionals (asides to the camera/viewer) to explain where they were coming from. This explanation boiled down to one thing: songs are important, not cool licks. Flickerstick’s guitarist knew he didn’t have the skills of an Eddie Van Halen, and it didn’t bother him. As a musician, he played to his strengths: as a member of a band.

What Flickerstick lacked in professionalism, they made up for in passion. As individuals, the members of Flickerstick weren’t savants, but as a group they made magic. A musical Voltron, if you will.

What Soulcracker didn’t get was that music isn’t technical, it’s emotional. Sure, Soulcracker could hit all the right notes, but Flickerstick hit their notes with heart.

During the final concert, just as they had been blind to the appeal of Flickerstick every step of the way, the members of Soulcracker didn’t understand what was happening. Not an “I can’t believe this is happening” shock to the system, but a complete lack of awareness as to what was occurring.

Except that’s not what was happening. The crowd was actually being pulled into Flickerstick’s world. The audience wasn’t bored, it was enthralled.

Flickerstick went into the show expecting a hostile audience. Sure, after their first song, a few plants actively yelled out for Soulcracker. But the thing is, even after one song, you could tell that those shouting were mere droplets in the sea of people. Flickerstick was winning people over. The cameras showed men bobbing their heads and rocking along with the band, and women with entranced eyes swooning.

The longer Flickerstick played, the stronger the connection between artist and audience got.

And yet, Soulcracker remained oblivious. During Flickerstick’s final song, Soulcracker’s guitarist was caught on tape saying, “Well this is an audience killer if I’ve ever heard one.” In response, the backup singer stated, “If they go over forty minutes and people leave because of it, their vote better count.”

Except people weren’t leaving. The audience was in the palm of Flickerstick’s hand, and the members of Soulcracker couldn’t read the room enough to grasp that. How surprised they must have been when the song ended and the audience roared in approval.

I’m not sure how to phrase this next observation, and maybe it’s nothing… or maybe it’s everything.

When Flickerstick played, each member of the band had their eyes closed. They were in the moment, feeling the music. Everything they were doing was internal, and as a whole they were able to project their emotions in a way that made them more available to the audience.

Conversely, when Soulcracker was on stage, they watched the audience without actually seeing the people. Soulcracker actively searched for recognition. They were taking, while Flickerstick was giving. An important distinction when it comes to music.

The eyes closed/eyes open difference was so subtle I didn’t even notice it right away. But once I did, the distinction stood out. Eyes-closed Flickerstick reflected their passion in their body language; their own personal interpretations of their music. Eyes-open Soulcracker was about ego; “Hey, are you digging us? We’re so cool!”

Which leads me to my final observation.

By all means, Soulcracker had a good set that night. So much so, after it was over, their lead guitarist said, “I’m so happy. I feel really… acknowledged. Finally.” Which is fine. He was on stage, the audience cheered, and he felt rewarded for his efforts. Nothing wrong with that.

Until you compare it to what one of Flickerstick’s guitarists said after their performance.

An emotional wreck, he said, “We gave it everything we could. I can’t do any more than that.”

Compare those two statements. One is about taking, the other is about giving. Flickerstick gave to the audience, because art is about giving. I have this music inside me, and I want to give it to you.

That’s a much more powerful sentiment than, “Thank you for applauding for me. I accept your adulation.”

Flickerstick won the battle, and the competition. When their set finished, the audience erupted, chanting their name.

If you’re still reading, you might be wondering: “If they were so good, what happened to Flickerstick? Why didn’t they make it big?”

First: life. Life happened. Original members got kicked out or left for various reasons, and that’s tough for any band to survive. It’s unfortunate, but just missing the golden ring happens more often than grabbing it.

Second: art has never been, and will sadly never will be, a meritocracy.

Flickerstick got sucked into an industry that has more expectations than original ideas. Record labels don’t set trends, they chase them. If you’re Harry Doyle’s “Just a bit outside” current popular tastes, most record labels won’t invest in you.

It’s not fair, but that’s how life works.

If you want to watch the series, garbage-quality, VHS-to-digital versions are available on YouTube. Why VH1 doesn’t make every episode available on their website is beyond me.

The show wasn’t a hit.

That’s why it’s hard to find.