I Owe it All to You, Sue 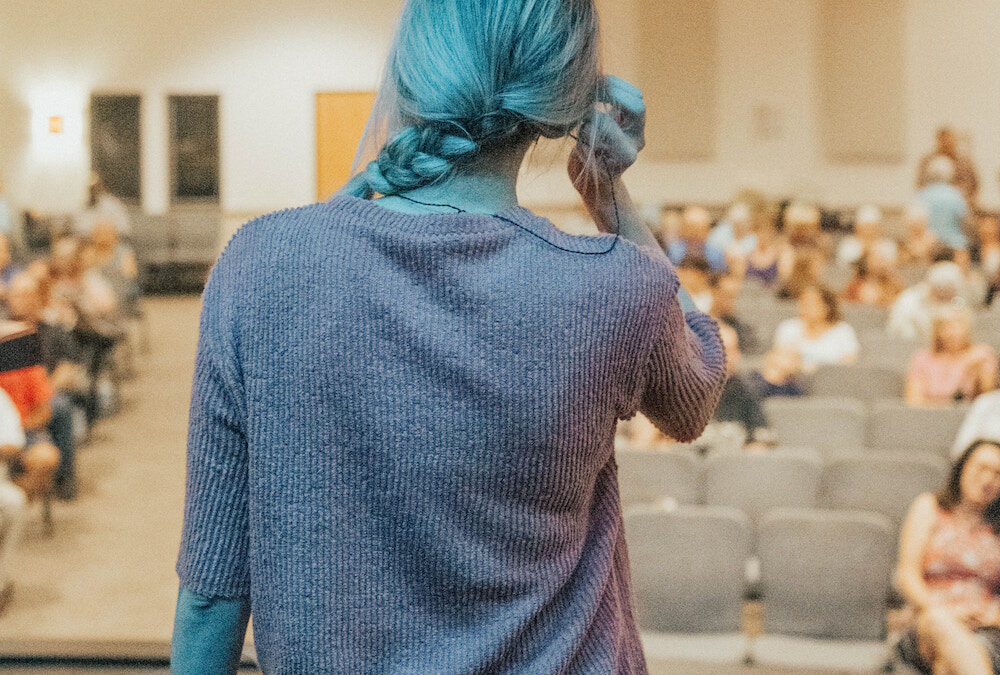 “According to most studies, people’s number one fear is public speaking. Number two is death. This means to the average person, if you go to a funeral, you’re better off in the casket than doing the eulogy.”

Though my path to being a stand-up comedian is well documented–moved a lot, lost friends, used humor as a weapon or shield (depending on the situation) against feeling actual human emotions–my wife recently asked if I ever had to get over a fear of public speaking.

It’s a good question, and I know more comedians than less that had to overcome such a phobia.

In fact, I can actually pinpoint the moment I realized I had no fear of being in front of others.

Don’t worry, this isn’t a life-affirming tale of a teacher that brought out the best in me; there was no John Keating who inspired me to reach for the stars. I can’t even remember my speech teacher’s name. I remember being annoyed with her because of one of her notes–more on that later–but I can’t remember her name and couldn’t give you a physical description of her if my life depended on it.

No, I owe this particular revelation to an old classmate of mine: Susan Anderson.

Sue was an interesting person in high school. She was pretty and popular. Part of the “in” crowd. I was a dirt ball. I wore torn jeans (on purpose, because “cool”) and heavy metal t-shirts.

Basically, Sue and I didn’t exist in similar social circles.

So when I say she was “interesting,” I mean she didn’t wear “pretty and popular” on her sleeve. Sue was a nice person. She’d smile and say “hi” to you in the hallway if you accidentally made eye contact, where her peers might snicker or look away. Sue was Claire Standish, only without the airs or attitude.

I write all this to explain my bewilderment during the first presentation in speech class.

Our teacher, someone who should have understood that public speaking is something few people enjoy, didn’t level the playing field like she could have. There was no drawing straws to see who spoke first; no lottery system to make everything random.

No, for the very first speech at the beginning of the semester, things went alphabetically. This meant if your last name began with an “A,” you were at the front of the line.

So, an involuntary sacrificial lamb, Sue got to stand before her peers before anyone else. Her speech was, and I say this with empathy and kindness, a disaster. She turned red, possibly broke out in a hive or two, shook, stammered, and stared at the words on her paper the whole time.

I don’t remember if she was able to even finish her presentation.

During her time behind the podium, I was dumbfounded, and my mind set to racing in confusion.

All I could think was: Sue, everyone in here likes you. You’re popular. People are going to pay attention to what you have to say. You talk to every one of these knuckleheads face-to-face every day. What’s so different about talking while you’re standing, and we’re all sitting at our desks?

I remember looking around the room and having the twin thoughts: Everyone is uncomfortable, and I’m not afraid of these fucks.

(I mean “fucks” in the most endearing of ways, promise.)

Thus, when it was my turn, that’s exactly what I did. I stood, and talked.

I’m not going to lie and say my speech was awesome, and that everyone cheered, and everyone high-fived me and threw me into a chair, hoisted me over their heads and carried me around the room in celebration. For all I know my speech sucked donkey balls.

But I wasn’t afraid to give it.

I wasn’t confident, I wasn’t cocky… I was apathetic. It just didn’t matter to me, and that’s something I was able to carry with me to my very first time on stage.

In fact, two months into my career, when I was doing guest spots and open microphones wherever I could, a comedian named Mark Schneider asked me, “How long have you been doing this?”

When I gave him my sixty-day answer, he was stunned.

“Jesus,” he said. “I’ve been doing this four years, and you look more comfortable up there than I do.”

(Again, my material probably blew goats, but I was delivering it quite carefree.)

If anything, I attribute my attitude to Hamlet. To be or not to be? Just be. Don’t go to extremes; don’t be scared or overconfident. Just be.

So, if I was comfortable giving speeches, what was my grievance against my speech teacher?

(This is the “later” I promised I’d return to earlier. See? I didn’t forget.)

One of our themed speeches was “Work of Fiction.” We had to do a reading of something we liked. A book, a poem, a screenplay… Something we didn’t write, but that we would interpret for the class.

I chose to recite a section of “The Mangler,” by Stephen King.

It’s a short story of his about, no lie, an industrial laundry press possessed by a demon.

At first, all the victims are those who stood too close to the machine. At the end of the story, however, the machine breaks free from its moorings and makes its way into the city where it will be able to kill whoever it wants.

Yeah, I know it sounds corny now, but when you’re young… OK, even when you’re young a laundry press shouldn’t be frightening. But Stephen King is a damn fine writer, and if anyone could make doing the laundry tense, he can.

I chose to read the final few paragraphs of the story, and I practiced them so often I had them near-memorized.

A lead character realizes the machine is on the loose because he hears it coming. In the book, he looks out the open window and into the distance. The sound of the laundry press is continually growing louder as it gets closer.

…and got docked points for breaking eye-contact with the class.

Yeah, well, I was being dramatic.

Poorly. I was acting poorly, but Goddammit, I shouldn’t have gotten docked points for a physical representation of what I was saying.

So, f-you, old speech teacher of mine. You didn’t have the wherewithal to make us draw straws for the first speech, and you docked me points for looking out a window.

Anyway, it’s not that I’m a comedian because of Susan Anderson, so you can’t blame her for that.

But watching her allowed me to advance faster than I ever could have, so…

Wanna see me strut my stuff on stage? I’ve a whole slew of YouTube videos for you to devour.

Interested in more thoughts on comedy? Give a read.