It’s Never Been So Bad As It Always Is 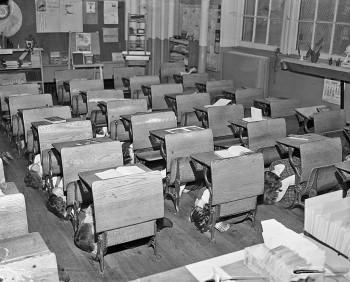 Yesterday, I read an article about children practicing exiting their school.

It wasn’t a fire drill, this was to prepare for a school shooter roaming their hallways; the children were being trained to climb out windows and run.

At first I thought, “How sad, that we have to prepare kids to live in such a world.” Many people commenting on the article felt the same.

But then I remembered my own childhood, and all I lived through. 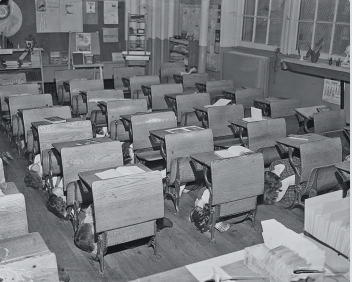 When I was young, students practiced “Duck and Cover,” the act of getting under our desks in case of a nuclear war with Russia.

My entire class was fingerprinted, because the Atlanta Child Murders were scaring the collective crap out of America.

38 million people watched the movie Adam, and America’s Most Wanted was born from the aftermath of the horrific event of child abduction that inspired said movie.

Hospitals volunteered to x-ray Halloween candy, because the idea a razor blade could be inside an apple sent the country into such a tailspin that for a good many years trick-or-treating took place in daylight hours.

I realized that while times change, raising children to live with fear has always been the norm.

Before my generation, it was The Red Menace, and before that polio. And so on back through time. Life has always been about fear, it’s just that adults tend to forget what we went through and want to protect the current generation from what they’re experiencing.

The reality is: the children of today will survive the pressures of fear just as my generation did, just as every generation has.

Not that fear isn’t real.

I’m writing this at 2 AM because irrational fear shot me awake. I was lying in bed, somewhere between sleep and wakefulness, when bam! There it was. The most evil thought possible, making my stomach churn.

What if something happened to my children?

Thankfully, the evil thoughts are rare.

Like most people, 99% of the time I’m aware the world is by-and-large is inhabited by good folks.

But when malevolent thoughts pop in uninvited, they can be crippling.

The important thing, I believe, is my guidance as a parent. If I lament the teachings of safety and instill worry into my children, they will grow up flinching at shadows. If I am straightforward, and treat preparing for danger as a simple fact of life, they will do the like. They will understand that as a whole, the planet is a good place, but that you do have to keep your eyes open and radar up.

Such, as they say, is life.