A Love Letter to my Lydia 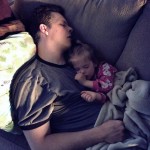 One of the best things any form of art—painting, literature, music—can do, is move us emotionally.

But does that mean it changes us?

I remember my days of teen angst and really enjoying Salinger’s defining novel, The Catcher in the Rye. The book no longer speaks to me the way it once did, but certain scenes still remain in the cobwebbed corners of my mind. Case in point: the movie theater moment, where Holden is killing time before catching a drink with Carl Luce.

As it is written, there is a woman in the theater with her child. She is alternately crying—because she is so touched by the movie—and berating her child for being restless and having to go to the bathroom. In other words, she is scolding her child for being a child. The disparity being described is that of a person who probably believes she is “deep” and “kindhearted,” because art moves her, yet in reality is a bit of a monster who is neglectful to the needs of her own son.

I wonder if we all don’t have a little of that woman in us. We all see things that inspire us to be better than we are, art that tells us we can carry that emotion with us after we leave the theater or close the book, but how often do we actually live up to the ideals we set for ourselves? We watch something that moves us, then roll up our window on the way home when we pull up to a homeless person with a “Hungry” sign at a red light.

The difference between who we think we are—caring, loving, connected—and who we really are—emotionless, cold, indifferent—has me thinking about my wife, Lydia. People always joke about their marriages—“I married up!”—but when I say I married my better, I mean it.

My Lydia continually proves herself to be a genuinely good person.

A few years ago, we moved into our current house. The subdivision we live in has only one entrance, and to get to it we generally have to go through a four-way stop in our town. There is a modest, one-car-garage house at the four-way stop, and we soon discovered that in every-season-but-winter, there was usually an elderly gentleman sitting on its front porch wearing cowboy attire. It didn’t matter if it was sixty or ninety degrees, he’d always have on the same flannel shirt, and deep-blue blue jeans. And naturally, a cowboy hat perched atop his head of grey hair. The faded-name “Carter” barely survives on the weathered mailbox in front of the dwelling.

For the past several years, Lydia has waved every time she saw him sitting outside. Sometimes Mr. Carter would wave back; sometimes he wouldn’t see her.

After a few months of this interaction, Lydia’s wave turned to interest.

“I want to talk to him,” she started telling me. “I don’t know why, but I just feel the urge to go say hi.”

When spring 2012 hit, Lydia started taking our doggy, Kitty, on a 2-mile walk, one that looped right past Mr. Carter’s house. She still waved as she passed Mr. Carter, but it felt different. Waving from a car was one thing; being on foot and only a few yards from him made her desire to actually speak to him burn a hole in her.

So, several weeks ago, she finally mustered up the courage to walk right up and introduce herself. Turns out, Mr. Carter is a 92-year-old widower, and a combination of friendly, happy, and maybe most important to the tale, lonely.

He misses his wife, hasn’t really gotten used to sleeping alone, and smiles a wide, semi-toothless smile whenever someone takes the time to visit with him. Mr. Carter has kids, grandkids, and even great grandkids, but many live in other cities throughout the state and country.

Every time Lydia stops to chat, he leaves her with the same smile he used to greet her, only with the added words: “You stop by anytime now; and tell that fella of yours he’s always welcome to say hello, too!”

Maybe it is because she is a woman, maybe it is because she is starting to experience maternal instinct, our ever-growing baby expanding her belly and spreading hormones soaked in love throughout her, but in a very short period of time Lydia has grown to care for Mr. Carter. To her, the idea anyone is lonely is painful to imagine. Because of this, when Lydia goes out of town, there is a new addition on my “Honey Do” list:

Many moons ago, I wrote a blog where I quoted the movie As Good As it Gets, regarding what I was looking for in a partner: “You make me want to be a better man.” I know two things:  One, I absolutely found that in my Lydia. Two, I may not be too great right now,  “But I’m trying, Ringo. I’m trying real hard to be the shepherd.”

Because I want to improve as a person, I did visit Mr. Carter while Lydia was away, and I have to admit it was a good little moment. He sees a lot from his porch, and notes, “Not everyone stops at those stop signs like they’re supposed to… but motorcycles, they do. They stop every time. They know they gotta…”

(Because when it comes to motorcycle vs. car, truck, or bigger, motorcycle loses. The only fistfight they win involves one with a bicycle)

Mr. Carter’s favorite story involves a random moment that took him by pleasant surprise: “One day, I was just sittin’ here, not really paying attention to anything, when I heard a woman yell, ‘What do you think of these?’ I looked up, and there’s a truck, and this girl leaning out, her shirt pulled all up! Her titties were right there, barefoot! Well, they drove off before I could yell back, ‘Come a little closer so I can get a better look, then I’ll tell you what I think!”

Mr. Carter laughs every time he regales a listener with that tale.

Change your life to match what you see and desire.

And if you know someone in your neighborhood that you’ve always wanted to say “Hi” to, get off your duff and do it.

You might be old and lonely someday, too, fucker.