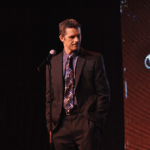 I respond in the affirmative, and the man eyeing me pauses.

“My mouth has been where your dick was.”

I’ve been blessed with a fairly decent Poker Face, so if my eyes betrayed either surprise or shock at this introduction, I am unaware. My face remained placid, that much I know, because maintaining a neutral expression is a skill I possess.

I do have to admit to having arched a mental eyebrow at the statement; no one has ever given me such a greeting, so it did catch me unprepared.

The other comedian and I apparently shared a common woman in our past: Karen. I dated her for a year; he fucked her for a weekend. For some reason, my name came up repeatedly during his three days with her, and for years he wondered who I was. I would say I was flattered, but if anything I was curious; why had I been the focus of their attention?

Finding out your ex has gone slumming can arouse one of two emotions in you: gratitude, or abject misery. Appreciation happens when you realize you didn’t get burdened by someone that would have dragged you down; depression occurs if you wonder why you weren’t good enough for them when someone obviously lower on the evolutionary totem pole was.

Yes, that reads as very judgmental, but I’ve felt both ends of that emotional spectrum and can hopefully explain where I’m coming from.

On the melancholy side of things: My first real, long-term relationship was with a woman named Judy. She was deeply in love with a man who cheated on and hit her. I always wondered why she kept him in her heart after I had offered her mine; low self-esteem kept me tethered long after I should have cut all binding ties and run.

Regarding the joy of having escaped: upon first hearing the other comic had hooked up with Karen, I didn’t feel any single way about it. Karen was far less substantial a relationship than Judy, and so far in my rearview she only remained as a single wisp of memory. She had, however, dumped me, which at the time hurt. Rejection always stings, and anyone saying otherwise is going to Pinocchio their way to an elongated nose. So, it was with a sly smile I spent a weekend with the man who tasted Karen after I.

Apparently he cheated on his first wife with my ex, and before our weekend together was finished he would cheat on his current fiancée with an employee of the club. He had an addiction problem—prescription pill bottles littered his hotel room, making it look like Heath Ledger’s last stand—and his nights were a blur of alcoholic imbibing. For someone in their early twenties, this could almost be forgiven as “normal,” but for a man on the dawn of forty it seemed a bit immature.

I examined him as a scientist might a specimen, wondering what kind of transition my ex had to go through to shift gears from me—someone honest and monogamous—to a walking mess of a man who was desperate to convince the world he wasn’t going bald.

It was an informative few days for me; I learned my ex had an out-of-wedlock child, but whether or not she was still with the father I did not discover. I was shown pictures, however, that had her looking at least fifteen years above her given age. Time was a robe she did not wear well.

I’m not overly proud of it, but all these after-the-fact events did give me an ego-swell. As arrogant as it is, there is little in life more satisfying than looking at someone who dumped you and thinking, “And how’s that working out for you?” My wife told me Googling ex-boyfriends is a game she plays every so often when feeling down. “This one has a criminal record, this one has three kids and got fat, this one is divorced…” She often giggles when making note of the disasters she avoided.

A point I am encircling without making is: there is a great myth Hollywood sells called, “The One That Got Away,” also known as, “First Love Is True Love.” The idea is: we meet our soul mate early on in life, and then should do everything humanly possible to make that relationship work. With the advent of the Internet came a term for looking up an old flame and attempting to re-create that spark: “retromance.”

Fortunately, I’ve never lived by any bumper-sticker philosophy the silver screen has thrown my way; I feel the opposite about pining for the past. In fact, I believe it was my series of botched relationships that allowed me to become the husband I am today. Had I been trapped in any one of my aborted unions it would have eventually ended in disaster, or ennui.

Because of that, I see “failed” relationships as building blocks or dodged bullets; they are steps to be taken as you progress and grow as a person. The only question is: will you grow? All too often we take opportunities to pause in self-reflection and use them in finger-pointing ways. Instead of examining what could be done better next time around, we double down on personality problems and poor decisions that got us in trouble in the first place.

Case in point: I have an acquaintance, someone I fully admit I do not know very well. I met this person right after they had been dumped, when they were emotionally raw, and very giving and open. The person was in tune with others, and sympathetic to problems. I wondered, “Who would leave such a kind soul?” Over the past few months, however, I have watched as this person swung the pendulum from giving to vindictive, petty, and obnoxious; at one point, they even boasted of being vengeful. Finding myself less and less interested in spending time around them, I wondered, “If this is the true nature of that person, do they want to repeat the patterns that pushed the partner they loved away?”

When I think about the person I was as a teenager, and then as a young man in my twenties, there is no way I’d want regress to that existence again. If I had held on to that mindset or those attitudes… God, I’d be an angry, lonely old man right now. Back then I had a fetish for emotionally immature women. Because of a rescue complex I had, I thought I could save fair maidens from whatever silliness they were putting themselves through (e.g. Judy’s abusive boyfriend, or Karen’s limited imagination). It was only when I decided to find someone who had moved past inexperience and was wise on her own terms that I realized unions are partnerships of equality, not a student/teacher relationship.

The point is, every misstep I took led me to the place I am today. There are those that say, “If I could go back and change one thing in my life…” but I harbor no such fantasies. To change one thing would be to change my entire timeline, and then who knows where I’d be now?

In the end, we can allow ourselves moments of pride, but what purpose does it serve? As silly a cliché as it is, we all walk our own paths in life, and on occasion they intertwine with that of another. To say you escaped the unhealthy bond of a poor relationship is neglecting to remember that the other person escaped you, too. I’m sure that whatever Judy is doing these days, it’s exactly where she set out to be. But if I were ever to discover that her path had her land in a place where she was divorced, with a couple kids and an ex that refused to pay child support?

And think, “How’s that working out for you?”