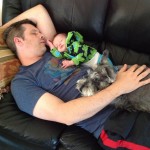 I was never a fan of Brett Favre.

I worked in the restaurant industry, in Milwaukee, Wisconsin, during his ascension with the Green Bay Packers. Because of this, I was “lucky” enough to hear all the stories of his (alleged) drug use and constant womanizing before they made their way to the general public.

Not that there’s anything wrong with either vice, but the philandering left me a little cold. Brett was in a long-term relationship, then engaged, and then married. All the while he was publicly monogamous, you’d hear from waitresses in his steakhouse about his behavior.

(You’ll note, that after the 2010 scandal where he (again, allegedly) texted graphic shots of his genitalia to a woman, no reporter seemed surprised. His actions may not have been public knowledge, but they were well known in certain circles.)

But I could have forgiven him all that, if not for one thing.

The Green Bay Packers won the 1996 Super Bowl, and back then every Super Bowl winning quarterback appeared on The Late Show with David Letterman. In a pre-show interview, Brett quipped something terse along the lines of, “I’m not going to let Dave pull anything on me.”

Brett let it be known his guard would be up for Letterman, and he lived up to that promise by giving a dull, listless interview.

Several months (or years, I forget which) later, Favre went on The Tonight Show with Jay Leno. During that interview Brett was relaxed, happy, smiling…

…and like that, I knew why I never embraced him.

Favre was a Leno guy.

It’s one of those odd, defining things in life. The Beatles or The Rolling Stones. Cory Haim or Corey Feldman.

And of course: Leno, or Letterman.

I was a Letterman guy since episode one on NBC. Bill Murray was the main guest, and if there’s one thing I’ve loved ever since SNL, it’s Bill Murray.

Turning on the TV at 11:30pm became a regular occurrence for me.

In the days before DVR and TiVo—and with the programmable VCR being slipshod at best—going to school exhausted (or sleeping until noon in summer) was the only way to get my nightly fix. During the school year, it was worth the sleep deprivation. In summer, it was worth missing the sunrise.

David Letterman was doing things any teen would find compelling, and only years later would I read that he was given a show specifically to target “young males.” The network suits may have been after the expendable income of my demographic, but Dave was simply relating to us. He did so by being hilariously immature, whether it was by throwing a flaming bag of flour off a 5-story building, smooshing hot dogs in a hydraulic press, or running items over with a steamroller. Dave would put on a Velcro suit and bounce off a trampoline, sticking himself to a Velcro wall. He’d yell out a window—using a bullhorn—at the Today show, which was taping live on the street below. It was incredible.

Dave was ahead of his time.

Yes, that phrase is used too often when showering praise upon someone, but it’s true. Before YouTube and the ability to be uselessly famous, Dave had both Stupid Pet Tricks and Stupid Human Tricks. Could you shoot milk out of your eye? Did you own two dachshunds that could run their impossibly tiny legs on a treadmill? Dave wanted you on the show.

(He also, and you didn’t have to watch closely to catch this, often enjoyed interacting with the people in these segments more than he did the pampered millionaires promoting their mediocre films.)

Dave was also the first entertainer to shatter my innocent naïveté regarding the way show business works.

A few years deep into existence, Late Night with David Letterman aired what was to become one of the few bits to carry from NBC to CBS: Dave’s signature Top Ten List. What perked my ears upon hearing it’s announcement was not the Top Ten List itself, but the prelude sentence; “And now, from our home office in Milwaukee, Wisconsin…”

Not knowing any better, when Dave spoke those words, I believed him. I believed there was a staff of writers in a city I had once lived in, and that was still a mere 30 miles from where I lived at the time. The thought of these people, these writers, so close to me, creating hilarious lists weekly… I wanted to meet them. New York might as well have been on the other side of the world. But Milwaukee? That was quick drive; you could go and return home within an afternoon.

It was a dream of mine to look up the Late Night Home Office and visit. Maybe take a tour, in the same way people tour Universal Studios or meander their way through a zoo.  I just wanted to go see where the magic happened.

Then, without warning, one day Dave spoke ominous words: “And now, from our home office in Omaha…”

I was shocked; what happened to Milwaukee? What caused the move? I had never made my way to the “home office,” and now it seemed I never would. For all I knew, Omaha was as far away as Oregon.

Eventually, I learned Dave was simply being a goof, and that neither Milwaukee nor Omaha ever contained a home office. Picking a random Midwestern city and declaring it the base of operations was just part of Dave’s character. Something he would find amusing, even if no one else did.

Which was a huge part of his charm: the quirks.

Dave was a rare brand of performer, someone who didn’t pander, but instead did things he found amusing. His belief was: if you put honesty behind your art, people will be interested.

The problem with America—or maybe most people in the world—is that if given the option of being challenged, or catered to, the majority will choose “catered to.”

People don’t always appreciate unique, original, or even enlightening. America likes safe, vanilla, and easy-to-understand. When Leno took over The Tonight Show, there was a short period where Letterman bested him in the ratings, but soon simple overtook challenging, just like it always does. For most of the Letterman/Leno run, Leno won in the ratings.

Which isn’t always a bad thing. Coltrane is a legend, Kenny G. a punchline; the same is true of Letterman vs. Leno. Letterman is widely respected. Leno, not so much.

As he aged and matured, Dave entered a new role: the elder statesman. He turned intelligently political, adding gravity to his interviews with those able to rise to the challenge. Sure, he could still goof around with a movie star, but throw a senator or newsman in the guest chair and Dave spoke from a depth of knowledge unparalleled by your average citizen.

After 9/11, every TV show host gave a return-to-air speech. None were as powerful as Dave’s. Though every speech was sincere, and many had emotion behind them, only Dave’s carried weight. True weight.

Without meaning to, he became Generation X’s Johnny Carson. The Frank Sinatra of the talk show world. Keith Olbermann compared him honorably to Babe Ruth.

Dave deserved all of those comparisons, but above and beyond, he was David Letterman. Unique, original, and at times enlightening.

Brett Favre appeared on The Late Show again many years later, in 2008.

This time he was more relaxed, because he had an agenda. Brett was on his “Twin Middle Fingers to Ted Thompson” tour, playing to nothing but his ego and ignoring 16-years of dedication by Green Bay fans.

He was still selling his “Aw, shucks, I’m just a country boy” persona the best he could, but I wasn’t buying it. I still looked at him as the philandering, nudity-texting, “Dig me” guy that always seemed to exist just under the surface.

Dave retired from late night television with more grace and power than Brett Favre—or Jay Leno, for that matter—attempted to.

The world is a better place with him back. Even if he’s on Netflix monthly, not late at night, daily.