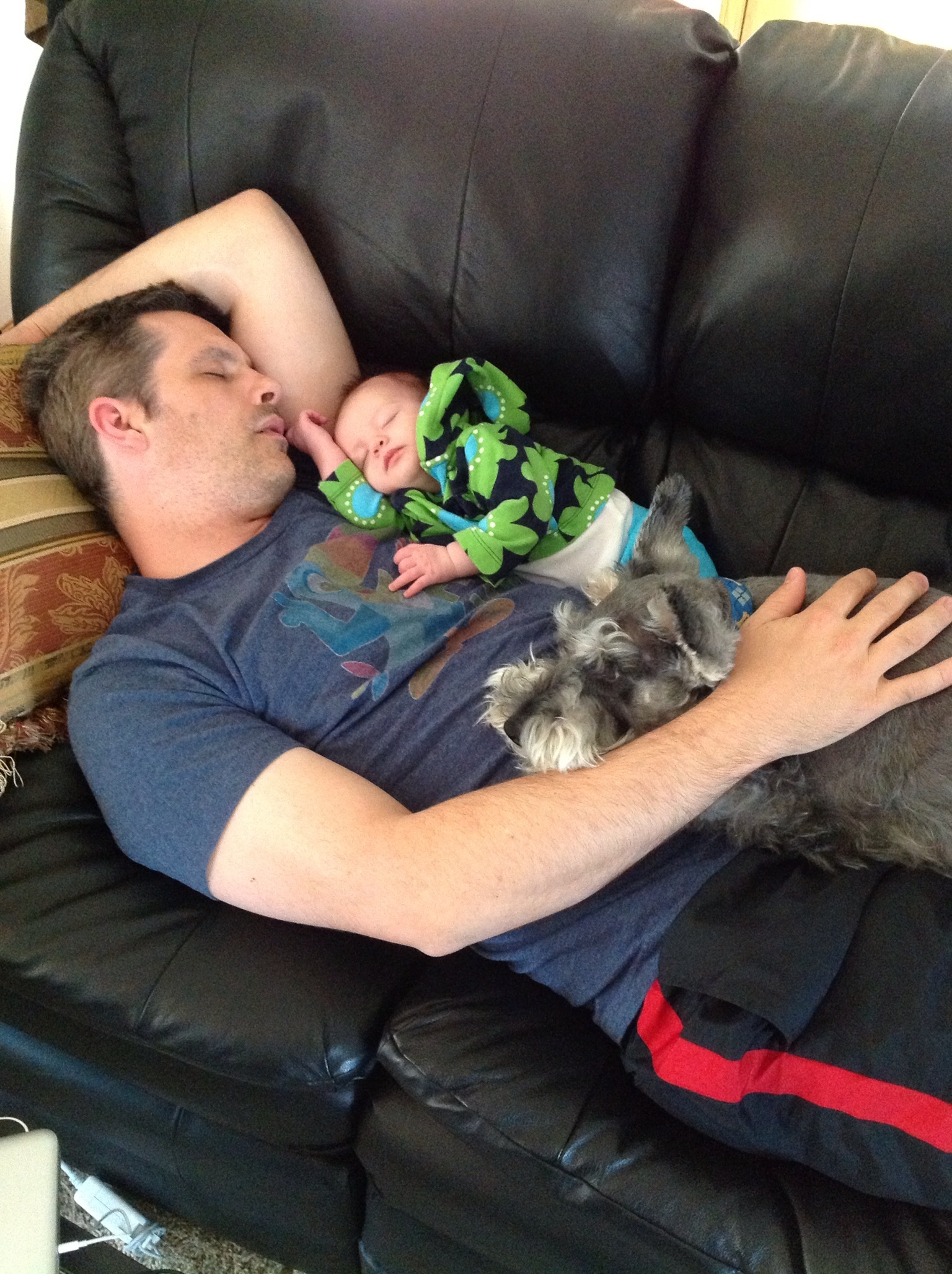 September 16, 2013, was a milestone for Hillary Fine Timmel.

That morning was the first time she ever woke up with neither her mother nor her father in the house she knew as home.

I had been in Chattanooga the night before and was doing my best to return to her side. Driving all night, I would achieve my goal slightly after 8am. Lydia was flying back from New York, a destination she had left for early Sunday morning.

With both parents working, “Grandparents to the rescue!” was the battle cry that sounded forth. Lydia’s mother arrived on Saturday and watched over Hilly during the daylight hours Sunday; my mom and fake dad had the scourge of bedtime to deal with.

Everyone says Hilly was fine while the sun was shining; the problems started come evening. Hilly went down for bed mostly OK, but slept very fitfully, waking numerous times beginning around 3am.

When she finally awoke for good, Hilly was sad. Not “howling her howl of disapproval sad,” something that alerts the entire neighborhood she’s truly upset, this was more a “confused sad.” It consisted of whimpering and silent crying, with tears running down her face yet lacking their usual vocal accompaniment.

I walked in the door that morning to hear my mother exclaim, “Look who’s home!” The words were pronounced in the most upbeat manner possible, as mom was trying to excite my daughter out of her sorrow. In the living room, fake-dad was doing his best to comfort Hilly, but his efforts were being met with resistance. Hilly was tolerating but not appreciating her babysitters.  When I entered her eyesight, she near-lunged out of his arms for me. I reached back, and Hilly took hold of me as if I were the final lifeboat off the Titanic.

If I have been away for several days, upon my return Kitty, our mini-Schnauzer, is so excited to see me he begins crying. He cannot get close enough to me in those moments, trying ever-harder to press his body against mine, as if he is trying to meld our two physical beings, that we never part ways again. That is what Hilly attempted when I took hold of her that Monday morning; she not only wanted to be held by me, she wanted to be absorbed into me. She put her head into my shoulder and collapsed into me, her body letting lose all the tension that had been building in her from the night before. Immediately her tears stopped.

I told my mother I needed to relieve myself—long drive and all—and wondered if she could hold Hilly for just one more quick second.

That was not to be.

My mother held out her arms and smiled, “Want to come to grandma?” but Hilly enacted what Lydia and I call her “Death Grip.” If we try and put her down when she wants to be held, her little legs lock tightly around our waist and her fingers claw into our flesh, signifying a battle is about to take place. Now, with me home, she had her walking and talking security blanket in a deep embrace. The fuck if she was giving up such valuable real estate for grandma.

I ended up holding Hilly with one hand while steadying my stream with the other.

After that, having driven all night and having been awake roughly 25 hours solid, I needed a nap. Considering Hilly had slept poorly and was refusing to leave my side, I figured co-sleeping was in order.

We lay down on the Master Bed and within seconds Hilly was laughing. Laughing and smiling. Her bad mood ended, she was her usual festive self.

Hilly began standing and plopping down on me, an action repeated a half dozen times through a flurry of giggles. So happy was she to have her favorite toy once again; dad accepts all abuse with a resigned smile, because that’s what a parent does.

After a generous series of love-flops performed upon my battered body, Hilly looked lovingly into my eyes, popped a thumb into her mouth, and proceeded to roll into the crook of my arm and fall sound asleep instantly. Hilly was zonked before I had a chance to expire my own eyes; it was if she had been waiting for the opportunity to sleep without worry.

As I was still (somewhat) awake, I stared at her a bit, and wondered what it must have been like for her to not know where her mom and dad were. At 13-months old, Hilly hasn’t found her words yet, and she doesn’t understand ours fully. Yes, she knows simple commands—“Arms up!” works fantastically when trying to dress her, and she turns when called; Hilly knows her name—but the complexities of language escape her. This means as many times as Lydia told her (through kisses of sorrow), “I’m only going away overnight; I’ll be back tomorrow, and so will daddy,” no actual content got through. All Hilly knew was: “Mom and dad are gone, and people I’m only sort of familiar with are in the house.”

Thus, when bedtime came on Sunday night, and neither mom nor dad tucked her in, a mild form of anxious “trauma” set in. It kept her fitful and restless, awaking constantly and needing constant reassurance all was well—my mother said Hilly would sleep if a hand was rested upon her, but the instant that hand was removed the fussing would return.

Children forget all, so in the morning, though she would never use such a detailed analysis in her brain, the thought “Mom and dad being gone was probably just a bad dream; it’s a new day!” was probably running through her brain.

But once again, instead of us, the semi-familiar strangers were there.

What happened next? Did a small form of panic set in? Did she wonder if she would ever see us again?

The reason these questions pounded inside my brain is while I knew my wife and I had only been away one night, it made me wonder what became of children involved in custody battles, or those who lost their parents for other tragic reasons? When all you know or understand is the love of two people and suddenly they go missing from your life, what kind of permanent damage does that do to a child?

As I looked at my own one-year-old daughter sleep next to me—someone already so attached to her parents that a single night away upset her deeply—I wondered what it must have been like for poor Veronica.

Two years deep into being loved by one set of parents, suddenly the courts decided biological dad had a shot and took her away. The very foundation of her existence was cracked irreparably. Again, it can be explained to a child what is happening, but they haven’t yet obtained the proper tools to appreciate logic. All a child wants is love. Consistent love.

The courts finally did the right thing and returned Veronica to her parents, but the father that didn’t want her originally has vowed to appeal. Because what is a child if not a pawn to appease the ego?

I don’t know how long it will take Veronica to bounce back from this, but children are resilient beyond words. My hope is that she will know that no matter what happens to her, there is a family that loves her.

Thoughts of Veronica swirling through my mind, I eventually nodded off and slept peacefully. Because of her disrupted night, my mother also decided to nap, while fake dad wandered off on a shopping run. This meant Lydia arrived home to a quiet house. Investigating the silence, Lydia made her way back to our room and gingerly opened the door, waking me in the process. 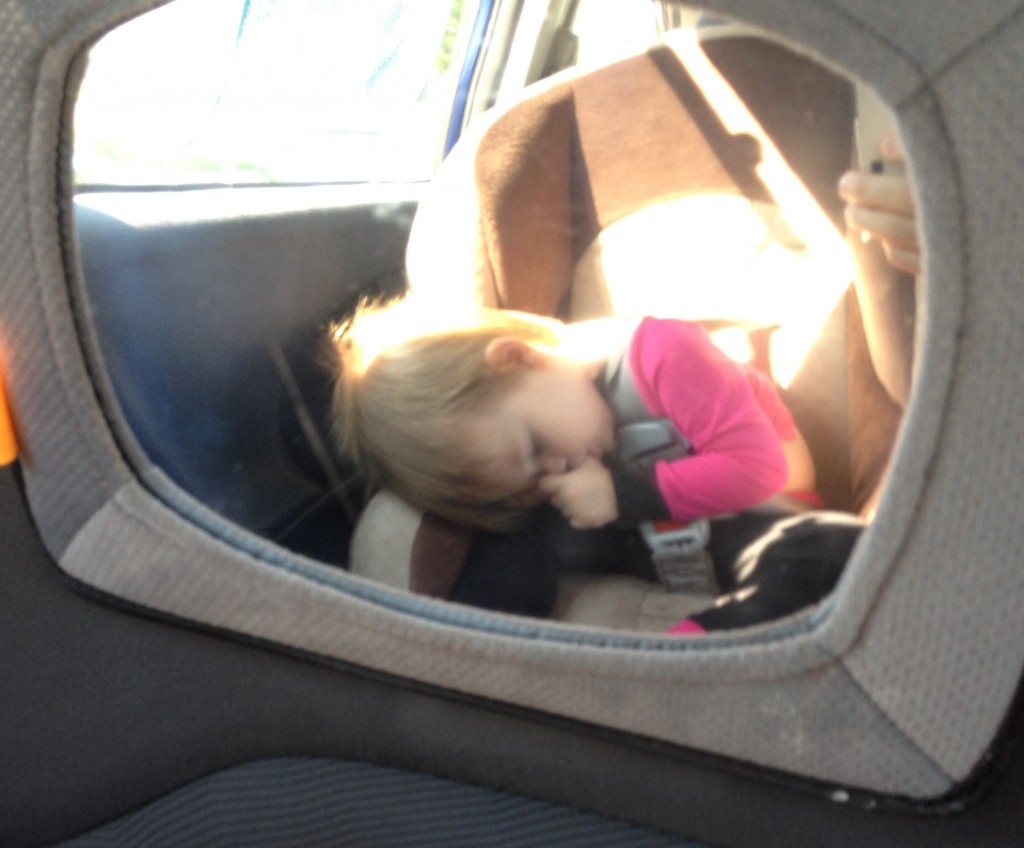 Seeing Hilly sound asleep, still napping in the crook of her father’s arm, Lydia smiled and motioned that she would back away. If there is one thing you never want to do in life, it’s to wake a sleeping infant.

Unfortunately, the return of mommy was too much for Kitty, who was as excited as all get out to have both mom and dad back under the same roof. He bounded up onto the bed, excitedly pouncing on me as if to say, “Look who’s home! Look who’s home!”

Naturally, this woke Hilly quite abruptly. Waking a baby from her slumber is usually an invitation to disaster, but not this time.

This time Hilly awoke to find not only was daddy still there, but now mommy was in the room, too!

The bliss that began radiating from her was palpable.

Her two favorite people, right there in front of her again.