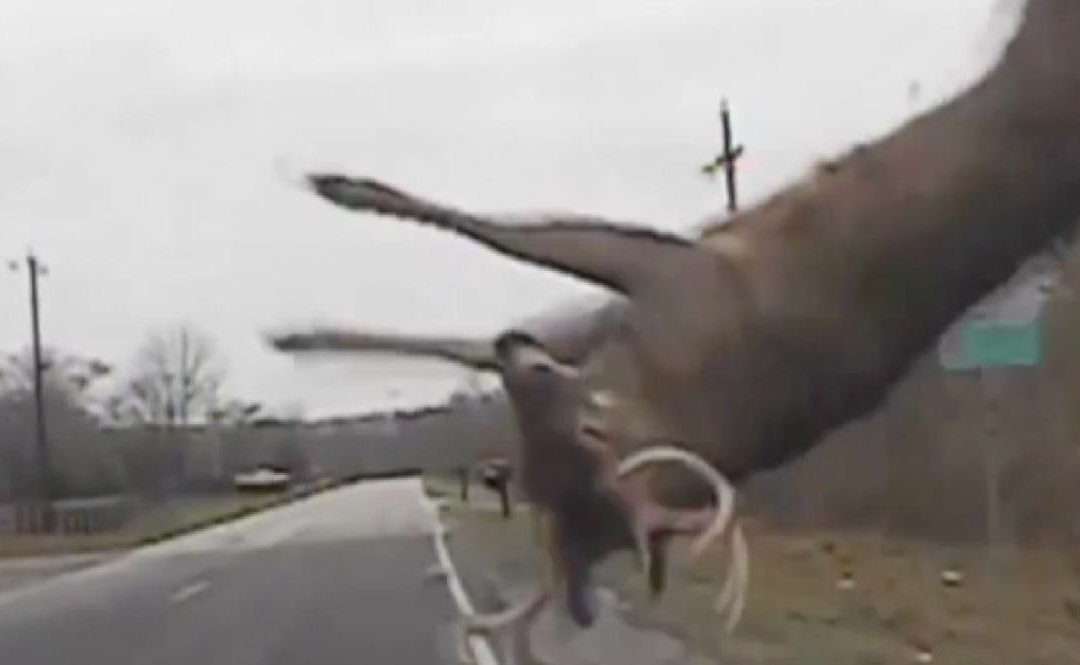 The exploding turkey should have been an omen.

I was driving on a two-lane highway in nowhere Iowa, headed to a gig in Wisconsin. It was about 3pm, and a pickup truck was about 25 yards in front of me.

Thinking it could outrun the truck, a turkey with poor judgment decided to skedaddle itself across the road. The turkey started it’s less-than-graceful run ahead of the truck, and then, realizing it wasn’t going to make it, flapped its wings as futilely as a turkey can. Despite its best efforts, the turkey only made it to windshield-height.

The turkey shot straight up into the sky, then plummeted to earth like a stone. The truck’s windshield was a spider web of disaster—half of it was concave from the turkey’s impact. The two twenty-something men in the cab were shaking their heads; one was already on his cell phone.

Animals… they love to cross roads. God knows why.

I made it to my gig unmolested by wildlife, made folks laugh for ninety minutes, sold them a lovely amount of merchandise, and then hopped in my car for the drive home.

I didn’t make it far.

It was dark, but the road was empty and I could see far into the distance. Everything was clear all the way to the fullest reach of my headlights.

And in an instant, a deer was in front of me and suddenly I was driving over the world’s largest (and squishiest) speed bump.

There was nothing I could do; I couldn’t have swerved had I wanted.

Have you seen the video of the woman hit by the self-driving Uber? This happened faster. The woman in that instance was walking. The deer was… sprinting? Galloping? I’m not sure which verb to use, but it was in a hurry.

Your brain works in funny ways in moments like that. It goes into… not denial mode exactly, but I got hopeful. Logically, I knew I had just hit a deer. But for a moment, I thought: “Maybe it’s not that bad. Maybe I can make it home.”

I mean, as I was slowing to a stop, I realized my airbags hadn’t even deployed. That meant the hit wasn’t bad, right?

And then every light on my dashboard illuminated, and the smell of oil hit my nostrils.

I pulled into a driveway—I wanted to stay safe and get off the road—and got out and looked at my car. Half the undercarriage was gone. Including, of course, the oil pan. It was just… gone.

I nodded as I thought, “Well, that must be why the ‘check oil’ light came on.”

Then I had the realization, “Goddammit, I just had the oil changed on Monday…”

What a waste of money that was.

The missing machinery aside, what was under was blood and fur, intermingled with gobs of venison everywhere.

My first thought was annoyance. Maybe if I were a better person, my first response would be empathy, but I was annoyed. The entire road before and after me was empty, yet the deer chose that specific time and place to cross? I mean, I know deer have a brain the size of a walnut, but Jesus…

No part of it went, “OK, I need get from here, to there. I don’t know what those lights are moving quickly toward me… I could wait and see… or I could just bolt out now!”

I got back into the car and grabbed my phone; the signal was weak, but I got a call into the Mrs. She, being an amazingly resourceful woman, immediately started lining up everything possible insurance-wise. She told them what happened, started writing down information and texting it to me… In short, she was a lifesaver.

(Later, she would tell me she was so steady because she could tell from instant one that I was fine. “The fact you were calling so late meant something was wrong. As soon as I heard annoyance in your voice, not pain or worry, I knew you were OK, and that was all that mattered.”)

While I sat in the car, waiting, I did what most of today’s populace would do: notified the world of my situation via social media.

As the responses began pouring in, I noticed everyone was focusing on the positive: Thank God you’re OK. Because that’s what friends and family do: they focus on the positive.

I don’t want to say I focus on the negative, but I was thinking of every single thing that had to happen since leaving my gig to put me on that rural Wisconsin road at that exact moment.

I had to leave my gig exactly when I did. Also, I had to fill up my gas tank before the show, not after. I had to be traveling the exact speed I was the entire drive. Had I gone one mile per hour faster or slower, I would have been in a different spot when the deer darted under my car.

Or, if I really want to play this game, maybe I have to examine both sides of the coin. If I had been one second off, maybe the deer would have gone through my windshield, killing me.

Or, since my brain won’t just shut up and accept this—and I can do this forever, spitting out scenario after scenario—maybe it would have bounced up over my car, leaving me with cosmetic damage and allowing me to drive home.

Maybe I would have seen the deer a second sooner, swerved, and ended up in a ditch or hit a tree. It was 10 degrees out. If I had been in a snowy ditch, I’d have frozen my nards off. If I’d crumpled the car against a tree, maybe I wouldn’t have walked away unscathed.

Considering how empty the road had been, it was as if the deer had been lying in wait to suicide itself specifically against my car. I mean, I’m not positive, but if I really think back on the moment, I’m pretty sure I heard the deer shout “Allahu-Akbar!” right before impact.

The police arrived and filled out an incident report for insurance purposes, and then the tow truck showed up to haul me away.

The tow truck driver, by the way, was a nice man who took me to the closest small town, not the mid-size city I requested while speaking to my insurance representative. My ever-resourceful wife had lined up both a rental car and hotel room in the mid-size city.

(As it turned out, I got trapped somewhere without a decent hotel or auto rental facilities. I ended up trapped in a seedy motel with a barely-working heater and whoops-your-finger-slipped-through half-ply toilet paper. I’m pretty sure my neighbors two rooms down were cooking up a batch of meth. I used all three locks on the door and slept on the sheets fully dressed, the movie Vacancy running through my head.)

The next morning, my loving and kind mother drove 90 miles to get me.

We made our way over to the lot where my 2013 Honda Fit had been dumped, so that I could clean it out. In the four-and-a-half years I’d had her, I’d racked up 160,000 miles. That meant the insurance company wasn’t going to foot any repair bills, they were going to total it out.

I was bummed; I’d counted on being able to drive the car a minimum of four more years.

I grabbed all of my kids toys, their car seats, the ledger I keep track of my trips in for taxes, and that was that.

Together my mom and I drove another 90 miles to meet up with my wife and kiddos. She was coming up from our hometown and meeting us halfway.

As my mom and I made our way down to our destination, we drove past six deer carcasses and two torn off bumpers.

Apparently I wasn’t the only victim of vehicle-assisted suicide by a deer that weekend.

Like the way I cobble words together? Visit my Amazon Author Page. Buy a book and help me buy a new car. Me love you long time. <3