A Pair of Troublesome Teenagers

I was a complete shit as a teenager.

Which is OK, because that’s what teenagers are supposed to be: complete shits.

Just after Halloween, I was taking my kiddos to school and passed a yard filled with smashed pumpkins. The visual sent me down a reflective path. With a chuckle, I texted my friend Mark, musing on how many pumpkins we had destroyed back in the day. From there, a nostalgic back-and-forth occurred, each of us recalling some of the nonsense we pulled.

“We were so deviant,” he noted.

Which is true, we were.

But I don’t know that we did anything worse than kids ever do. You be the judge.

(Since there’s a Federal Crime mentioned, I must point out that I’m writing everything from an O.J. Simpson “If I Did It” point of view. Please put the word “allegedly” in front of every single detail in this piece. From here on forward, it’s all lies. Really.)

We stole government roadblocks, and would close off a section of Mark’s subdivision. By that, I mean he lived in an area that was a series of cul-de-sacs strung together by one main road.

That main road was attached to the rest of the city at two points, one to the North, and one to the South. The road itself was as curvy as a Playboy centerfold.

We’d wait until nightfall, and then place roadblocks at the Northern, more secluded end of the road. Then we’d go just around the nearest corner down the road and place the other roadblocks. Anyone pulling up to the Northern entrance would get furious, because getting to the Southern side via other streets was a ten-minute drive.

Now, if they happened to live on the Southern end of the artery, big whoop. They had to go out of their way a bit, yes, but they didn’t get the full damage of our prank. The best case scenario was someone whose house was on one of the two cul-de-sacs between the roadblocks. Remember, pulling up at the Northern end, they couldn’t see the roadblocks we had placed down the artery a way, just around a corner.

So they’d drive all the way around to the Southern access point, start to backtrack up the main road to their cul-de-sac, and stumble across another set of roadblocks. Technically, it meant they couldn’t gain access to their own house.

Mark and I would hide in his front yard–which happened to be perfectly placed between the two sets of roadblocks–and laugh our asses off. Especially after the police would arrive to investigate, eventually removing the roadblocks after calling in and discovering them illegitimate.

We also went sledding after hours at the local ski hill.

Around midnight a dozen of us would take sleds and hike to the top of the hill. It took twenty minutes, easy, meaning we’d only do one trip per visit.

Once atop our perch, we’d usually notice our presence hadn’t gone unnoticed, and that a pair of hotel security guards were trudging up after us.

Read that again: we’d be on the hill illegally, so instead of hiding and waiting at the bottom to capture us, hotel security would climb the hill in pursuit of us.

(They’d also be carrying flashlights, so we could see them every step of their way. Not a very stealthy crew, they.)

Well, we weren’t dumb, so we’d wait until they were about three-quarters of the way up, then climb on our sleds and shoot down past them.

They’d swear and yell as we passed, and then do their best to hurry after us. But, come on… we had to be going at minimum of twenty-five miles per hour. We were long gone every time they finally got back down. There’s a reason so many jokes are made about security guards, and these guys lived up to every stereotype.

Another bit of mischief was: in high school, during lunch break, Mark and I would steal away to a secluded cubby by the gym. We’d take a cigarette, light it, and then set out a string of firecrackers.

We’d lay the fuse across the cigarette, and then saunter to the other end of campus. By the time the fuse hit the burning cigarette and the firecrackers went off, we were nowhere near the scene of the crime. Once we used a string of 1,000 Black Cats. That was a fun day. The cacophony went on for several minutes.

(Point of note: school shootings weren’t a thing back then. Everyone knew immediately that firecrackers were going off; the idea someone would bring a gun to school and start shooting… well, that was literally unheard of.)

The worst thing we recalled doing was stealing a three-foot, light-up Santa Claus, and then collecting the reward for returning it. If I harbor any guilt for past actions, that one pops to mind.

When it rained, we’d do donuts on lawns and in the high school courtyard. The courtyard contained a decent swath of grass, and was between the two ends of our school overlooked by a main hallway that ran the length of said school. During a particular soggy evening, we sent so much grass and dirt astray that the next day students were amazed by the carnage; it was the talk of all classmates.

As stated at the beginning of this nonsense, Mark and I also rounded up and smashed pumpkins.

Most instances would involve driving around until we saw a particularly pleasing set of carvings, and then we’d dash up, grab the orange beasts, hoist ‘em over our respective heads, and then launch them as far as possible.

After an astute neighbor saw us in the process of that, however, we switched things up. We began a series of quiet snatch-and-dash missions. We’d load up the trunk, and then take them to a train bridge and drop them to the tracks below. The end result was as beautiful as anything David Letterman once threw off his five-story building.

We got pulled over once—the reason why escapes me; speeding? Running a red?—and the police officer decided to search the car. Our trunk was filled to the brim with pumpkins.

Naturally, the cop was suspicious as all get out, but what could he prove? Yeah, we had a ton of pumpkins in the trunk, but did he really want to go through the hassle of trying to find out how we had obtained them? Was he going to go house to house, asking people if they were missing pumpkins, and did they want to press charges?

Neither of us could remember what was said, but in the end the cop rolled his eyes and let us go.

(Point of distracted note: we also recalled being pulled over while out hunting mailboxes. We had looped the same rural road twice because there was a particularly pesky mailbox we were trying to smash, and it needed two passes. Unfortunately, the second time through the police officer sitting in a speed trap realized something was up. He flipped his cherries and blueberries our way, forcing us to pull over. He knew we were up to no good, but one of us—I think me—said we were trying to find a party and couldn’t locate the house. The cop told us we were too young to be drinking, and to go home or find something to do. Which we did, each of us overjoyed he didn’t search the car. Who knows what he would have done had he found the baseball bat between the passenger seat and door.)

(Second point of distracted note: to any teens reading this, remember that Stand By Me is a movie, and that movies use special effects. When Ace and the boys are hitting mailboxes from their car, those mailboxes are rigged to shatter. If you go driving by a mailbox at 30 mph and take a swing at it… well, let’s just say you better have a tight Goddamn grip on your bat. Newton knows: for every action, there is an equal but opposite reaction. Suffice to say, we learned to drive slow on our hunts. Anyway, back to our regularly scheduled story…)

So, yeah. We were shits. But were we normal shits, or exceptional ones? We didn’t drive drunk, we didn’t do drugs… Most of what we did was mischief, I think.

Mark said something interesting during our exchange: “There is so much bad crap that I can’t tell my kids…”

The words made me pause.

Why hide or lie?

I’m going to tell my kids what I did, if only in a fruitless attempt raise them to be better than I was. I don’t want them—OK, let’s be honest, him, because if anyone is going to destroy property it’s going to be the boy, not my daughter—smashing pumpkins or beating down mailboxes. I don’t want him tearing up anyone’s lawn and thinking such an action is fine-n-dandy.

But if either of them does get in trouble doing stupid things? Well, I’ve been there. They’ll be punished, sure, but I won’t be shocked or tell them I’m disappointed in them. I’ll chalk it up to teens being teens.

Likewise, I won’t be overly upset if someday our pumpkins get stolen or smashed. I won’t believe it’s karma or anything silly like that—I know way too many complete bastards who have had untold success for me to believe in karma—but I’ll get it. I won’t be happy, but I’ll get it.

I’ll explain to my kids, who will no doubt be as sad as I made many kids back in the day when I stole pumpkins, that it happens.  Then we’ll move on with our lives.

And maybe, just maybe, I’ll smile wistfully in remembrance of what was.

Curious as to what kind of dad I am? Click the pic, buy my newest book, and find out. 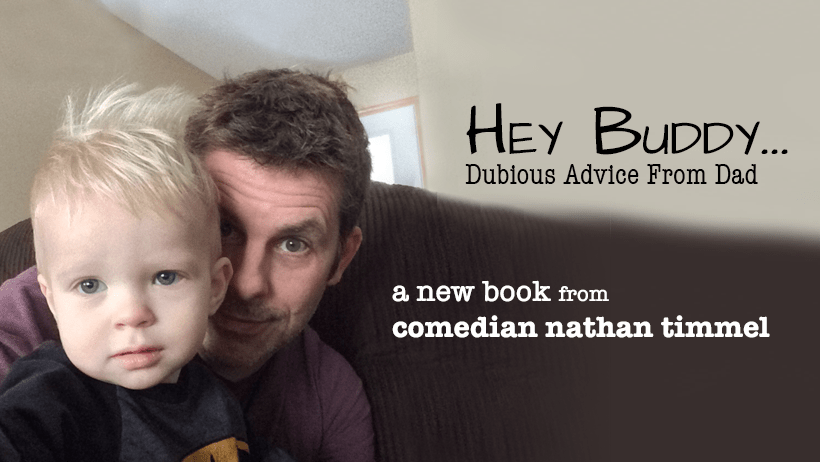