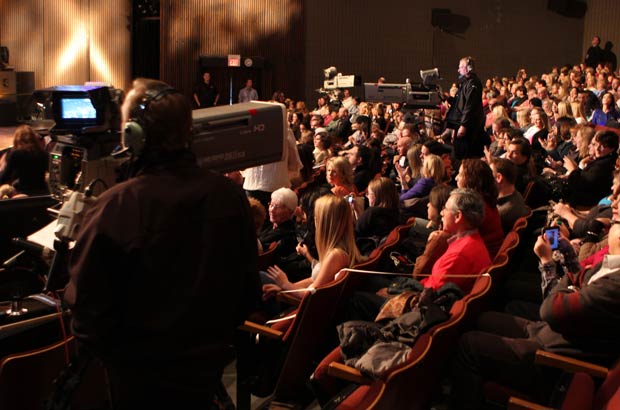 When I moved to Los Angeles, I met a comedian named Mike.

He was a nice and funny fellow, and told me a story about his first experience with Hollywood.

“I got cast in a movie,” he began, naming a big-budget sports comedy I had seen and enjoyed. “I was the ‘bad guy,’ so to speak. Every time the hero’s team played mine, he and I would get into it. I told everyone. My friends, family, strangers… It was my big break. Then the movie came out and I had been cut from every scene. It was so embarrassing…” 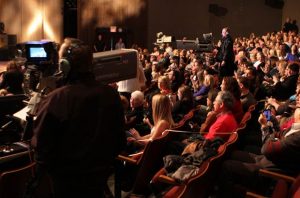 It began with an email.

“Hi Nathan, I’m an associate producer for a syndicated talk show based in Los Angeles. I read an article you wrote for The Good Men Project about how your wife makes more money than you, and we’re doing an episode on breadwinning wives next week. I wondered if you two would be interested in coming on and discussing your experience.”

I was a mix of ambivalent and game, so I forwarded it to my better half. She was curious, and said I should shoot the producer a reply. From there, a back-and-forth began; emails, followed by phone calls. We went up the power chain from associate producer to producer, each time answering more and more questions. What were we like as people? What was our story? How was our marriage? How did we respond to questioning?

In reality, they were only asking one thing: would we make good guests?

After a final, thirty-minute speakerphone conversation with the two of us, it was decided yes. We were just what they were looking for, and things began moving forward in earnest.

But there was a problem: they wanted us there Thursday, to film on Friday. My wife had an engagement on Thursday night—a concert in Minneapolis, which is four hours from our home. There were no Red Eye flights; would it be possible to leave crack-of-dawn Friday and fly in day of the show?

The producer was concerned, and decided “No.”

If anything happened—a flight delay, day-of-show traffic—the entire schedule would be thrown off. We had to leave Thursday, or we weren’t viable.

My wife was torn. Being on TV might be fun, but was it worth cancelling her plans; worth skipping a concert she had waited months for and spent a lot of money on? Channeling her inner Vulcan, the Mrs. determined that logically she could attend a different performance. TV shows, however, didn’t come a-knocking every day. She offered her tickets as a BOGO, eating the cost of one in the process.

Crunch time began. We had to film and edit an introductory video to send in. I had to make a B-roll video of me performing at various comedy clubs. We had to comb through pictures and fire off as many as we could for the talk show to pick and choose from. We had to contact photographers with release forms, and we had to sign 1,000 forms (and fill out a few others) ourselves. My wife requested two vacation days from work; her mother agreed to take care of our kiddos.

With all ducks in a row, we were off; Hollywood awaited. Our bags were packed with the several outfit options wardrobe had requested as we flew into LAX, got shuttled to our hotel, and went to bed exhausted.

The next day started out fine.

We and the other two guests were picked up at the hotel and taken to the studio. Along the way, we got to know one another. As the theme was “Breadwinning Wives,” it turned out that the Mrs. and I were the couple that made it work. Next was a woman whose marriage had fallen apart because she out-earned her husband, and the final guest was a consultant who helped companies make their workplace better for female breadwinner employees. It all made sense.

At the studio, we went into hair and makeup and were given a final meeting with the producer. The rundown was: we would be seated in front of the audience. On segments one and two, the host would interview his special guest, a contestant from The Celebrity Apprentice. Segment three was the Mrs. and me, four the divorcee, five the consultant, and six a panel of the three female guests.

We were escorted into the studio-proper where I noticed something odd; the audience didn’t match the show’s demographic. As you wouldn’t expect to see sixty-year-old lumberjacks at The View, what I saw in the stands didn’t compliment this show.

I didn’t have time to dwell on it, though, as we were seated and told everything was about to begin. The host arrived, announced the contestant, and we were off to the races. The contestant was a high-energy snake oil salesperson. Everything was dramatic, loud, and unfortunately lacking substance.

“You need to be financially independent!” the contestant shouted. “Start your own eBay store today! Clean out your closet! Sell your junk! Get paid!”

I plastered a robotic smile across my face and applauded politely, but inside was thinking, “How would an online yard sale make you financially independent? How do you restock your inventory: buy new and sell used?”

I also wondered what the contestant had to do with breadwinning wives.

Then something awkward happened.

We had been told the host would ask us a question while we were still in the audience. What they didn’t tell us was that the question would be somewhat loaded.

One thing my wife and I made clear throughout our conversations with the producers was: this works for us. My male ego isn’t disrupted by the fact my wife out-earns me, and my wife doesn’t feel we’ve sacrificed anything as a family due to our dynamic.

So when she was asked, “What have you sacrificed?” my wife was thrown.

She answered the best she could, and then the host asked how I felt. I gave the answer I had given during every pre-interview: “I’m fine with it. My wife is awesome, and it doesn’t sting a bit to be out-earned by her.”

Then the contestant jumped in and told me to start my own online store.

I smiled mechanically and tried to hide an eye roll.

The second segment ended… and the contestant remained in place. My wife and I looked at one another.

“I think we just got bumped,” I whispered.

Just then she saw the word “No” followed by her name being typed on to the monitor.

While still on break, the contestant shouted over to us, “Do you feel better about your situation now? Did my advice help?”

My wife and I were confused. Our situation? We didn’t have a situation; we were good.

I sort of shrugged and played dumb; my wife answered hesitantly: “We… actually already have viable side projects. Both of us.” I could tell she wanted to be honest—start an eBay store? Are you insane?—but wasn’t sure if she should be.

The contestant smiled and gave us a thumbs up before turning back to her handlers.

The third segment started; no us, all contestant. When the section ended with the host saying, “Next up, a divorcee…” we knew we had been cut.

The consultant went up after the divorcee, and while my wife was invited up to the final panel everything seemed pointless by then.

The show wrapped up, and we were escorted back to our dressing room. The producer came in and said things had “gotten away from them.”

In the end, it was a wash. For the most part, my wife and I laughed. We couldn’t believe they flew us all the way out there for nothing. At the same time, given the hassle of everything—from all the phone interviews and forms to arranging child care—as well as the fact my wife could have gone to her concert…

While waiting for the shuttle to the hotel, my wife decided, “The only part I didn’t like was feeling expendable. If someone had come over during the break and told us, ‘We’re so sorry, we’re going to have to cut your segment,’ it would have been fine.”

The fact we had to figure out in real time we were being shoved aside bothered her. Which I get, but that’s how Hollywood works. Hollywood doesn’t apologize. It does what it wants and moves on.

Still, it’s all good, and in fact the funniest moment came as we were preparing to leave. With a happy smile upon her face (and possibly forgetting what had just happened), the producer told us: “We’ll tell you when your episode airs!”

Why? So we could watch ourselves not be on TV? We do that every day.

It was still a neat experience. To be thought of in the first place, to be flown to L.A., put up in a hotel… it was a free mini-vacation, and you can’t complain about that.

When it all began, I suggested we not tell anyone until everything was over. I had learned well from my friend Mike and knew it would be better to be cautious rather than plaster our social media accounts with “We’re gonna be on TV!!!” So unlike Mike, we didn’t have to explain to anyone after the fact what happened. I’ll call that a win any day.

I will say this: When the divorcee went up, a member of the audience came down to fill her seat. I leaned over to the eager fellow and whispered, “Central Casting?”

I smiled to myself; of course. Central Casting. The live audience was made up of paid actor and actresses in waiting. People looking for any toe-in-the-door they could find into the industry. That’s why they looked so out of place.

(Before we left, I discussed this with an employee, one who confirmed that most of the audience was indeed paid extras.)

Also, when the contestant asked if we felt better about our situation, I believe the question was genuine. I don’t know what information the contestant was given, and conflict does make for better television than “Everything is A-OK.” Maybe we were presented as a couple in trouble. Maybe the contestant thought our marriage was fraught with tension. So the contestant probably thought we needed help, and it was kind of the contestant to offer it. Still, I won’t be starting an eBay store anytime soon.

But if any other talk shows want to fly us somewhere, put us up in a nice hotel and not use us?