You Fuckers Frustrate Me 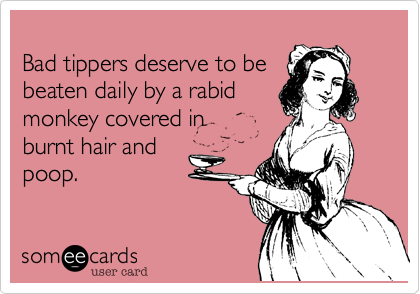 I spent around ten years working in the restaurant industry. Busboy, waiter, dishwasher, bartender… I was all over the place.

It can be a thankless job; people are rude, picky, stingy, stupid… I fully believe the world would be a much better place if everyone had to spend a year in the service industry. Getting the taste of humility in your system makes you a much kinder, better person when dining out or interacting with people in general.

Because of my experiences, when I visit comedy clubs I have a soft spot for the servers. I know they’re hustling to get people their drinks for the lovely wage of $2 an hour.

That’s not a typo.

$2.13 is the standard wage of a server. It’s called “Working for tips” for a reason; that dollar you leave when you order a drink isn’t just a gratuity, it’s a lifeline. Your generosity is supposed to make up for the abysmally low wage they receive.

This gets lost in modern society, because every Goddamn business in the world has a tip jar now. From coffee shops to thrift stores, I’ve seen tip jars everywhere but gas stations and McDonald’s, but it wouldn’t surprise me if they eventually turned up there.

(More surprising would be seeing me in a McDonald’s.)

At a comedy club, it is standard protocol for a comedian to mention servers toward the end of a set. Taking a second to toss, “Hey, leave a tip” into the microphone signals the show is wrapping up, and gives us a moment’s respite from slinging jokes.

Some comedians use this as an opportunity to get a small chuckle at the expense of the workers: “Don’t forget to tip them, I’m going to be selling them pot later;” “Leave a tip, because I’m leaving one of them with an illegitimate child.”

Ha! It’s funny because the person who just schlepped drinks all night got shit on. Get it?

It’s not much of a speech, but it’s heartfelt, and I’ve had clubs tell me the servers actually see an uptick in tips on weekends when I’m there. Such things make me happy.

In part I feel I’ve let them down, but more than that it pisses me off that someone so cheap left their house first place.

So here’s the deal: unless you received the absolute worst service in the world, where the server got your order wrong, didn’t care, spilled drinks on and ignored you, have some empathy and understanding.

Sometimes servers are hurried. Sometimes someone calls in sick, leaving the venue understaffed. Sometimes your little whims are not catered to immediately and 1,000% to your satisfaction. And you know what? It’s life, and shit happens. If your server has put in a decent effort to take care of you, then take care of them. If you are a cheap shit, then you are the kind of ass cactus no one likes. You are the reason automatic gratuity was invented.

(You’re also the kind of asshole who complains about mandatory gratuity being added to a bill.)

If you do not understand the importance of leaving a gratuity, stay the fuck home you wart on the ass of society.

You’ll make everyone happier by doing so.