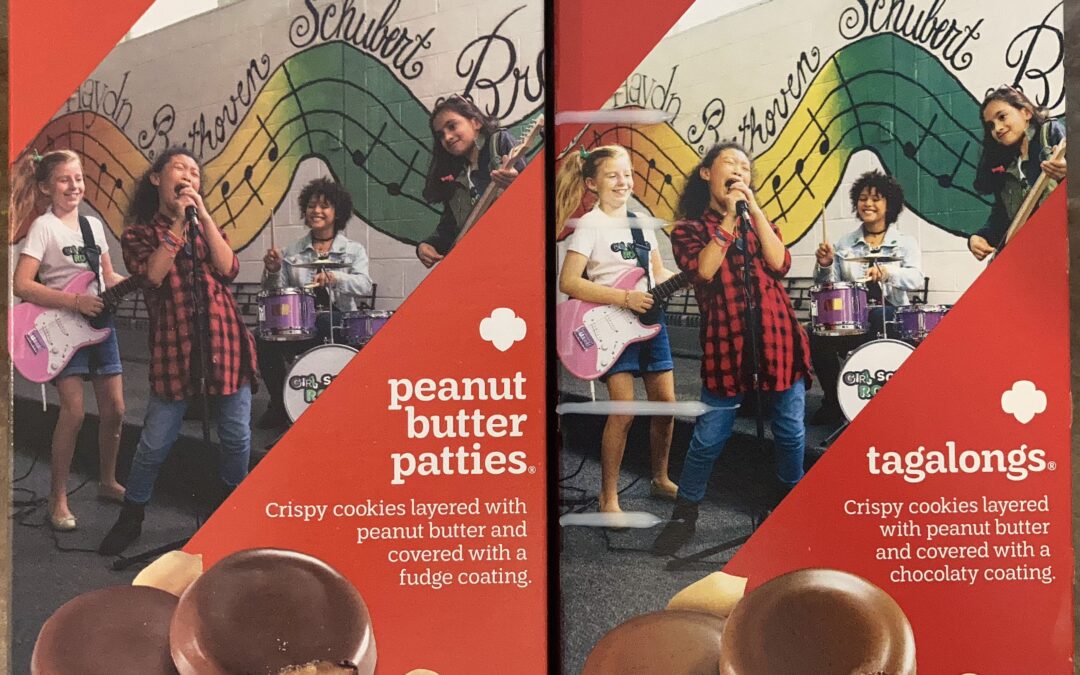 A while back, I wrote a whiny blog about an experience I had with the Girl Scouts and their cookies.

The Summation: I received several batches of yucko cookies, and when I pointed this out to the Girl Scouts, they shrugged and said, “Not our problem.”

After a several year silent protest of not buying the once-tasty treats, this year I caved and decided to give everything another go. I ordered from a friend’s daughter, and right after doing so received notice from my mom: “I bought you several boxes of Girl Scout cookies from our neighbor’s kid.”

My mom lives in Wisconsin; I live in Iowa.

Both orders arrived around the same time, and while I didn’t pay any attention to them, my wife quickly noticed a one-of-these-things-is-not-like-the-other difference.

(See the above picture.)

Her favorite cookie is the Peanut Butter Patty, so we had two of those. Only one wasn’t called PBP, it was called “Tagalong.”

My Thin Mints were just Thin Mints, but the peanut butter cookies had different names. Why? Because the Girl Scouts (as said in the previous blog) don’t make their own cookies, they farm the production out to baking companies. And apparently they do so to more than one baking company. Two, to be exact: ABC Bakeries, and Little Brownie Bakeries (LBB).

My wife said the peanut butter cookies were very similar, but gave the edge to the Tagalongs, by LBB. Chocolate > fudge, after all.

The Thin Mints weren’t even close. LBB Bakers made their cookies not only tastier, but “tougher.” And I mean that in a good way. LBB Thin Mints snapped when pressure was applied. ABC Thin Mints, on the other hand, crumbled. They fell apart and turned to dust.

LBB Thin Mints also looked and tasted better. The ABC cookies had the same gray, pale/stale chocolate look as the batches I had previously complained about. LBB cookies were a dark brown chocolate.

Anyway, if you’re going to buy Girl Scout cookies, find out who’s selling from LBB Bakers, and go that route.

Read more of my nonsense.