How to Book a Comedian for Your Corporate Event: Part 2, Make Your Show Great 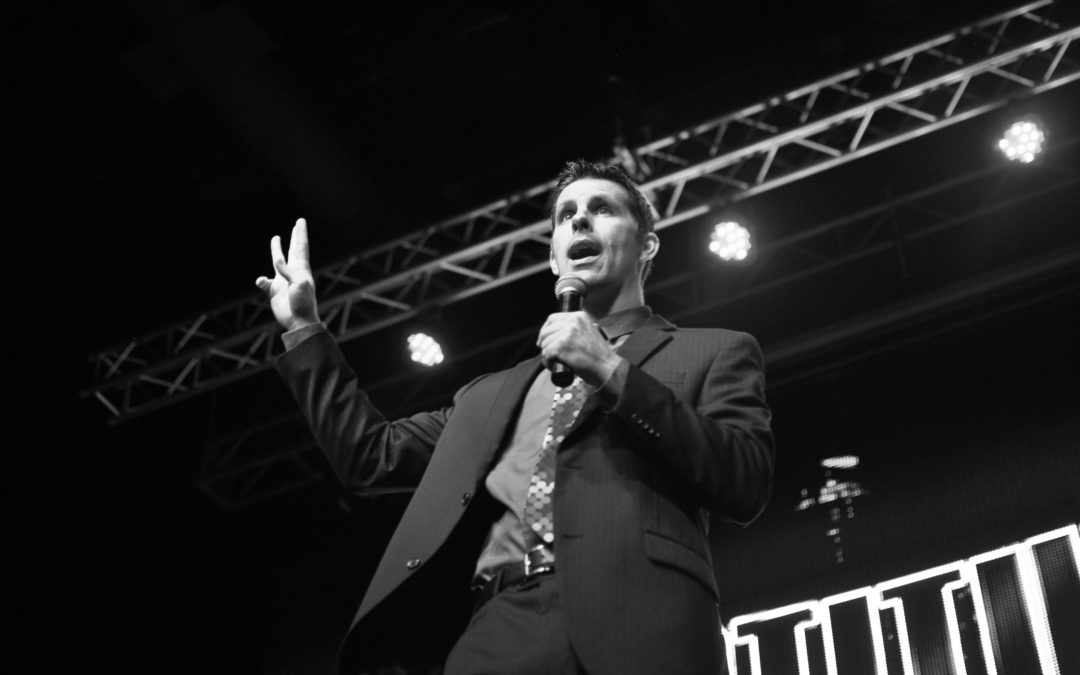 I perform stand-up comedy at a lot of corporate events.

If there’s one thing I’ve learned, it’s that a corporate events/holiday parties are about socialization. People are looking to have a meal, maybe a few drinks, and to chat with friends. Entertainment is a bonus, but not the focus of the night.

So, the first way to have a successful comedy show is to watch the clock.

Oftentimes, the first request I get can be for 60 minutes, sometimes even 90 minutes. The event planner thinks they’re getting the most out of their entertainer. The problem is, when you’re at an event to blow off steam, having to sit quietly and listen to someone yammer on forever isn’t the most fun, even if the person yammering on is funny.

When I get asked if I can perform for 60 or 90 minutes, I always say “Yes,” and then I offer a tiered pricing system.

Because I know there’s a difference between a comedy club and a corporate event.

At a comedy club, people have actively made the decision to leave the house and see live comedy. It’s their thing, and they’re ready to sit for two hours and focus on a jokester slinging the funny.

At a corporate event, comedy is just part of the proceedings. It’s a nice bonus to the evening, but it’s not the focus of the event. As stated, there’s usually dinner, drinks, and socialization. On top of that are awards, speeches, promotions…

Quite a lot goes on at a corporate event, and knowing that, I offer clients the option to spend a little less money and receive a little less comedy.

Does this shoot me in the financial foot?

I could easily always just take the most money possible and not worry about the rest. But, I’d rather have a happy client than a neutral or unhappy one. I understand that at a corporate event, not every employee is interested in comedy.

Case in point: I did a trade show where I was told 200 people would be in attendance. After dinner, however, 150 people got up and left before I started. I ended up performing in a mostly empty hotel ballroom.

I didn’t take it personally; they’d had a long day, and that was that. Comedy just wasn’t their thing.

After the show ended, the organizer was apologetic; he explained that they were at the end of a 3-day event, many people were tired, quite a few were leaving early in the morning and wanted to get back to their hotel room…

I graciously thanked him for the apology, and told him I was beyond happy to have performed at the event for those who stayed. I’d rather have 50 people who want to see a comedy show in the audience than 150 disinterested people who feel they have to be there.

Which brings us to point number two: have the show cap the evening off.

While I just said that many people leave before the show starts, I also pointed out that that can be a good thing.

Sometimes corporate functions have giveaways. Especially if it’s a holiday party. Someone is winning a trip to Hawaii; someone is crossing their fingers for that 50” TV…

If you put the giveaway after the comedy performance, you’re forcing people who might not want to be there to sit and wait. I’ve had that happen, and there is nothing worse than performing for hostile people who feel forced to be there.

I had to go up before the giveaway once, and I tell you this: it was horrible.

Comedy is a nightcap. A way to bid the evening adieu. Put it last in your lineup, and as George Costanza figured out: leave on a high note.

So, there are your two tips to having a great corporate comedy show.

I hope your event is a success.