An Audience of Seventeen Soldiers 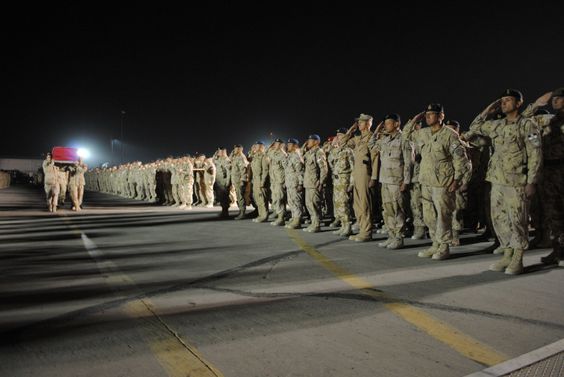 As a comedian, I have been lucky enough to provide laughter to American soldiers stationed far from home. In October, 2005, I traveled to Afghanistan.

According to the politicians it was “Mission Accomplished” in Iraq, but to those in Afghanistan things were far from over.

My landing point was Kandahar.

I was originally supposed to start performing around the country immediately, but transportation was scarce due to the Kashmir earthquake in Pakistan. Any available helicopter was put to use for humanitarian missions, and carting a comedian around was rightfully deemed not essential.

During this downtime, I had the unfortunate opportunity to attend a ramp ceremony. An American soldier lost his life in the Afghan hills; I was allowed to witness the loading of his flag-draped casket aboard the plane home.

The Kandahar military base, in 2005 at least, was international in nature.

I couldn’t tell you exactly how many countries were represented within its walls, but I visited with soldiers from England, France, and Romania, to name a few. The military uniform creates a brotherhood that surpasses differences between governments. While politicians argue, soldiers unite.

I mention this, because even though the ceremony was honoring an American soldier, men and women from every nation appeared. Which specific flag they saluted didn’t matter; everyone respected the dead, borders be damned. Here’s the kicker: the fallen soldier wasn’t even stationed at Kandahar; he was from a base out in the field. This means there is an overwhelming probability that those paying tribute—foreign or even American—had never even met the man.

They were there due to honor.

They knew that somewhere, parents were tearfully awaiting their child’s arrival, and that a friend of the fallen, a fellow soldier, would accompany the body all the way to its destination. Once there, that person would look a mother, father, or wife in the eye and hand over the flag currently draped across the coffin. That soldier might have the awful reality of seeing heartbroken children, sons or daughters of the deceased.

Such a moment could crack a heart of stone.

I don’t know how often civilians are present at a ramp ceremony, but the experience left me emotionally confused. I felt humbled, and at the same time embarrassed. Like I was a tourist attending an event I had no fucking business being at. Most of all, I felt sorrow, due to the loss of life.

Several days after the ceremony, logistics allowed a spare helicopter to fly me to perform for soldiers at another base. I didn’t realize until landing that it was the outpost of the soldier whose coffin I had viewed through conflicted eyes.

The show was scheduled for 10am.

The military doesn’t run like a nightclub; you don’t just perform in theaters at night. Whenever and wherever time allows, you do your best to make soldiers giggle. It might be in the morning in a mess hall, the afternoon out in a courtyard, or at night on a makeshift stage without benefit of a P.A. system.

At this particular location, tensions were justifiably high.

The soldiers I was about to entertain had just returned from an overnight patrol. They had been searching for the insurgents who killed their comrade. Given how many hours they had been awake, they were looking for food, a shower, and sleep. It is doubtful anyone was in the mood for comedy.

The commanding officer informed me he was going to issue an order of attendance.

Such news made me uneasy, as not only was the current situation already not ideal, but mandatory turnout brings in a reluctant audience.

The show was to be performed at the base headquarters, in what served as the recreation room. This turned out to be a living room inside a small Afghani home.

Slowly, seventeen tired soldiers with sleep-deprived eyes made their way in to sit wherever they could.

They sat on couches, chairs, even the floor. Some of the faces seemed so very, very young to me. Being nineteen or twenty might make one an adult by default, but when I think about what I was dealing with at that age, compared to the enormous stress and pressure those in front of me were living with daily? There is absolutely no parallel.

Though exhausted and forced to be there, those soldiers made a damn fine audience.

Over the course of twenty minutes, they smiled, then laughed, then eventually applauded as their body posture went from rigid to relaxed. Their commander was a veteran and he knew that sometimes youth has to be told how to deal with stress.

Even though they had lost a brother in arms—someone most likely a close friend—they were still alive. Even if comedy seemed like the most inappropriate thing in the world, they needed to understand they still had laughter inside them.

While initially I was wary of performing that morning, that show will remain the pinnacle of my career.

Of all the hours I’ve spent cajoling strangers into smiling that one held more meaning than any other.

I have a picture of that day, taken after the show. I’m sitting on the floor in the center of everyone, and my eyes are wide, as if I was just surprised by the flash of the camera and thought I had several more seconds to ready my face. Those surrounding me are a mix of smiles and contemplation. They’ve enjoyed the show, but laughter in such a place is fleeting.

Tomorrow I will be gone, and they will remain. Violence will surround them, and the brutal weight of war will be back upon their shoulders.

I made no real difference in their lives; I’m not delusional. But for twenty minutes, I helped.

Even if only marginally.

(This piece was originally published in the book I Was a White Knight… Once.)