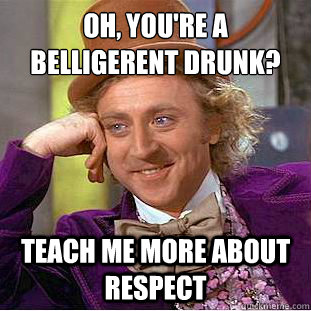 In my line of work—stand up comedian—you deal with people who are drinking. As a whole, people are good, and can handle their alcohol. But every so often you run into folks who would have done society a favor by staying home and downing a case of beer from the safety of their couch. Sometimes they heckle; other times they’re simply belligerent. Either way, they usually have to be kicked out of the comedy club.

I’ve always wondered what they thought of their behavior the next day, when they sobered up. Were they embarrassed by their actions? Any decent person would be. When dealing with the unwashed masses, however, you don’t always get decent people.

Case in point: the other week, a table of four had to be removed from the showroom during my set. They had talked all through the host, talked all through the middle comic, and were still talking when I hit the stage. Fortunately, by that point, management had lost their patience. After I had turned to them twice and said, “Hey, quit talking,” they were asked to leave.

There are two ways to exit a room you’re no longer wanted in: quietly, head hung low, or boisterous and defiant. On this particular occasion, it went 50/50; two people quickly slinked away, embarrassed by the attention. The other two at the table were stunned.

“What? We were just talking!” the woman shouted.

“They don’t have to listen to us if they don’t want to!”

Apparently the woman didn’t understand how audio waves work, and that you can’t really ignore sound.

To accelerate their exodus, the manager asked the audience, “By a round of applause, who wants these people to leave?”

The whole crowd erupted; the table had been sufficiently annoying enough to get on everyone’s nerves.

After several minutes of back and forth, the couple finally made their way out, throwing a couple parting shots my way, since I had dared tell them to quiet down.

As the collective rest of the audience cheered the departure, the thought I mentioned earlier crossed my mind: what would those people think of their behavior once they sobered up?

Lucky me, I got to find out.

The next day around 5pm, a post from the argumentative woman—Cindy—appeared on my Facebook Comedy Page: “Don’t go see this guy. Our table were laughing and talking and we were asked to leave as we left he had the audience clap to see us go. The comedian before him had no problem with us and encouraged the noise and laughter.”

As I made my way through the grammar and syntax errors, I had to give a combination laugh and sad head shake. As stated, this post popped up around 5pm. That means Cindy had all night to sleep it off, and all day to come to terms with her behavior. And when all was said and done? She used willful ignorance to double down on her stupidity.

I didn’t even consider responding to her post; there didn’t seem to be any point. But that doesn’t mean I didn’t wonder how some people make it through life when they’re oblivious to how the world works.

Dissect her very own words: up front, Cindy admits they were talking. She doesn’t even bother to lie, or say “We were kicked out for absolutely no reason!” Nope, she says they were laughing (lie) and talking (truth).

Next, she isn’t self-aware enough to understand that the audience applauding her departure means they were more than happy to see her go. It’s unlikely she made it her whole life without hearing spontaneous applause, which means she willfully denies the fact she wasn’t wanted there.

Finally, the opening comic wasn’t appreciative of her at all. I know, because when he walked off stage he was furious. He even, and somehow Cindy missed this, yelled “Shut the fuck up!” at her table. Twice. I’m not sure how Cindy interpreted “Shut the fuck up!” as encouragement, but I think we can determine from her writing skills she’s not the brightest light on any Christmas tree.

That night, when all was said and done I thanked the manager for his actions, and he laughed; “Oh, that wasn’t anything. If you thought they were bad, you should have been here for Screech.”

He described how during Screech’s set, a man who identified himself as a lawyer got into it with the Saved By the Bell star. The lawyer was exceedingly drunk, and started heckling. This set Screech off, and irritated the audience. They went back and forth for several minutes, with Screech getting in jab after jab and the lawyer getting angrier and angrier as the audience laughed and applauded at his expense.

Eventually, realizing he was on the losing end of the verbal jousting, the lawyer stood up, hoisted twin middle fingers into the air, and shouted “FUCK YOU!” to the world as he stormed out.

A fitting end to his derailing of the comedy show, but that’s not the conclusion to this story.

Several days later, the lawyer interviewed for a job; he was looking to move up in the world, and presented himself as a clean-cut, no-nonsense straight shooter. The potential employer took the man through every stage of the interview process, all the way to one final question.

After jumping through the myriad hoops of the interview process, the lawyer probably felt he had a great shot at being hired, until the potential employer said, “Well, I think we only have one question left; would you like to explain this?”

At which point they showed the lawyer a video of his actions at the comedy club. Someone at the company had been at the show, recorded the whole event on his cell phone, and realized it was the same person coming in for an interview later that week.

I should start filming all my sets.

Just think; I could have posted a clip of Cindy acting the fool, and made sure all her friends got the link.

(Bonus: sometimes my camera is running when there’s an idiot in the audience.)