You Confuse Me, Joe Webb 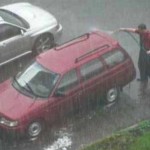 “If you had one shot or one opportunity to seize everything you wanted in one moment, would you capture it or just let it slip?”

Everyone knows Tom Brady’s story: fought to be named the starter in college, selected in the sixth round of the draft, #199 overall. Frustrated by repeatedly being passed over, he vowed to work hard; when his opportunity came, he wanted to prove everyone who ever doubted or rejected him, wrong. In 2001, starting quarterback Drew Bledsoe left the game with an injury and backup Tom Brady stepped in. Twelve years and Three Super Bowl victories later, his name is synonymous with success. Tom Brady has been a superstar for so long that mentioning him no longer evokes his Cinderella Story origins, but instead draws eye rolls and disgust; people are actually sick of seeing him in the playoffs and squeal with glee when he loses a Super Bowl.

On the flip side of success, there’s Joe Webb. As chance would have it, also a man selected not only in the sixth round of his draft year, but #199 overall. A neat coincidence, but that’s where the similarities end. When given his opportunity to be a hero to the state of Minnesota—starting against the Green Bay Packers in an important Wild Card game—he threw an exciting 11 for 30 and shockingly only one interception. (Given the number of times he tossed the ball straight up into the air when under pressure, the Packers should have grabbed more of them out of the sky.)

Sports pundits repeated ad nauseum before, during and after the game: “Webb didn’t really get any snaps during the season.” But that just leaves me wondering, Why wouldn’t he have conditioned on his own during his down time? If there is one constant heard all across the football spectrum when it comes to success, every article says, “Superstar Player is the first to arrive, and last to leave the training facility.” Rookies Russell Wilson (Seahawks) and Andrew Luck (Colts) have both been described in this manner.

Years and years ago, when I was just getting started in comedy, I drove from Milwaukee to Madison for my very first guest spot at the local comedy club. I had a ten-minute set I thought was killer, and was ready to unleash it upon the college town.

Upon arriving, I was told I could have 5 minutes of stage time.

I panicked. My set was ten minutes; how could I possibly edit that down?! I had meticulously prepared to the word, rigid.

That night, I bombed. I bombed because I was too worried about how I was going to rework everything on the spot instead of having backup material ready. Driving home, I vowed to become a Boy Scout, only without the odd mix of homoerotic carrying on and ironic gay bashing at the same time.  No, I would simply supplant their motto and make it my own: Be Prepared. Instead of being unyielding, I would be fluid. If I was told to prepare for 5 minutes, I would prepare for anywhere from one to ten minutes. If a curveball was thrown my way, I’d still be able to get on base no problem.

Over time, this has been a boon to my comedy career.

Several months after that night, my friend Mike and I drove to Chicago for a club audition; we had called in and been given 8 minute slots. When we got to the club, we were two of twenty-five comedians milling about. Club management quickly realized they were in over their head—25 comics x 8 minutes = a 3+ hour show—and cut everyone to three minutes.

Panic swept through the other performers like wildfire. A murmur sounded as everyone began asking one another, “How can I do three minutes? My set is eight minutes… There’s no way I can lop five minutes off that…” What surprised me was that many of these comics had been performing for much longer than I had; I recognized some of their names as being somewhat professional on the Chicago circuit. Mike and I exchanged a glance; we had discussed this scenario on the drive down, and were ready when the announcement came.

When my name was called, I walked up to the microphone, yanked a 3-minute set from the forefront of my mind, performed it, and got a decent amount of laughter. After the show, the owner complimented me on both my set and my professionalism; many of the other comics were running past their given mark. I had hit my time and said “Goodnight” with a wave to the audience, and the owner appreciated that.

Time runs in two directions in comedy; it’s not always about cutting your set. I practiced for longer opportunities, too. Even though I had never been given 20 or 30 minutes on stage, I wanted to make sure I could do it if called upon.

As if being rewarded for my studious ways, a moment to shine came before I ever expected it to. I was booked on a two-person show, one I would open with 10-12 minutes, and then introduce the headliner. This man would then perform his by-the-numbers act just as he had done for the past 20 years. As if never changing his routine was bad enough, the headliner was a prop-comic; every one of his jokes was tied to a “wacky” item he would pull out of a suitcase. Unfortunately for him (and the club), when he arrived the day of the first show, it was discovered the airline had misplaced his checked luggage. This was the bag carrying everything he needed to stand on a stage; without his crutches, he was lost. After several frantic phone calls, it was determined the airline found his bag, and it was in route. As soon as the plane landed, a courier would speed it to the club. Expected arrival time: 8:30pm.

Problem was, the show was supposed to start at 8pm.

It was a weeknight—the club ran Wednesday through Saturday—meaning patrons probably didn’t want to stay out too much past their bedtime; people had work to go to the next day and all.

The owner began to panic; “What are we going to do?!”

Not knowing any better, I said evenly: “Put me up.  Start the show at eight, and I will stay on stage until you give me the thumbs up.”

The owner stared at me, deer-in-headlights. I was an opener, supposedly someone with only 10 minutes in my back pocket. Could I be trusted?

After a few seconds of mental tennis—bouncing the twin ideas of putting me up or starting late back-and-forth—the owner figured I was better than an empty stage and angry audience, and the show started as scheduled.

Forty minutes later, a flashlight shone from the back of the room: “Suitcase is in hand! The headliner is ready!”

It was the longest set I’d done to date, and I was beyond happy with how well it had gone. There were no gaps in my set, and the audience response had been through the roof.

Preparation isn’t always about time, for the record.

One night, another comic and I were granted guest spots at a club in Milwaukee. Approaching us as the lights went down, the owner said, “Who’s going first, and who’s second?” Without skipping a beat, the other comic looked at me and said, “You take the shit slot,” meaning first, the cold audience.

Not skipping a beat herself, the owner looked at him and said, “If you’re funny, there is no shit slot,” and walked away.

I went up first, did well, and performed often at that club. The other comic always had difficulties getting booked.

That incident has repeated itself constantly since then, with one twist: when given the opportunity, I always volunteer to go first. Like an annoying student who always has the answer, my hand raises immediately. One prominent booking agent even looked at me and said, “You know, you don’t have to do this. We can draw straws.” I said I was fine with the slot, went up, did well, and was given work straight away following the show.

Given the football-history of people like Tom Brady—people who studied and practiced, studied and practiced—I don’t understand why Webb wouldn’t have prepared daily for his moment. Many athletes before him had set the “be prepared” precedent, and one of the oldest sayings I know is: “Success is when opportunity meets preparation.”

For proof, look no further than Colin Kaepernick.

Repeatedly passed over his whole football-life, he prepared. And when he got his opportunity? He kicked the crap out of the very same Green Bay Packers Webb was powerless against.