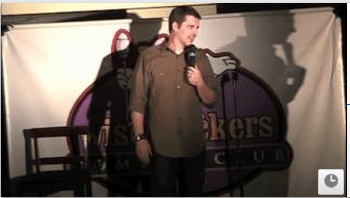 As a comedian, you have to deal with hecklers: people who want to be part of the show but are too cowardly to stand on stage and write material for themselves.

An audience member has only really bested me once. I was performing in Duluth, Minnesota, in the summer of 2012, and was ribbing the audience about being Vikings fans. In my line of work, there is little more fun than wading into enemy territory and stirring things up. As a Wisconsinite by birth and Packer fan by choice, I was having fun at their expense.

Until a random man shouted from the audience, “At least our governor isn’t a complete dumbfuck!”

The audience response was instantaneous, thunderous applause. Even I laughed uncontrollably. For a half-second I thought about responding with a slander against Michelle Bachmann, but as true a comparison as it would have been, it still would have been weak compared to the man’s challenge. Scott Walker is indeed a complete dumbfuck, and to even suggest otherwise would have exposed me to attacks of being politically ignorant and/or hating America.

Instead of fighting back, I nodded my head, smiled, and said “Touché, good sir. Touché.”

Dealing with a heckler can be an interesting line to walk; you have to make sure the audience is on your side the whole time or you risk losing control of everything. I learned this the hard way during one of my very first comedy club hosting gigs.

I was performing in a mid-size city, something larger than a town, but smaller than a metropolis. It was a place that purported being perfectly inline with Republican politics and Christian values, which means strip clubs lined the city limits and the back pages of the independent trade rags were littered with “massage” parlors ads and “escort” phone numbers.

The week before my gig, a good friend of mine was working the club, and asked if I wanted to ride up with him and check the room out. I did indeed, and we drove to the show in excited anticipation of laughter and good times.

The house lights went down, my friend took to the stage, and within seconds a woman in the audience began badgering him. There’s no way I could ever remember a single word she said, but she hammered my friend the entire time he was on stage, and then proceeded to harass the feature and headlining comedians. All the while, no action was taken by club management to quiet or remove her.

After the show—because apparently ruining his set wasn’t enough—the woman approached my friend and began poking him in the chest.

“I was funnier than you,” she said drunkenly. “They should put me on stage.”

She wasn’t exactly mean to him—there was nothing vicious in her voice—just drunkenly inappropriate. She was laughing, thinking she had somehow helped the show.

In the darkened room with all spotlights on the stage and an audience facing forward, I had been unable to get a bead on this woman during the performance. But now that she was in my friend’s face, I was stunned. The woman was just drop-down, jaw-dropping, cum-too-quick gorgeous. Model beautiful. Post-airbrushing Playboy-Magazine stunning.

I figured she had lived a life of being catered to, and because every man probably wanted to fuck her, no one had told her to fuck off.

I memorized her face and made a vow: if by some dumb luck she came to one of my shows, I wouldn’t take any ill treatment at her hands. If challenged, I would shut her up good.

What happened next should be all too obvious.

The next week arrived, and as lights darkened and a voice boomed, “Please welcome to the stage, your host, Nathan Timmel…” I saw her sitting in the audience. She was dead center of the stage, two tables deep and easily seen in the remaining fade of light from the stage into the audience.

Well, it was happening, and I was prepared. I had spent all week thinking of a few comebacks I could hit her with if challenged.

I began my set, and I think I may have gotten a laugh or two, but somewhere in the early three minutes of my routine it happened. There’s no way I could tell you what she said but she piped up and interrupted me with a uselessly asinine comment.

My opportunity was at hand, and I leapt immediately.

“Why are you even opening your mouth?” I asked with a sneer. “Shouldn’t you just be happy you’re getting a show out of the evening? Don’t you usually just get rented and taken straight to a hotel room?”

Her jaw went immediately agape, and I smirked in victory.

I stood, pausing for the adulation about to be bestowed upon me by the audience, their approval assuredly imminent because I had vanquished the evil heckling woman…

…and crickets reached my ears.

Looking over the audience, I saw stunned faces.  “Well that was uncalled for,” each said wordlessly.

Within a millisecond I realized my mistake: I had jumped on her too quickly and too harshly. This audience hadn’t seen her derail the previous week’s show; they just saw her make one comment and get called a whore in response.

I lost the general population at that very moment, and never really won them over after that. The woman was, however, quite quiet for the rest of the show. I may not have had a good set, but I did throw myself on the grenade and allowed the other two comics to shine, even if they (and the audience who now hated me) didn’t realize it.

If this story ended there, I wouldn’t be typing it up right now. In life, many tales need a “truth-is-stranger-than-fiction” ending to make them worthwhile, and hopefully that’s what this has.

After the show, I was milling about in the lobby, sort of standing in a corner trying my best to go un-noticed. If there’s one thing no performer needs after a less-than-stellar set, it’s either judgmental or pitying eyes.

I was minding my own business, when of all people the beautiful woman and a friend walked by me, pausing to light a cigarette or some other action that would cause them a delay in their stride. Her back to me, the gorgeous heckler spoke in a very angry voice and complained to her friend, “This night has been complete bullshit. Worst night of my whole life. The comedian makes fun of my job, and the cop that put me in jail for it was sitting two tables away. I just want to go home.”

It was almost a perfect moment.

The only thing that would have made it better is if in the moment she realized she had been bested, she had said to me:

This picture is a link to me dealing with a drunk woman.  Go ahead, click it. You know you want to.