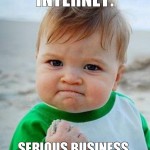 I remember the only time I’ve seen a person sob uncontrollably in a comedy showroom.

I was opening for another comic at a dive club in the basement of a strip joint. The owners made so much money on the exotic dancers, they needed a way to write off some of the income and receive tax breaks. Adding a comedy club under their floorboards was a genius move in obtaining that goal.

Now, I have no problem with strip clubs. I don’t particularly like them, because the idea of paying someone to make me horny without finishing the job is absurd, but I don’t have any problem with them. That said, I understand your average Joe isn’t taking a date to a comedy club that resides within the walls of a building wearing the neon sign “All Nude” above it. Such advertising doesn’t particularly scream “classy.” So, at this particular location, instead of upscale audiences, you’d tell jokes in front of twenty members of the white trash variety, their baseball hats sideways and their best wife-beater T-Shirt chosen for the evening.

For reasons beyond all logic, on the night being discussed, a bachelorette party showed up. Of the twelve-person audience that night, they comprised eight members.

(See how the tax write-off worked?  “We have a 250 seat showroom, and only sold twelve tickets; business is horrible!” *counts thousands of dollars profit from upstairs business.* But I digress.)

It was Saturday night, meaning I’d already seen the other comic’s act several times, and though I liked him and found most of his set funny, there was one jarring moment within it all that didn’t make sense to me: a joke about the act of rape.

I’m no prude; I have heard jokes involving the subject of rape that made me laugh hysterically, the thought “Goddammit, I wish I had thought of that” permeating my mind. But in this case, it just wasn’t funny. Maybe a little “in poor taste” not funny, but mostly, just “not funny,” not funny. I don’t remember the specifics of the joke; I just remember being confused as to why anyone would want to say the words he did, and say them into an amplified sound system in front of people no less.

So, that Saturday I was watching the show—if it could even be called that with twelve people in the room—when a minor commotion started taking place at the bachelorette table; all the women from the wings started standing and rushing to the center of the group. From my vantage point, I couldn’t tell what was happening; was there a medical emergency? Why was everyone so panicked?

I quietly re-positioned myself to get a better look, and from my new location could see the bride-to-be crying; tears ran down her once-smiling face. It turns out she—I was informed by one of the bridesmaids after the show—had the horrific occurrence of rape in her past. No details were given (nor were they asked for), so I don’t know if it was a violent attack or the appalling act of date rape, but when the comic made his rape joke she burst into tears. A memory involving the most awful of violations had jumped to the forefront of her mind as if delivered by lightning bolt.

I felt a mix of heartbreak and confusion; probably a 90/10 split. The larger portion of my emotion involved empathy for her pain. In no way could I imagine what it would be like to survive such an experience, much less be in the middle of a celebration with your best friends and have the memory slammed into you unexpectedly. A niggling little 10% of my mind, however, focused on two questions: why had a group of women entered into a house of feminine degradation in the first place, and had they done any research on the evening’s comedian?

The city I was in had three comedy clubs at the time, not a single one “too far” to get to. A simple YouTube search of the comedians performing at each location would have given them the precious information they needed to make an informed decision; “This guy seems raunchy, let’s avoid him. This one is in the basement of a strip club, let’s not go there. Hey, this one looks nice; this comedian seems funny, let’s go here!” Even if the specific harm-causing joke wasn’t available for viewing, a sense of what’s to come could have been gleaned by what was available.

Some people will say it was the comedian’s fault for joking about rape, as it should be a verboten subject. Unfortunately, that argument attaches itself to the concept of censorship; once you start down the path of what’s fair game and what’s off limits, you’re fucked. Everyone finds fault with something. Everyone.

I know, because I have spoken with the most absurd of people after my shows. A woman told me I needed to drop a joke involving my cats, because “It just doesn’t work.”  Really? So, the 99% of the crowd that laughed was wrong?  A gay man called me an asshole and gave me the finger because of a joke about wanting my baby to come out gay. A vegan acted obtuse and insulted (as vegans are wont to do) when I made a joke about Goodwill Industries. I even had someone yell “Prisoners are people too!” and storm out of a club after I suggested we keep Army engineers safe by having incarcerated people search for landmines in Afghanistan. If people are going to be upset by these innocuous subjects, then the categories involving what’s proper and what’s improper disappear immediately.

The reason all this is on my mind, naturally, is because of a story involving comedian Daniel Tosh. What really happened is unknown; as it is not on film, there are conflicting stories of the evening. The abstract version is: he was on stage, the subject of rape came up, a woman in the audience heckled her affront, and Tosh slammed her with a rape-themed comeback.

People immediately went into reactionary mode on both sides of the aisle; pro and anti-Tosh, and pro and anti “the topic of rape” as a comedy subject. Bloggers quickly blogged emotionally charged yet factually-lacking pieces, and others re-posted those words with an emphatic “YES!” written next to it.

(There is no better validation than Internet validation, after all.)

What no one seemed ask was: Why did the woman at the Tosh show open her mouth in the first place? Regardless of whether or not what he said to/about her was appropriate, funny, disgusting, or awful, the simple fact of the matter is: she instigated it.

If she didn’t like what was happening on stage, she had myriad outlets she could have vented her frustrations upon. She could have: Complained to management, gone home and posted on Facebook or Twitter how funny she thought Tosh wasn’t, or, as she eventually did, blogged about it. Those would have been entirely fair responses, and she would have been allowed that voice. If she didn’t like what Tosh was saying, she had (and still has) every right to go to an open microphone and stand on stage herself and give her thoughts on the subject.

Instead, she opened her pie hole wide while in the presence of a comic and let her thoughts be known. Some people have championed her self-righteous attitude because she “stood up for what she believed in,” but that is very hollow chest pounding. While I personally find the ideas of both the American Nazi Party and Ku Klux Klan abhorrent, I’m not marching into one of their meeting halls to pick a fight.

It bothers me that people think it’s OK to heckle comedians. If you don’t like a movie, you don’t yell at the screen—insert your own black joke here if you want to—and you definitely don’t heckle the actors in a play. No one likes it when Ebenezer Scrooge denies Bob Cratchit a raise in A Christmas Carol, but does anyone yell out, “Poverty is never funny!”

But at a comedy club, if someone is so inclined, it’s near-accepted that they can bleat their unwarranted, unwanted and unnecessary feedback to their hearts content. And, in this case, for some reason people think it’s fine-and-dandy to whine about it after coming up on the short end of the quick-wit stick.

Technology is, in part, to blame for blurring the line between appropriate and not. Because we all have Facebook statuses that get “liked,” because we can consistently and constantly shout over others on line without absorbing what they have to say, we think our opinion always matters. Maybe opinions do matter, but they do so best within specific parameters. This blog contains my thoughts and opinions; I didn’t make you read it, and you are more than welcome to leave your thoughts at the end of it. The flip side is, no one forced that woman to sit in the comedy club that night, and no one forced her to yell out when the spotlight wasn’t on her and the microphone not in her hand.

There is a trick to the human psyche that allows us to become defensive when attacked, and empathetic when witnessing sorrow. Shocking, I know, but people seem to forget this daily. Compare and contrast the two situations I’ve presented: in the first instance, a joke involving rape was made, and it disrupted the show due to tears and concerned friends. In the second, the mere subject of rape was mentioned, a woman became indignant and uppity, shouted out, got shamed, and felt the need to act petulant about it afterward.

Will the comedian from the first scenario tell the joke again? I don’t know. I would suppose it depends on his character, or moral fiber. I personally didn’t find the joke funny, and will forever remember the sight of the woman shaking with pain, her friends consoling her the best they could. No anger was thrown around, just a desire to remove their friend from the situation as quickly as possible. When given time to reflect, the comedian hopefully learned to create his jokes more meaningfully. I know that just witnessing it made me ever more careful in my joke construction.

In the second situation, with indignation being the driving emotion, the comedian will probably double down and self-justify his actions. Tosh will probably make the event into a part of his act, as it is easy to dismiss someone when they’re being an asshole, and the woman in that case was absolutely an asshole.

Yes, rape is a super-charged subject, but having stage-experience under my belt, I can repeat myself by saying: someone will always be offended by something.

If you are easily offended, there is a comedian on NBC five times a week following your local news. Stay home and watch him.

The only offense he commits is to the art of funny.