The Eventual Passing of a Four-Legged Family Member 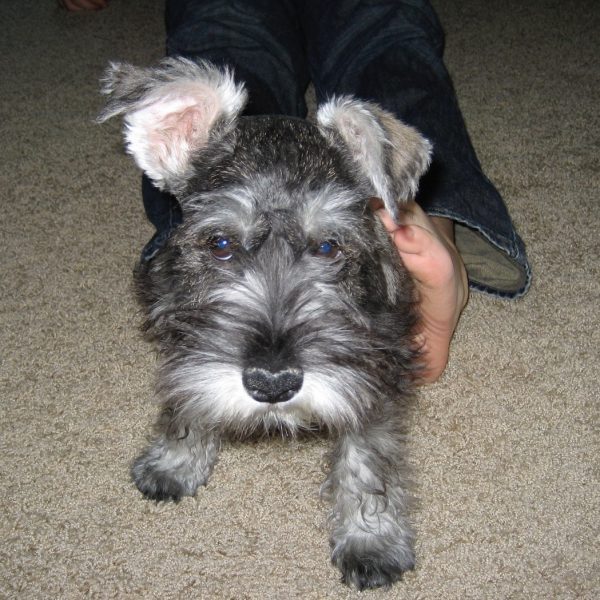 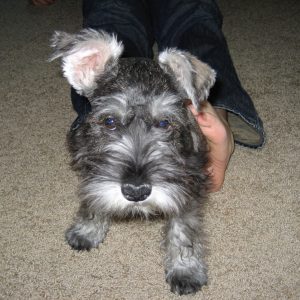 Humans are at least tangentially aware that any given day could be their last. Car accidents, nasty spills… something can always do us in. But dogs? Of course my dog isn’t aware of his own mortality. He’s a dog. One that’s lived a pretty good life. Up until now.

My dog, a Mini-Schnauzer named Kitty, was recently diagnosed with Type 1 Diabetes.

The good news is: we caught it early. He started drinking a ton of water and asking to go out and pee multiple times overnight, an absolute rarity for him, so my wife took him to the Emergency Vet while I was out of town.

Being the lovely worry-wart that she is, she had Googled his “constantly-peeing” symptom. As it always does, Google gave back worst-case scenarios. “He’ll be dead by morning!” was a common theme.

The vet was concerned, but less so than Google. Apparently a blood-sugar level between 100-150 is ideal for dogs; Kitty’s was over 500. Bad, but not horrible. Some people didn’t bring their pets in until the glucose level was over 1,000 and ketoacidosis in full swing. So we were (thankfully) ahead of the curve.

We have to give him insulin shots twice a day for the rest of his life, a life that will be abridged by the diabetes. Whatever future we had planned with him just got cut short.

In a few months, Kitty will get cataracts, and eventually go blind. Which makes me sad, because he won’t know what’s happening to him. Over time, he’ll go from seeing everyone smiling at him, to only being able to hear and smell us. I can’t imagine that will be anything but confusing, and possibly frightening, to him.

Our eye contact will end, which is something I enjoy.

I always wonder… I never know, but I always wonder what’s going on inside that doggie noggin of his. The way he stares at me with his brown, empathetic eyes suggests he’s thinking thoughts I’ll never understand.

Shit, for all I know all he’s ever had are the twin thoughts: “Pet me now?” and “Feed me now?” Because I want to project human thoughts and emotions onto him, I feel like there’s so much more going on in there. It makes me wish I could explain to him what he’s going through.

We have a couple more years (knock on wood) of creating memories with him; moments that will be added to those already residing within my gray matter. Moments like him as a puppy, chewing on my toes happily, or him meeting a bullfrog and being alarmed every time it would hop. Memories of him and our now-departed cat, Pandora, who was queen of our house and would hiss and swat Kitty out of her way whenever he got too close. This despite the fact he was double her size.

My wife remembers first bringing him home; Kitty was the last of his litter to go. 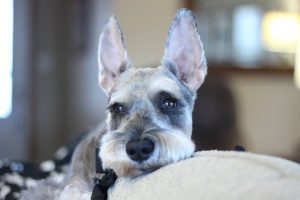 He was so nervous that he cried in the car, so she put her hand up to the doggie crate and he licked at her hand. “I’m scared; please like and take care of me” was all he wanted. It’s still all he wants.

Kitty used to follow us around the house; he never wanted to be abandoned. If we’d leave the room, he’d hop down and be underfoot immediately. When we’d go into the basement, he’d sit at the top of the stairs and whimper. He was too little to navigate said stairs, and he didn’t trust that we were only going to be away for a few seconds. We’d hear the whines, turn around, and pick him up and carry him down with us. Once at the bottom, we’d set him on the floor and he’d happily follow us to and fro, hither and dither. When it was time to head back up to the main level, he’d climb the stairs in a clumsy, effortful manner. This elicited a combination of smiles, laughter, and encouragement from us.

As he’s aged and begun to understand the layout of our house, he now watches us as we meander about. If we go to a bedroom, he arches an eyebrow, but doesn’t really move. He knows there’s no escape from that end of the house. But if we walk toward the garage door, his whole head lifts and his ears perk. If we actually reach for the doorknob? Then he’s off his perch and at our side; “Can I come, too? Can I come, too?”

Oh, and his perch? That’s on the back of the couch. Neither the Mrs. nor I are much in the way of disciplinarians. When he was a puppy, we might have lazily tried once or twice to keep him off furniture, but I doubt it. He was a member of the family from the get-go. If he wanted to sleep on the back of the couch, well, that was his right. After he’s gone, the misshapen pillows he leaves behind will probably make me tear up.

I’ll be spending more time on that couch over the next few years.

With him going out more at night, it’s just easier for me to sleep there and jump up and let him out than to go back and forth from the bedroom. In a nice gesture of love and loyalty, he sleeps out there with me. After his first pee break, he’ll generally come in and head to the bed. After a few seconds, however, he realizes I haven’t followed him and returns to the living room in search of me. I’ll be on the couch, so he’ll cock his head to the side, then figure out we’re not going to disturb Mommy by climbing in and out of bed incessantly, and hop up and settle in.

My favorite two memories of Kitty involve the grocery store. Because of his fear of missing out, he always bee-lines for the door whenever we leave. If we’re making a quick run somewhere, we take him with. If the trip involves a visit to the grocery store, well, then he’s going to be in the car, alone, for a couple minutes.

As a pup, he figured out how to honk a car horn.If we parked facing the store, he would jump into the driver’s seat, put his front two paws up on the horn, and either bounce on it in order to send a staccato of toots across the parking lot, or just lay into it and send one long, drawn-out never-ending beeeeeeeeeeeep. 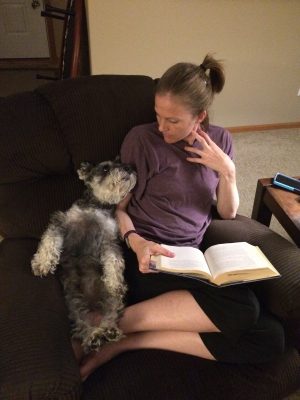 The first time it happened, after completing my traversing around the store, I made my way to the checkout line. You could hear the horn quite clearly, and everyone entering was laughing, as were the checkout clerks. As I placed my items on the conveyor belt, the clerk explained with a smile, “A little dog is honking that horn.”

I nodded thoughtfully; I knew all too well.

(After that, we made sure the car was facing away from the store, putting an end to Kitty’s noise pollution.)

The other grocery store memory is of him barking after seeing me exit the store. I was making my way back to the car, and he was excitedly awaiting my return. As I am prone to do, I started giving him the finger as I crossed the parking lot. Don’t ask me why; it’s just one of those things I do. Giving the finger to your pets is almost as fun as sneezing on them. Give both a try, if you haven’t.

Anyway, what I didn’t know is that an elderly woman was watching me. As I got close to my vehicle, she got out of her car and good-naturedly tossed my way: “Do you think he even knows what that means?”

“Well,” I responded as thoughtfully as possible. “Given how often I do it to him, I bet he thinks it’s a sign of affection.”

The elderly woman laughed, and went on her way. I got into my car and started scratching his ears, asking, “Who’s a bad dog? You are? Barky bad dog!”

(I cannot tell him he’s a good dog; it’d go straight to his head.)

Knowing Kitty is on borrowed time isn’t fun; it’s quite sad. But I’m actually grateful to have such a (hashtag) first world problem.

I live in a country where medical care for animals is available. I have the opportunity to give Kitty insulin shots twice a day for the rest of his life. That’s a million times better than being forced to watch him wither and die.

And on that note, when it all becomes too much for him, we’ll be able to have him put down gently and humanely. How many people out there suffering from debilitating diseases wish they had that option?

We’ve already primed the kiddos; they know he’s sick, and won’t be with us forever. It is nice, in a bizarre way, having a loosely-based time stamp on his life. It reminds us to appreciate him while he’s still here.

Even if he’ll be gone all too soon.

Want to read another story from Kitty’s life? Click the pic below. 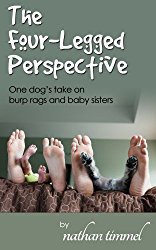