We Raised Our Kids to be Gender Neutral. It Lasted Five Minutes. 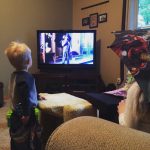 Boys will be boys.

That phrase has negative connotations today, because people think it’s an excuse to let boys molest, rape, or be obnoxious.

The thing is, it can also be an innocuous phrase about boys being boys.

My better half and I have two children—one boy and one girl. These kiddos came to be via the wonders of modern science; in vitro fertilization, to be specific. My wife’s eggs were scrambled, or poached, or something like that (“What am I, a doctor?”), and my spermies are less Michael Phelps and more Robel Kiros Habte.

(Did I Google “Who finished dead last in swimming in the 2016 Olympics?” You know it.)

Because pregnancy wasn’t a surprise to us—there was no peeing on a stick and crossing our fingers—we decided to keep the gender of our child a surprise. Since every other aspect of the pregnancy was filled with certainty, we wanted this one wee bit of unknown to be a part of our lives.

We painted the nursery in a gender-neutral green, and bought neither “Princess” nor “Superman” onesies.

My wife and I didn’t discuss at length how we were going to handle gender, but we did agree that stereotypes weren’t part of our agenda.

The first baby out was a girl.

After she was born, we dressed her any which way we wanted, all in accordance of our gender-neutral decree. She wore clothes with an assortment of logos from Batman to Batgirl, and from Football to one with the thrash metal band Slayer on it.

She also played with whatever toys we gave her. Trucks, Hot Wheels, stuffed animals? All were equally acceptable.

Then, one day when she was around two-and-a-half, she discovered two things: the color pink, and Barbie dolls. From that instant forward, there was no going back.

She. Was. Obsessed. And we were fine with that.

We didn’t try to steer her away from dolls or back toward a gender-neutral color; we shrugged and said, “I guess this is what she likes now.”

The exact same scenario played out with our son.

He grew up wearing “Daddy’s Little Princess” pajamas and sparkly pink shirts, because those hand-me-downs were in great shape and we didn’t care about gender-driven content.

The first day he saw a truck, and discovered dinosaurs? It was like Private Hudson in Aliens: “Game over, man! Game over!”

Now, does my daughter like trucks and dinosaurs? Absolutely she does. She “likes” many things. But she loooooooves American Girl dolls. They’re crack to her.

Does my son play with his sister’s Barbie Dream House? Yup. But give him a dinosaur and he loses his little mind with joy.

They were each allowed to play with whatever they want to, and they drifted to what they liked.

I’ve read stories about the “theybie generation,” where non-gender roles are foisted upon kids even after they express interest in certain things.

To me, that’s silly.

A parent that doesn’t buy dolls for a daughter that wants them is equally as awful as a parent that says, “Boys play football, and girls are mommies.”

You’re still instilling your desires into a kid, and the more time you obsess over what your kid should and shouldn’t be, the more they’ll probably (and hopefully) push back against you.

We’re raising our kids to be good people, and that’s it; we’re not going to “correct” them when they play with “stereotypically gender specific” toys.

I would never say, “No, no, sweetie, you don’t have to play with Barbies, you can play with dinosaurs” to my daughter, or “Why don’t you wear a pink dress today?” to my son. They can pick and choose what they like, and I’m fine with wherever those cards fall.

Which means should my daughter suddenly take up an affectation for monster trucks? Yeah, I’m not going to push her back at Barbie. If my son turns on a dime and one day says, “Daddy, I like pink glitter unicorns,” then more power to him.

We’re also going to tell both our kids they can be whatever they want to be in life.

The most important thing a parent can do is love their child, no matter what.

Even if that means boys will be boys, and girls will be girls.