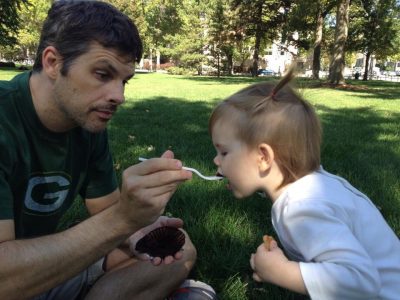 My daughter is five years old.

She’s always been a picky eater, and I don’t mean that in the classic sense where every parent says it about their kiddo. Most children are “picky;” my child has been to an eating specialist several times.

My daughter balks at children’s staples, be it hot dogs or mac & cheese. The day she finally tried pizza—which wasn’t all too long ago, mind you—was a near-miracle. She’d turned up her nose at it so many times that we’d just about stopped trying, when of all things her brother (age two-and-a-half at the time) showed some interest in a bread-and-sauce cheese triangle. Once he decided pizza was delicious, she gave it a hesitant try and ended up liking it.

(And yet we still can’t convince her to try other things using that “Just try it!” teachable moment. *slams head against desk*)

Which is why the following memory is burned into my noggin.

I can remember, clear as if it were yesterday, a moment from September, 2013. My daughter was thirteen months old, having just crossed the one-year mark a month earlier. It was a beautiful day—blue sky, warm temperature, all that jazz—so I decided to surprise my wife at work with our daughter.

(I was on Daddy Day Care duty at the time; since my work takes place on the weekend, I kept the wee-one home with me every Monday and Tuesday so we could get to know one another: “Me Daddy. You wittle baby.” You know, bonding.)

We showed up, unannounced, to my wife’s office—surprise—and the three of us went out for lunch. I’ve no clue where we ate, but I’m guessing we brought goldfish and milk for the stubborn one.

(At thirteen months my daughter was already a willful little snot when it came to food.)

Considering it was a nice day, after lunch we stopped at the specialty cupcake place and ordered up some fattening delights to go. We carried our sugary treats over to the grassy open area by my wife’s office and sat down for a little dessert-picnic.

Our daughter wandered to and fro, hither and dither, doing what toddlers do in chase of birds, squirrels, and other animals that remained forever out of reach.

And then the cupcake boxes were opened.

Now, it is important to point out at this juncture that our daughter had never seen a cupcake before. She was thirteen months old, and you generally don’t feed a toddler junk food.

The instant, and I mean the very absolute instant the cupcakes came out of their box, our food-belligerent, fussy, won’t-eat-anything daughter marched right up to me and opened her mouth. She leaned in, looking not unlike a baby bird looking to have something regurgitated into it.

Not only had she never seen a cupcake and yet somehow knew she wanted it, she had never shown interest in food before. Everything we fed her she ate begrudgingly at best, and forced at worse; suspicion toward food was in her DNA. But here she was, mouth open, body forward, actively wanting to try a new food, demanding I share my treat with her.

Which, of course, I did. I fed her little bites, and every time she’d swallow her mouth would open again: more. More, more, more.

The girl who wouldn’t give anything a chance was addicted.

It’s been four years, and her love of cupcakes hasn’t waned one bit.

wanna read more about my little baby daughter pants? buy the book I wrote to her…