How Guilt Made Me a Better Father 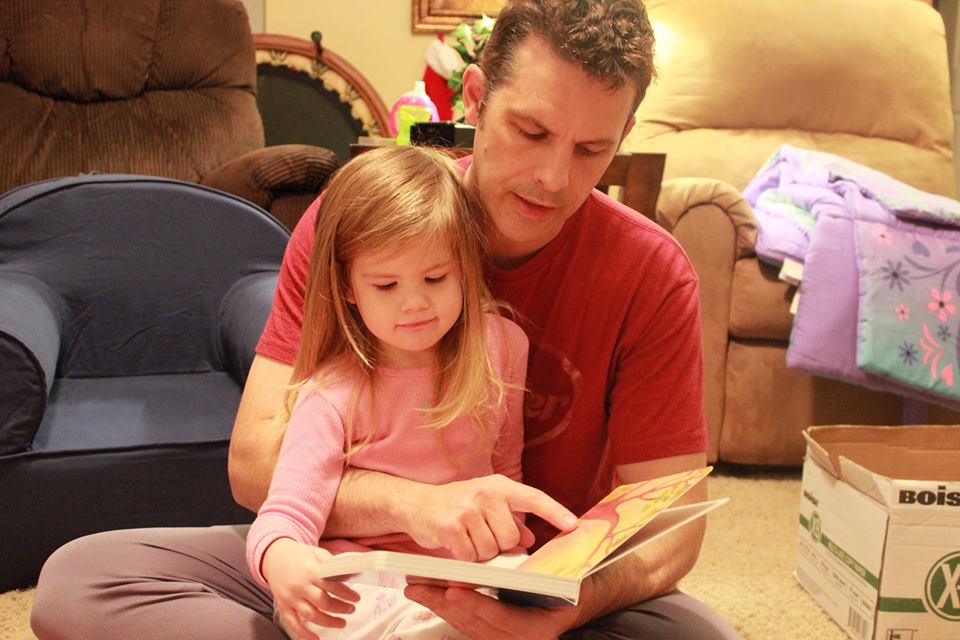 On Monday, my three-and-a-half-year-old daughter stayed home from daycare.

She wasn’t technically sick, but you can’t go in within 24-hours of having a fever over 101 degrees, and on Sunday she peaked at 102. She had actually carrying the fever for five days by then, so we made an appointment with her pediatrician to make sure we weren’t dealing with an infection or anything worse.

Our morning started with a trip to the craft store for Mommy. As we drove, we listened to “Airplane Song”—Upside Down & Inside Out—by “Color Band”—OK Go—on repeat. Like most children, my daughter fixates on one thing she loves and beats it to death. In our travels, we have probably listened to Hello! from The Book of Mormon 4,657 times, and Timebomb by the Royal Crescent Mob 2,812 times. Since it’s not Bieber or anything awful, the repetition doesn’t bother me as much as it could.

At the craft store, my wee one discovered a sparkly hula hoop and her eyes grew wide. It was only $5, so I figured “Why not?” Little things make little ones quite happy, after all.

From there, it was to the Doctor, where we sat and colored in the waiting room, and then sat and colored in the doctor’s office. The Doctor looked at her ears, eyes, nose and throat, ultimately giving her a thumbs up, but warning, “If she goes above 101 again, give us a call…” People who promote wellness grow suspicious of fevers lasting as long as my daughter’s had.

(She was down to 99 degrees, according to the nurse.)

Being a man who believes in bribery, I had made a pre-visit offer: “Do well at the doctor, and we can stop at the cupcake store on the way home.”

Ah, yes. The cupcake place. How could I have been so dense?

Once home, we ate lunch, then watched episode of “Abby School.” That’s what she calls Sesame Street. She’s fixating on role models, and is drawn to characters matching her gender as opposed to “Ew, boys.” Abby’s School may only be one segment on Sesame Street, but in her mind it is the sole reason for tuning in.

(Side note: I’d like to give a big middle finger to PBS for cutting the show from 60 to 30 minutes. Fortunately, the wife-unit and I were able to snag a couple full-length episodes from HBO when they offered a free weekend. Thank you munificent HBO overlords).

Then, it was nap time. Which is like Hammer time, only with more napping and less parachute pants.

I was exhausted, and ready for a little respite from the action. My daughter had other ideas.

“Read me a book!” she shouted gleefully.

A simple request, yes. But as said, I was tired.

“Just go to sleep, sweetie,” I sighed, attempting to exit the room.

In a span of .035 seconds, my daughter went into full meltdown mode. I had missed her nap window by about 15 minutes, and sometimes that’s all it takes. She began sobbing and crying as if I had just told her of her third-world style pre-arranged marriage to a 50-year-old goat herder.

“Read me a book…” she cried, punctuating each word with a sob.

I grew slightly exasperated, informing her while rubbing my eyes, “We read books at bedtime, not naptime.”

Her howls increased; her tears flowed like Victoria Falls.

There was flailing, me explaining that crying does not mean you get your way…

…but after 5 minutes, I relented. It wasn’t worth it, the battle of wills, the listening to her moan despondently.

I climbed into bed, and she snuggled up against me, her tears slowing as she struggled to catch her breath.

After I finished reading, I kissed her on the forehead and was halfway out of the door when she spoke up again. The timing couldn’t have been more perfect; it was as if she had timed it under direction for a play or movie, something done for maximum effect when tugging heartstrings.

As I was about to close the door, she choked out a call one last time:  “Daddy?”

“Thank you for reading the book.”

And with that, she rolled over and closed her eyes.

Why had I let her meltdown, allowing her to cry and lose control of her emotions instead of just reading the book in the first place? Was I trying to be a firm-hand parent? Saying no for the sake of no, so she would learn she doesn’t always get her way or what she wants? I don’t know, but I felt awful the entire time she slept.

There are battles you face with your kids, such as no, you can’t watch whatever you want, no you can’t eat whatever you want, and yes there is a set bedtime. But “no books before nap” is a pretty stupid thing to say, and an even stupider thing to attempt to enforce. Even if I was exhausted, the five minutes it took to snuggle and read meant everything to her. Why I had attempted to deny that for even a moment is beyond me. There is no harm in reading a book while snuggling, and it is best to capitulate to positive requests than be stoic.

Hopefully, I made everything up to her after her nap. That’s when I gleefully accepted her request to show her how to work her new hula hoop.

“Daddy is silly!” she informed me as I floundered.

Because Daddy is uncoordinated.