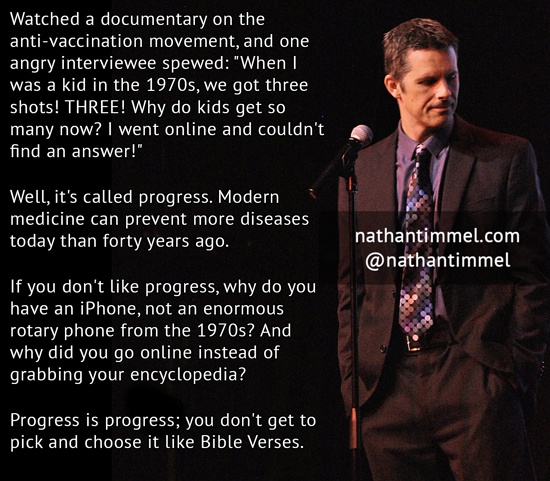 After my rebuke of the anti-vaccination movement, I had someone ask—and I paraphrase: “If something happened to your child because of a vaccination, would you remain so belligerent? Calling names doesn’t help anyone.”

To the latter, true, calling names doesn’t help. But that’s what happens when all other alternatives have been exhausted. When reason, logic, facts, and rational discussion fail, what’s left? When people have shown an absolute unwillingness to remove their blinders, mocking is all that remains. It’s why The Daily Show exists as a counter to Fox News.

I would be suicidal if something happened to my child, be it from vaccination or otherwise. But if I’m being honest—and I always am—my anger toward the anti-vaccination movement stems from the place most anger comes from: fear.

Because of the anti-vaccination movement, I fear vaccinating my children.

Not in the long run, thankfully; I get my kids vaccinated. But I do worry, “What if my kid is the one-in-a-million where something goes wrong?”

And that’s the beauty with the anti-vaccination movement: all it has is fear. It doesn’t have logic, reason, or anything that cannot be explained away. Trust me, I’ve heard (and had) all the arguments.

A 500,000 child, multi-year study in Denmark says: It doesn’t matter if you got the MMR shot or not, autism rates on both sides of the needle were exactly the same.

It’s called progress. Medical science can prevent more diseases today than in the 1970s. Would you bitch and moan if someday they were able to prevent cancer with a vaccination?

(Obviously that comment inspired my meme. Also: the HPV vaccine is wonderfully effective against cervical cancer, and guess what? Really smart people like Michelle Bachmann speak out against it.)

“Why do we still get Polio vaccinations?”

The same reason we get measles shots. Even though it was considered eliminated in the U.S.A., it’s still on the fucking planet, and planes exist.

“They keep extra cash on hand for settlements!”

Name an industry that doesn’t. We’re a litigious society, and unfortunately that means payouts happen even when undeserved.

“Some doctors are against vaccinations!”

Yes, discredited ones. The “doctors” I’ve found against vaccinations were either taking money from an organization filing an autism lawsuit against big pharma, or selling $75 healing crystals and peddling other such snake oil.

“Wait, big pharma! You telling me they have my best interest at heart?”

No. They want money. And the best way to make money is to have an effective product.

And so on. The argument never ends, “It’s like your Aunt Edna’s ass. It goes on forever and it’s just as frightening.”

The difference between actual anti-vaxxers and me is: I search out information through accredited sources. Doctors. Scientists. Well-researched documentaries. I don’t scour the Internet for conspiracy blogs. When I have worries, I speak directly with my daughter’s pediatrician, and he assuages my fears kindly and competently.

(And probably rolls his eyes and feels like patting me on the head while giving me a lollypop.)

Unfortunately, with anti-intellectualism all the craze in America, being a doctor doesn’t mean what it used to.

I watched a report on the anti-vaccination movement, one that showcased a woman who said, “After receiving a flu shot, I could only walk backwards.” When it broke, her story went viral on YouTube; especially compelling was footage of her gimping about as she “attempted” to walk normally. The video added fuel to an already well-stoked fire, because fear is contagious and it allowed crazies to pretend nonsense is the same as scientific research.

Naturally, the woman’s story was a lie and was proven as such, but people continue to lap it up and share the original video. Sensationalism always racks up more attention than retraction, and, from the report I saw: “People would believe something they saw on YouTube before they did an actual doctor.”

Read that again: “People would believe something they saw on YouTube before they did an actual doctor.”

There has to be a “Some” in front of the word “People,” or society is still fucked.