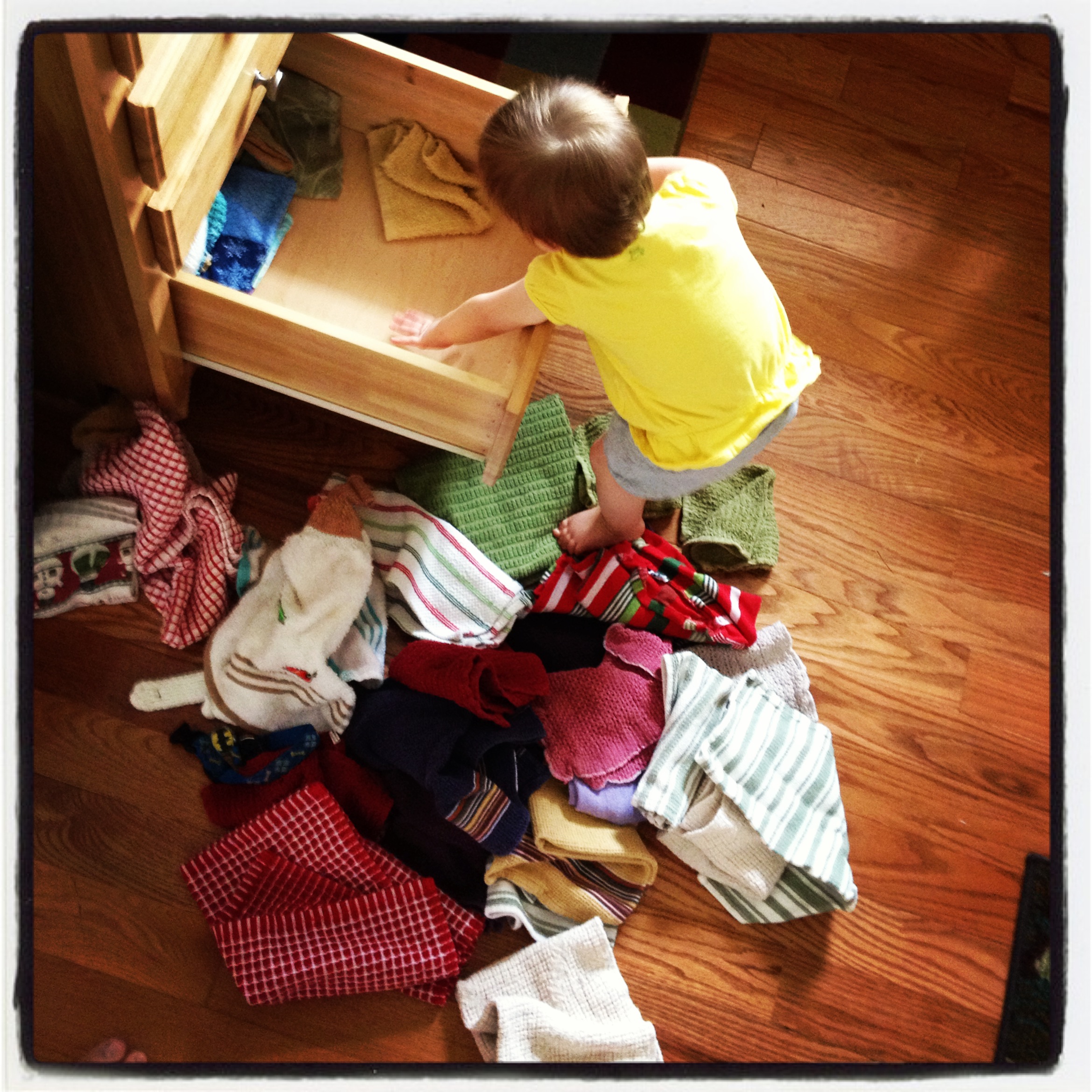 My whole life, I’ve watched parents swat at their children’s hands in stores. 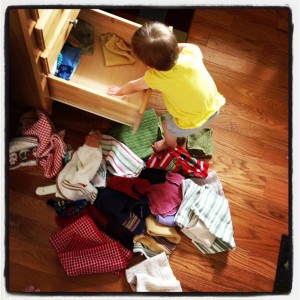 The action is usually accompanied by the words “Don’t touch,” which come out in the most unusual combination of whisper and shout; hushed yet somehow still roared. Sometimes the children whimper or cry, sometimes they just look defeated. The adults, they are alternately embarrassed and irritated. “What if someone saw me allowing my child to grab an item? They’ll think I’m a bad parent!”

On occasion, the swat is followed by a yank of the arm; “Come with me, now!” said via physical intent, not verbal interaction.

It’s always made me cringe.

Oddly enough, I never played any “What if?” games in those moments. I never put myself in the position of the parent, and thought, “I’d certainly react differently” or “What would I do in that situation?”

My Hillary is officially a toddler now—fifteen-months strong and interested in walking everywhere and grabbing everything. When we go to the store, she’s more interested in exploring than sitting in the cart.

So what do we do?

Hilly walks where she can, and tries to pick up everything. Sometimes she fails—as with bags of flour—sometimes she succeeds. When Hilly has discovered an item she can lift, one of two things happens: she either carries that item around the store with her, or she begins taking multiple amounts of said item off the shelf and setting them on the floor next to her. It is then my job to pick each item up and place it back where it goes, so she can repeat the process and believe we are having “fun.” Because it is fun. To her. And that, in turn, makes it fun to me. Shopping isn’t really fun for anyone, so if Hilly can make it interesting for us, hell, more power to her.

If we make it through our shopping experience with her item still in hand, I’ll swap it out with something we’re actually purchasing; “Good trade,” as Wind in his Hair might say. We then return the un-needed item to its place on the shelf, because that’s what happens when playtime is over: toys get put away.

Hilly doesn’t get to play with everything; of course certain items are off limits. We’re not going to toss eggs or anything else fragile around. But instead of swatting and yanking, I monitor my body response carefully. I generally pick Hilly up and start making faces at her. She understands “No,” so I exaggerate it mightily, shaking my head as I smile “Noooooooo” to her. It’s my way of letting her know she’s not going to get to play with everything she wants, while maintaining that just because she doesn’t get her way doesn’t mean it’s all bad.

At Target the other day, the two of us ended up in the vitamin aisle. Hilly’s eye spied small items; something easily grasped by her tiny hands and limited dexterity.

Immediately she began picking up the pill bottles.

Ever the helpful father, I showed her that if she shook them, they made a neat rattling sound. This made her grin ear-to-ear. Hilly began experimenting with a multitude of containers; each one picked up, shaken, and then either handed to me or placed on the floor. 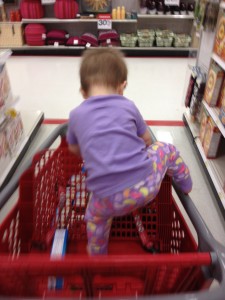 Let me out of here!

Knowing this could take a while—there were quite a few options available for all her shaking needs—I pushed the cart aside and sat down next to her. Hilly would grab a bottle, sometimes two, and shake and wave them in the air, and look at me, beaming. To me, this was the most important moment, the interaction. Children take their life cues from us; they absorb how we relate to the world and reflect it as they age. So as Hilly would look to me, I would smile and grab and shake my own pill bottles. It was my way of letting her know that she was doing nothing wrong, everything right, and that I was enjoying myself just as much as she was.

Which, of course, I was.

Discovering which vitamins carry which maraca tone was a much more interesting way to spend ten minutes in Target than actually shopping.

At some point, a couple turned the corner into our aisle. From my vantage point, all I could see was from knees-down, but I know they paused at the sight of a grown man and his daughter playing among the pill bottles.

“Oh…” sounded forth from what sounded like an elderly woman.

I didn’t need to see her to know she was smiling; the warmth contained in her “Oh” could have melted butter.

I looked up, and she and her husband were gazing down at me in a way only grandparents can, love glowing through their eyes.

Some people won’t understand a grown man sitting on the floor in Target shaking pill bottles with his daughter.

Here’s to hoping there are more of the latter on this planet than there are the former.