Inside the Arrogant Mind

I recently had an… let’s go with “interesting” experience at a favorite comedy club of mine.

Three women showed up, whipped out their phones, and proceeded to talk loudly while texting and Facebooking through the opening comic, the middle comic, and the first 5 minutes of my set. Such behavior isn’t all too uncommon in the world of comedy; the audiences are—bless them—sometimes a little less refined than those you’d find in legitimate theater.

I generally handle instances like these in a similar fashion: my opening salvo is said in a very genial tone, “Thanks for coming out. If you’re going to talk, could you go out to the bar?” I find this works much better than being nasty up front. But, when nasty is called for, I have no problem moving to: “Hey, shut the fuck up.”

Unfortunately, this is what happened the “interesting” night I am writing about. After asking politely for them to take their conversation to the bar, one of the woman gave me a dismissive wave, saying, “Don’t worry about us, you just do your job” at the same time.

I exhaled disappointedly; it is never my goal to have anything devolve into battle. But, as said, never do I shy from verbal war with someone looking for confrontation.

“I am doing my job,” I explained. “I’m up here telling jokes. That’s my job. Your job is to shut the fuck up and listen and laugh, but instead you’re flapping your pie-holes, so maybe you should get the fuck out.”

My question elicited both cheers and applause from the audience, the vast majority of whom were there to have a good time; they had paid to see comedy, not listen to three women blather on incessantly. I noticed the manager making his way over to the table, so I immediately went back into my act. There was no point in getting in any deeper with them; he had it covered.

The next thing I knew there was a sound of glasses falling and tables and chairs being knocked about. “Ma’am, you have to leave NOW” erupted firmly from the manager’s vocal chords. He wasn’t yelling, but his statement was very pointed. I missed it, but after he politely asked them to leave the showroom, a drink was thrown in his face; the bar equivalent of, “If they pull a knife, you pull a gun.” She was asked to leave, so she got uppity.

I knew all was lost for the moment. The audience had turned as one to the sounds of the scuffle, and precious few eyes remained on me. I very obviously took a drink of water, arching my eyebrows and adding a look of “Awkward” on my face. The several people who saw this expression laughed.

From the stage, with lights in my eyes, I was witness to only shadows. What I was able to discern was: shoving, followed by one of the women—a woman that could have easily played linebacker for the Oakland Raiders—swinging a hard fist, punching the manager in the face several times. Not enjoying the thrashing, the manager placed the woman into what looked like a full nelson.

The linebacker’s companions immediately piped up, shouting, “YOU LET GO OF HER! YOU LET GO OF HER!” Because, come on, if someone is rude, drunk, and punching you, you should let them continue doing so, right?

At this point the owner and several other employees were on the scene, telling the women firmly—using no foul language nor raising their voice to a yell—“You have to leave, NOW. NOW.”

Several members of the audience added to the verbal mix, shouting, “Get the fuck out!” and other such pleasantries at the women. No one wanted anything to do with their nonsense; they had proved themselves obnoxious and violent, which is no sane person’s idea of a good time.

The mix of silhouettes pirouetted violently into the side, emergency exit doors, and a jumble of human parts went spilling out on to the street. Shouting from outside wafted into the comedy club, “I’m calling the cops!” The manager, now bored beyond words with the whole ordeal, stated plainly: “The police have been called, please wait in the parking lot for them so you can be arrested.”

All the while, I stood on stage, calmly, casually, loading my phone with a video from YouTube.

When the exit doors were finally closed and all commotion had died down, I lifted the microphone to my phone, hit play, and the fail-horn from The Price is Right exited the PA speakers. Everyone laughed, and all tension broken I finished my set to really good response. The audience didn’t lose focus because of the disruption, it actually unified them: A multitude of people, united in the stand against disruptive behavior.

In all my years of performing, I have only seen forcible removals happen three times, and in each case one thought runs through my mind: What in God’s name were they thinking? I mean, in this particular case the women didn’t appear drunk, just oddly self-righteous in their insanely rude behavior.

Is common courtesy dead? I hesitate to go that far. Most audiences are fantastic, and even in any given gathering will you find only one or two people who just don’t understand they aren’t in their living room anymore.

For example: I had two women chatting up a storm once, and when I asked what they were talking about, they grew embarrassed and one said excitedly, “We’re sorry, we haven’t seen one another in three years and she just got into town!”

My response was a laughingly confused, “And you thought going somewhere where you’re supposed to be quiet was the right call? Susan! Great to see you! Let’s go a to a movie so we can catch up!”

Everyone giggled, the women blushed, and they were quiet the rest of the evening.

Like I said earlier, people generally respond to kindness or gentle ribbing. Sadly, every so often things turn ugly. I am forever confused by those who don’t seem to understand societal rules; people who talk during a performance or movie, or who piddle-fart with their phones at inappropriate moments. I really cock my head like a confused dog when disrespectful people take affront to being told, “Hey, you’re in the wrong here, asshat.”

Several years ago, a man in an audience of mine was intoxicated beyond words. He heckled the opening comic, passed out and slept through the middle comic, then woke up and tried heckling me after I had been on stage for about 20 minutes. I don’t remember what he started with, but my response was, “Hey, look who’s awake! Glad you’re back, but your input isn’t needed.”

His response was a slurred, “Fuck you, you’re not funny.”

Considering he had slept through the whole show, I thought it strange he would have such a concrete opinion.

I called for a poll: who here thinks I’m funny? 149 people applauded.  Who here thinks rummy should shut up, go back to sleep, or leave? 149 people applauded thunderously. Who here is having a bad time? The one drunken lout attempted to clap, missing his hands several times in the process; everyone else maintained silence. Even the three other people at his table were rolling their eyes, wishing he’d shut up.

“You hear that? You’re outnumbered, Custer,” I explained. “It’s time to shut the fuck up or go the fuck home.”

“Fuck you, you’re not funny…” he repeated.

At this point management arrived at his table and asked him to leave. The man’s response was an incredulous, “ME? I HAVE TO LEAVE? ME, NOT HIM?” He repeated this refrain as he was forced to stand. “Why am I getting kicked out? What about HIM?” Every time he shouted “Him!” he pointed at me, just so everyone was clear he didn’t care for my act. Which, as said, he had slept through.

He was escorted to the door—the whole time protesting the injustice of my getting to remain on stage while he was being removed—and the audience cheered his exit. Much like the event with the three women, the drunk’s belligerence united the audience, and the rest of the show continued to great success. But the rest of my time on stage I wondered what was going through that man’s mind. I mean, I understand an alarming volume of alcohol was coursing through his veins, but what made him think he was so right that everyone was wrong for enjoying themselves, or that it was appropriate for him to alternately sleep and yell to his heart’s desire?

I would love to interview a person in that situation, both immediately after the fact and maybe after a day’s grace. Find out if at some point they had a come-to-Jesus moment, or if they continued to think their actions justified. Actually, I’d love to interview them immediately after the fact, when their temperature is still up, and then show them the tape several days later. Would the several-days-later version of them agree with the behavior of the in-the-moment them?

Take the three women who were physically thrown out of the club: when the show started, they never turned off their phones, in fact used them liberally, and carried on full-volume conversation with one another throughout the first two comics. And they felt entirely justified in their behavior; nothing in them said, “You know what? We are being both disrespectful and rude; maybe we shouldn’t be here, or maybe we shouldn’t be talking.”

What part of poor parenting, poor upbringing, brings someone to that level of disconnect? What makes people go into a situation wrong-minded? Is it extreme cluelessness, or extreme narcissism?

I ask many questions, because I have no answers. I mean, I get the general audience member quietly checking Facebook during a show—we have become an easily distracted nation. If I see someone texting silently, I leave it alone. No need to call attention to anyone not actively trying to be the focus of what’s happening. But I do wonder what causes someone to believe the comedy showroom is their wedding altar and they’re that day’s princess.

I literally cannot wrap my head around it. 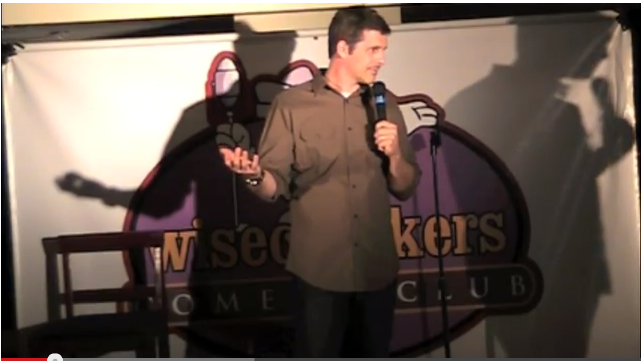 Video of me dealing with someone who just doesn’t get it.