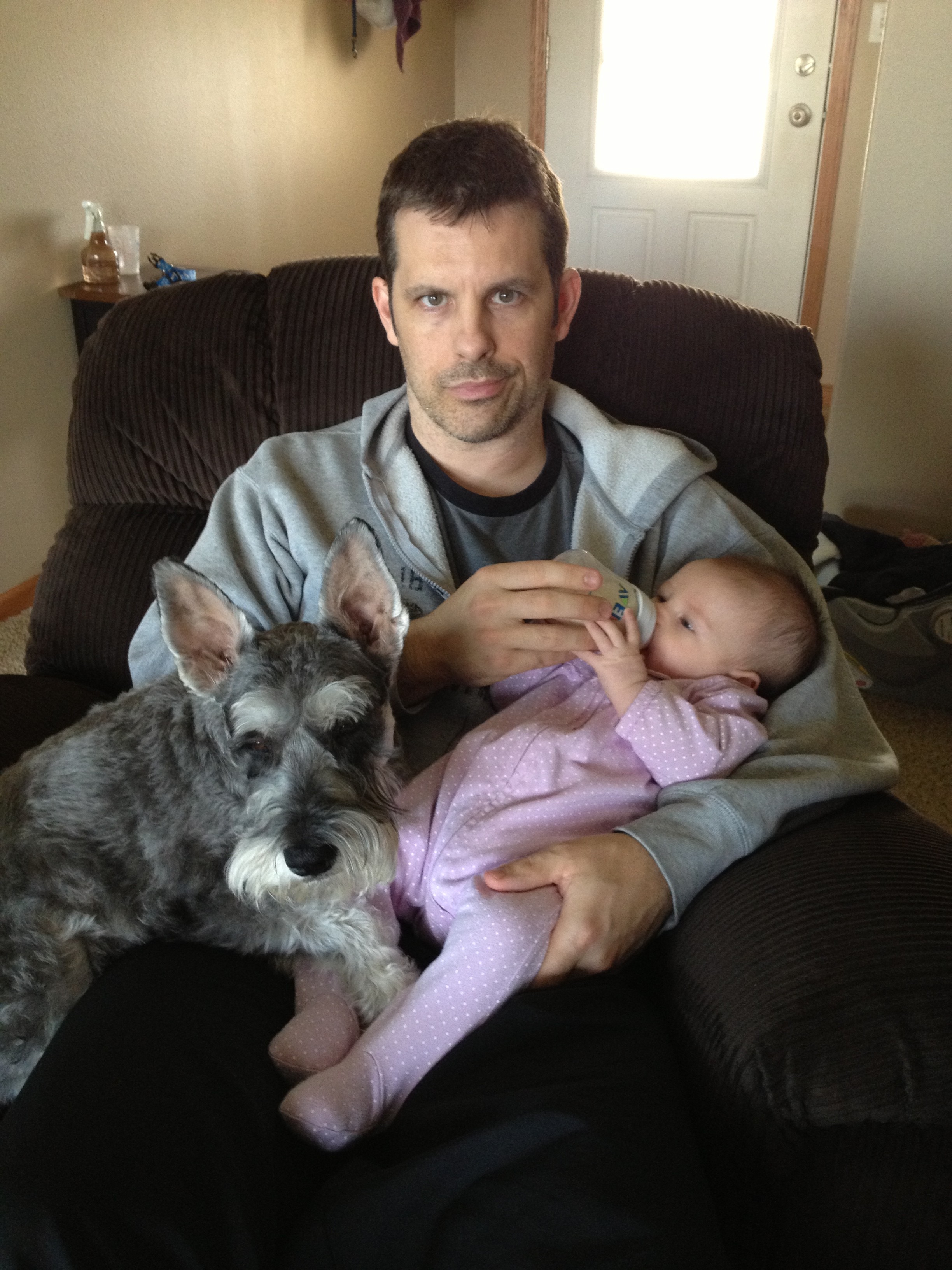 On December 2nd, at 1:10 in the morning, I awoke with a start. Something didn’t feel right, and it was my belly and body. I was warm, and felt immense pressure pushing up from my stomach.

I was going to throw up.

I left the bedroom and went out to the living room to assess the situation; was this a false alarm, or was I going to purge?

Twenty minutes later, at 1:30, I heard Hillary fuss in her room. My ears perked, but I made no motion toward her; she often makes little pig noises as she transitions between sleep cycles.

A few seconds later, I heard her gurgle, then choke and spit up. As I stood to check on her, she started crying.

Before I could get around the chair I had been sitting in, Kitty burst into view, headed from the master bedroom to Hillary’s room.  He saw me walking in his direction, and paused.

An alarmed picture painted across his doggy face, he looked at me, then full-body gestured toward Hillary’s room. If he could talk, I swear he would have said, “Come on, something’s wrong in there… We gotta help her!”

He darted into Hillary’s room, repeatedly checking back over his shoulder to make sure I was right behind him. As I reached into the crib to pick Hilly up, he paced anxiously on the floor, both eyes focused on her.

This isn’t the first time something like this has happened; once, after a particularly fussy morning, I finally got Hillary settled down—or so I thought—and retired to the bathroom for a little me time.

Within seconds of my buttocks hitting the toilet seat, a cry emanated from the living room. I sighed; there was nothing I could do now. She’d have to wait a minute or two.

Within seconds, Kitty was at the bathroom door. Concern showed deeply in his eyes. Like he would do the night of my illness, he stood in the bathroom door, looking at me, and constantly starting for the living room. Everything in his body language said, “She’s crying! Come on! Help!”

I sat there in wonderment; “He came to find me the instant she started crying. He knows… He understands.”

Lydia has made note of the fact that where Kitty used to run to the passenger door whenever she would return home from work, he now runs directly to the rear passenger side, where Hillary’s baby seat is. He jumps at the door, asking in his own way, “Is she in there?  Is my sister home?”

As we bring her into the house, Kitty jumps at the car seat we are carrying; after we set her down, Kitty shoves his sniffer right in her face, checking to make sure all is well in Hilly-world. After confirming that his human sister is indeed all right, he then looks to Lydia and I for pets, treats, and more pets. But his first concern has become Hillary.

When Lydia was pregnant, she asked, “How should we introduce the dog to the baby?” My response was glib, but honest: “Put ‘em each on the floor and let them work it out.”

Lydia didn’t like that, but it turns out to have been the best thing for everyone involved. When you approach a situation with fear and anxiety, you approach it in failure. When you are relaxed and confident, your chances for success increase greatly.

And I think that the doggy/person relationship we’ve encountered under our roof has been incredibly successful.