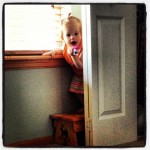 Eat, drink and be merry, for tomorrow we die.

I was one of two non-family members at Bryan’s wedding; he wanted to keep it small and personal. How I ended up there is an odd tale, as are most stories involving people who become your closest of close friends.

The 1990s was an exciting time of peace and prosperity America. The country wasn’t involved in any physical wars, a young Britney Spears was about to set the masturbation world of adolescent males on fire, William Jefferson Clinton was trying to convince a nation that oral sex didn’t count as infidelity, and in Milwaukee, Wisconsin, Bryan was a DJ at WLUM. At the time, WLUM was a “hip, cool” station, meaning corporate cool, or not cool at all; they were always in the toilet of the arbitron ratings and always re-inventing themselves. “We play the best alternative… *memo is handed* er, HARD ROCK there is!”

I was just beginning my comedic career, and Bryan got wind of a show I was promoting—a charity event for a little organization called the Make-A-Wish Foundation. He invited me to the station during the afternoon drive-time hours to promote it. During a break from the music, Bryan softballed an introduction my way: “Today in the studio we have a local comedian who is putting together a show for charity, Nathan Timmel. Nathan, can you tell us a little about your show, and the charity?”

“The show is for the Make-A-Wish foundation, an organization involved with helping, sadly, terminally ill children. It gives them a chance to experience one thing they always wanted to in life before passing away, such as visiting Disneyworld, swimming with dolphins, or having their first homosexual experience.”

Bryan cut my microphone, “And let’s go to commercial.”

Bryan was kind, said we might want to stay away from that kind of humor, and the interview went on and the show promoted.

“This is Judy Schwerm, Wisconsin president of the Make-A-Wish Foundation, and we are very upset with your on-air comments yesterday. First of all, we don’t like reminding our children they are terminally ill, but second and most importantly, to suggest that our organization would have anything to do with homosexuality is just in such poor taste. I can’t believe you would even think to make such a comment.”

Now, I am not a dumb person. The foundation was actually in the news at the moment for offering to help a kid shoot and kill a Kodiak bear, and there was under the table talk that they had, in fact, helped kids lose their virginity. I had ammunition aplenty in my guns with which to fire back at her, but I kept my finger off the trigger. She was calling me, so I knew WLUM was also being contacted. I didn’t know Bryan all that well and didn’t want to get him in any more trouble than I figured he was about to be in, so instead of fighting back, I was contrite.

“You know, that was all my fault,” I started. “Neither the DJ nor WLUM knew what I was going to say. The question was asked, and I thought I would make a joke. I’m sorry and take full responsibility for it.”

I was apologizing for suggesting a child be born with a biological attraction to the same gender to a bigoted woman being damned hateful, and this because of the fact I had been promoting a show in support of them. It disgusted me on every level, but I knew it would be my only shot at placating her blind stupidity.

How dare you, how dare you, how dare you. There are moments in life when you know you are dealing with a brick wall. No matter what the facts may be, no matter how much truth a situation may hold, some people would rather champion anger and ignorance, desperately clinging to whatever false ideal they believe the world should be instead of embracing the actuality of existence. I knew there would be no winning this battle, so I sat back and watched the easily preventable train-wreck of injustice occur.

The station fired Bryan. Whatever he had on file before my actions meant I was that ever-stressful last straw on the camel’s back, so to speak. They didn’t want to hear his side of things or stand up to the hatred and contempt of an egotistical woman run amok.

Bryan went home defeated, but apparently life hadn’t kicked him in the balls hard enough. His wife said “no mas”—an odd choice of phrasing as she wasn’t Spanish—and called for a divorce. Bryan was so stunned and depressed he gave her everything; the house, furniture, anything two people that say “Until death do us part” can collect over a span of years. Bryan was at his lowest of lows, and I was the hitchhiker he had picked up that reached for the wheel and ran the car into the ditch.

Oddly enough, he didn’t hold it against me. Using some misguided sense of optimism and insight, Bryan figured I was a catalyst for change, not the root of all-evil; this despite my guilt and thoughts to the contrary. Years passed, and we bonded until labeled by that phrase that enjoins only a few people in a lifetime, “Best friends.”

(Either that, or Bryan has been carefully crafting the best revenge ever planned, silently waiting to pull the rug out from under my life for all I did to him years ago in Milwaukee.)

We each moved to Los Angeles—me to give a go at getting on TV as a comedian; Bryan to work in the entertainment industry as well as escape the anguished memories Wisconsin held for him—and one day while out and about he up and met a woman named Natalie. Having been through the painful divorce process once already, Bryan believed he wasn’t ready for another serious relationship. She was interested in him, but Bryan wanted to keep things casual; why jump in deep when it only led to pain?

One of the most difficult tightropes to walk is that of living for the moment vs. preparing for a better tomorrow. Certain philosophies tell us that the past is gone, the future unwritten, and all we can do is enjoy the now. But if we take this to a hedonistic extreme, never keeping a wary eye on the future, it can lead us to ruin. Conversely, if we allow our time to be consumed by worrying about the past or future, we miss the goings on occurring around us daily. Examining my own past, my darkest moments would never have allowed me to escape had I not seen some sort of better future waiting. Like Bryan, while in my deepest of troughs, I suspected something better was across the horizon. I didn’t know what, but I knew I was simply in a phase, albeit a shitty one.

Regarding Natalie, I wish I could say I was articulate in my words, but sometimes you get a sense of someone right away; when you know, you know. Regarding Natalie, you knew. I told Bryan he was a fucking fuckhead if he let her get away.

Bryan let the past go and let the moment carry him where it would. They began dating more seriously, and eventually Bryan one-kneed himself in front of Natalie. Today they are married and have two young sons as a production of their union.

And though the events set in motion by the dense and angry as Judy Schwerm ended on a positive note, I can still hope that somewhere along the way she learned to either accept differences in others.