A Connection Worth Waiting For? 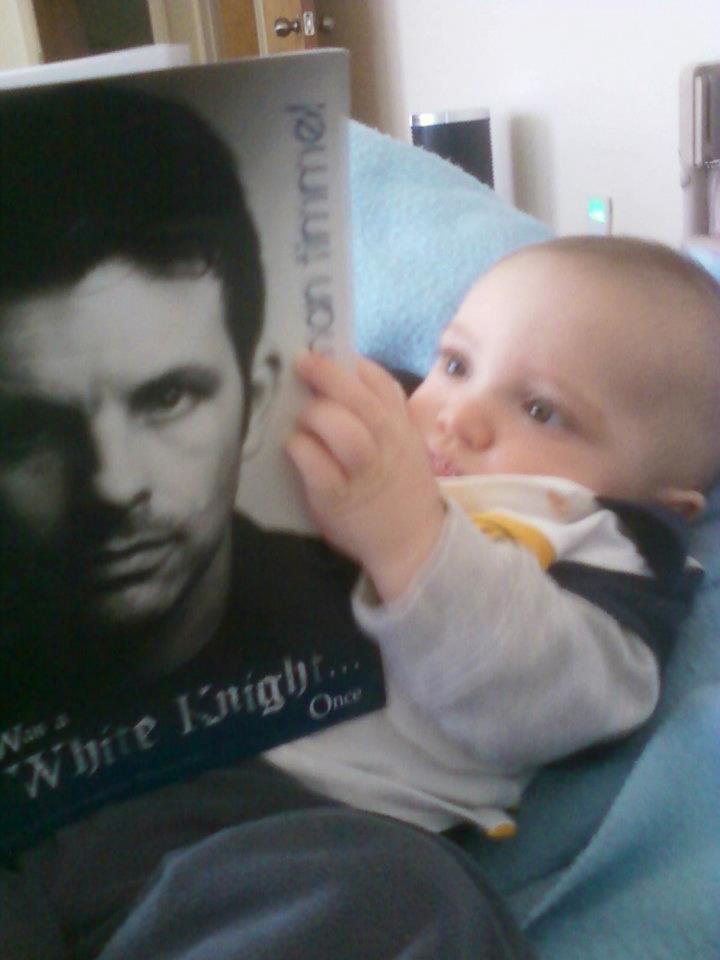 Lydia, my Mrs., had been feeling intermittent kicks and other sensations for a few days prior, but during the moments our little Peanut felt like doing twists, turns, and tumbles as she swam in her amniotic fluid, she did so away from the prying eyes of my ability to lay tactile witness.

“Ooh, now!” Lydia would beam, grabbing my hand and placing it on her belly.

“Dammit, she was just moving,” Lydia would pout.

But on April 9th, while lying in bed, reading before lights out, Lydia felt a squirm, grabbed my hand, and for the first time in my forty-two years of existence, I felt a baby I helped create move. There was a wiggle, followed by three very light thumps.

“Those were kicks?” I asked. They felt like taps; something on the inside of her trying to get out.

I paused, because I knew the wrong answer would get me in trouble. Though my first thought was of the movie Alien, and more specifically the image of John Hurt writhing on the cafeteria table moments before eruption, I felt it best to go with my actual emotion when responding: “It’s… weird.”

Fortunately, Lydia accepted this explanation, and left me to digest what was happening inside my brain.

I have dad friends who give me good advice, the most important of all being, “Don’t expect to have a connection with your baby immediately. All that crap about instantaneous bonds upon birth and eye contact? It’s horse shit.”

I like that, because it lets me know that what I currently feel regarding my Lydia’s pregnancy is normal.

And what do I feel?

Well, it’s not exactly “nothing,” but truth be told, it’s a little Strawberry Fields Forever: Nothing is real.

We’re halfway to the breach point, and her belly is definitely growing, but the truth still hasn’t exactly sunk in to my effective being quite yet. I am entirely aware my life will do a 180 when the little bugger pops out, and that nothing will ever be the same again, but until you experience something first-hand, no amount of mental preparation can make you actually feel something. Emotions and knowledge are two separate items in life, and never the twain shall mix.

I don’t know that I’m really looking forward to fatherhood, and not for the reasons I once had. I never wanted kids, because I never understood them. They cry, are a financial burden, and take up entirely too much of your time. There is no positive argument that can be made for having a child that can’t be equally argued against using logic. But, as said, logic and emotion make for a poor war front, and as much as I hate it, emotion has added a new level of apprehension to my impending parenthood.

If having a child is indeed hell, then Lydia and I traveled a purgatory of infertility to achieve her ever-rounding belly. According to the medical professionals, we had a litany of obstacles standing in the way of our achieving natural pregnancy: we were both college educated, neither of us is Mexican, and maybe more important than the first but less important than the second, my spermies and her eggs just wouldn’t meet. Basically, Lydia’s insides were on permanent vacation and not working all that well on their own. Eggs aplenty grew inside her, but they seemed content to rest inside her ovaries without venturing into the unknown land of the fallopian tube. Or, to sum all of the above up in one quick sentence: “Her insides were a rocky place where my seed could find no purchase.”

So, some wonderful eggs were laying in wait, they just wouldn’t make the trip to where my sperm could toss a Joey Tribbiani “How you doin’?” their way. For reasons never entirely decided upon by medical professionals—we apparently needed Dr. House for the actual reason—Lydia wouldn’t ovulate naturally.

To get to the point of pregnancy was a pain in the ass, literally; Lydia endured over 100 hormone shots in her keister. To me, this was advance karmic retribution for the pain in the ass baby she wanted to saddle me with. To Lydia, it was a nightly ritual that left her black, blue, and perpetually sore. It took two years of failed ideas and two cycles of IVF to combat the “lack of ovulating” issue successfully. As the talented comedienne Raleigh Weld put it so eloquently: “[Pregnancy] It’s not as easy as unwed teenagers make it look.”

Now that baby-time is approaching, emotions have crept their way into my brain, and worry is setting in. Not that negative thoughts are ever-present, yet, but they are out there, slowly circling me, like predators eyeing wounded prey.

Lydia and I went to the hospital for a routine checkup. Like a tune-up with your car, they would kick her tires and make sure everything was running smoothly. And, for shits-and-giggles, do an audio-ultrasound, just to give the heartbeat of the little fetus a listen.

The doctor placed the Doppler/microphone on Lydia’s belly, and pushed down. Hard. A little too hard for my ignorant eyes.

“What if she crushes its diminutive head,” I thought, watching the doctor fiddle around.

The doctor used the microphone as if playing a game of hide-n-seek or Where’s Waldo with the fetus, pausing, pressing, moving, and pressing it in once again. Repeat. Repeat. Repeat. All the while, nothing but loud static erupted from the speakers.

I sat somewhat cluelessly jovial, looking around, waiting for the moment we would be told, “Everything’s fine; go home and play video games” or something similarly kind.

After a few moments, however, I realized something: almost a minute had gone by, and no heartbeat had yet sounded.

Within a millisecond, my stomach dropped lower into my body than it ever has before. The crippling panicked thought, “Oh my God, what if the baby is dead?” came screaming into my mind like a Mack truck spun out of control.

“Faster than the speed of light” is the most used comparison when lightning-quick description is needed, and it is with that unfathomable rapidity a million-and-one thoughts flashed across my mind in a jumbled fury: “How will Lydia react? What do we do now? Do they take it out immediately? Are they going to schedule an appointment for a week from now, leaving it in there to rot? Will this prevent her from being able to become pregnant again? Will having this inside her poison her? Is Lydia OK? How the fuck can anyone ever believe in God knowing that things like this happen?”

And then, maybe a few seconds later, a quickly rhythmic, static-encompassed heartbeat reverberated from the speakers.

The doctor smiled warmly, saying, “There it is.”

And in an instant, my entire body relaxed; as quickly as it had gone into shock, comfort overcame me. I sat in the office somewhat numb, trying to understand what exactly had just happened to me.

Unfortunately, that moment was only the beginning of my worry; now I have a litany of questions and situations lining up to freak me the fuck out. “What if the blood tests come back and say the baby has Down Syndrome?” How do you react to that? Sarah Palin may have bravely and lovingly said such a detail made no difference to her, but she’s an IQ point away from mental incapacity herself. I worked in the field of home health care for a half-dozen years, tending to the requirements of two special needs adults. I was completely burned out by the end of a single shift; how the hell would I react to a 24/7 life of such demands on my life?

After the baby is born, it gets worse; I have to worry for years upon years about SIDS, autism, disease, child molesters, abduction, teen pregnancy, depressionsuicidedeath…

I make jokes about my impending eighteen-year headache, but I know all too well that it doesn’t end there. Parenthood is a long journey, one best described by Jason Robards in the movie named after the state of existence: “It never ends; it’s like your aunt Edna’s ass. It goes on forever and is just as frightening.”