Touched by Anything but an Angel 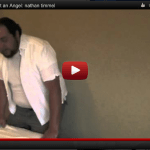 This story begins innocently enough: My wife bought a cheap massage using Groupon. When she called to make a reservation, she was unsettled by the outgoing message on the masseuse’s voicemail. She didn’t explain exactly what “Creeped her out,” but told me I could have the massage for my birthday.

(Which, if you’re not married, is the definition of love: “Here, I don’t want it, you can have it. Oh, and it’s your birthday? Good, I was, um, thinking of you the whole time.”)

Unfazed by her concern, I called the number and heard a voice, one I can only describe using a movie reference.  You know the scene in Silence of the Lambs when Buffalo Bill is dancing in his skin suit, saying, “I’d fuck me. I’d fuck me so hard…” That was the specific voice asking me if I wanted a massage: “You’ve reached ‘Body by Bob.’ I can’t take your call right now…” I immediately understood why Lydia walked away from her thirty dollars.

Like an Army engineer defusing a roadside bomb, I had a split second decision to make: red or blue wire; hang up or leave my number? Massages are always good, yes, but one from a man? That would be wrong on every level. But, would it be… funny? Something I could use in my act?

I left my number, and Bob returned my call the next day. Groupon had him as busy as a worker bee, but he did have an opening Monday, several days from the current moment. His speaking voice sounded slightly less off-putting than his recorded one, so I went for it: I made an appointment to have the non-tender touch of a man rub my aching muscles.

Bob said his business, like many massage parlors, was located within the walls of a gym. The symbiotic relationship such marriages create work nicely; people push their muscles into knotted little balls, and massage therapists smooth them out immediately. It’s win-win for everyone. I had never heard of the particular gym he leased from, but pulling up I knew its type: dying. The place was a relic of the booming 1980s, when Jane Fonda had the world interested in aerobicise and fitness centers sprouted like weeds. Unfortunately, the place hadn’t been renovated since that decade; when I walked in I took immediate note of the threadbare carpet, faded wallpaper, and septuagenarian clientele. This wasn’t where people went to get into shape, it’s where fitness went to die.

A few feet from Biff stood someone I could only imagine was the janitor. He was overweight, balding in the worst way, and looked like Stephen Colbert’s description of Karl Rove: a Christmas ham with glasses. (I originally described him as a pedophile version of Karl Rove, but it was pointed out to me that Karl Rove looks like a pedophile version of himself, making the joke moot).

When I say he was “balding in the worst way,” I mean that he was fighting genetics as best he could using denial as a weapon. He was 98% bald on the crown of his head, with a ring of shaggy “I’m-growing-it-long-here-because-I-can” fur from ear to ear. The 2% atop his head that still had “hair” was actually nothing but a strand or two, like Homer Simpson. If a person is going bald, shorter hair looks better; it shows acceptance. Whenever I see a balding man growing his remaining wisps long, I want to pull him aside and explain, “You’re not fooling anyone, and what you’re doing looks awkward.”

I asked Biff about “Body by Bob” and Karl Rove’s ears perked. He stood and made his way over to me, extending his meat-paw: “You must be Nathan,” he smiled.

I knew two things immediately: One, had Lydia actually made an appointment with this creature, she would have walked out immediately upon seeing him. Two, I was absolutely going through with the massage, just for the story.

As Karl/Bob led me to his therapy room, I started thinking of the comments on my Facebook wall; I had posted that I was on my way to a massage, one given by a man, and my friends had started in immediately. “Guaranteed happy ending!” “Big, hairy hands,” and “He’ll be massaging you with the same hands he uses to jerk himself off.”

The last comment was the most disconcerting. Not because I imagined he would have just pleasured himself before touching me, but because, as I said, he was overweight. Now thoughts of his little fat-guy penis—probably a thumb-sized appendage barely able to say “Hello” through the matted pubic hair—were violating my imagination. The thought of him holding it, then rubbing my temples while cooing, “Relax… relax…” was not appealing to me.

As if on a date, everything started with a little small talk. Karl/Bob made a very obvious, ham-fisted aside about “his wife,” because that way I would know he was straight and that he wasn’t interested in me (or small children). Unfortunately, he defeated his own comment with an immediate, awkward chuckle. You’ve heard this laugh; it’s the cover someone gives when they need an out from their previous statement. Men usually use it when dealing with attractive female friends they’re attracted to: “Wouldn’t it be funny if we went on a date HA HA I’M JUST KIDDING BECAUSE WE’RE JUST FRIENDS!” In this instance, it was a laugh that said, “Oh, I’m not married. You know this, and I know this, and I know that you know this, but I’m trying to diffuse the awkward situation for both of us.”

After the pre-touch interview, he finally said, “Undress to your level of comfort,” as all massage therapists do. I thought, “Can I add a layer to what I’m wearing now?” but as would happen for the entire hour, my internal voice remained just that: internal.

He left the room, and for the first time in my career as a receiver of massages I left my underwear on. I had the thought, “In for a penny, in for a pound” and almost went full monty, but in the end couldn’t. As much as a nice glute massage from a woman is a wonderful thing, I decided to retain any tension I might have in the buttocks. My underwear remained in place as a line of demarcation.

I laid face down—the most vulnerable position—and wondered where the day would take me. Bob/Karl came tiptoeing back in a couple minutes later, asked if I was ready, and again I thought “No” without verbalizing it.

He began by laying his hands on my back, over the covers, and asking me to take a few breaths.

“Breathe in,” he would command, and I would. “Breathe out,” he would request, and as I did he pushed down on my spine. It wasn’t too horrible. But a few moments later, I heard an unsettling sound. Now, I had known the moment was coming, but somehow had convinced myself it wasn’t really going to happen. He pulled part of the cover aside to go to work, and I heard the pump action of a lotion bottle. Lotion is a staple of the massage industry, and makes smoothing the muscles easier, but at that moment in time the thought a fat man with meaty sausage-fingers was about to lube up and rub me was… well, it’s hard to describe. It wasn’t disconcerting, it wasn’t enticing… basically, I had to stifle a giggle. If anything, it was amusing.

Bob/Karl worked my legs, moved to my back, and started from the shoulders down. In a bold move, he seemingly half-ignored the barrier my underwear provided. Not that he went entirely up and under them, but like a teenage boy testing the waters, slid his fingers gingerly under the elastic band, playing that game I played a thousand times so well as a teenager. It was the backrub game, where, sure, she was shirtless, but since she was on her stomach you weren’t doing anything sexual. It was just a backrub, right? Completely innocent. You just reached lower and lower, every pass sliding fingers past the jeans and under the underwear a little further until she lifted her hips ever so subtly and granted you access to everything underneath.

Thankfully, Bob/Karl stayed just a little north of my un-comfort zone and never even attempted to slide a finger across my crack. The entire time it was happening I simply pretended he was a bear (hooray for double entendres!) and played dead; no access for you, fatty.

As he had returned to my back, he wanted to apply the same pressure techniques as earlier in the session. But, as we were now twenty minutes into things and I was supposed to be in a deep, meditative sate, he didn’t want to break my trance. Earlier he had spoken in a normal speaking voice; this time he leaned in and was so close I have to admit slightly startled me, and whispered, “Deep breath in…”

It was the kind of raspy murmur you would hear right before something bad was about to happen, one normally followed by the sexual, “Liked that, didn’t you?” Again, I had to will myself to not laugh.

Overall, the worst part of the whole ordeal was the music. When receiving a massage, most therapists play ocean waves or yogic chants to relax you. My room was filled with the dulcet tones of Enya. Not just Enya, but her album Shepherd Moons. The same goddamn album I played back in the 1990s during my massage games with nubile girls. As I tried to relax them out of their clothes, Enya would coo to them, making them feel safe and relaxed. The only thought I had as Bob/Karl was kneading my muscles involved my Shakespearean background and the words, “Oh cruel fate…”.

Everything ended rather anti-climactically, and for that I am thankful. He did indeed give me a little facial rub, and again I thought back to the idea of him touching himself and then me. It was unnerving, but oh well.

When finished, Bob/Karl whispered that he was going to step out of the room, and wanted me to ponder upon two questions: What was my favorite part of the massage, and what could he do to make it better? Naturally, my first two responses went unsaid: One, “The shower I’m about to take,” and two, “Look in a full-length mirror and realize you need to make a career change.”

His parting shot was probably the most hilarious moment, given how I had gotten wrapped up in this mess. He picked up a couple business cards, handed them to me, and smiled, “I’m around over the holidays, so if you’d like to give your wife a massage as a gift…”

If only he knew.